Before the first Earth Day celebration in 1970, the City of Madison established the first curbside recycling collection in the nation when it began collecting newspapers in 1968.

During the past half-century, the waste management program in Madison continues to grow and change, but there is still need for improvement. 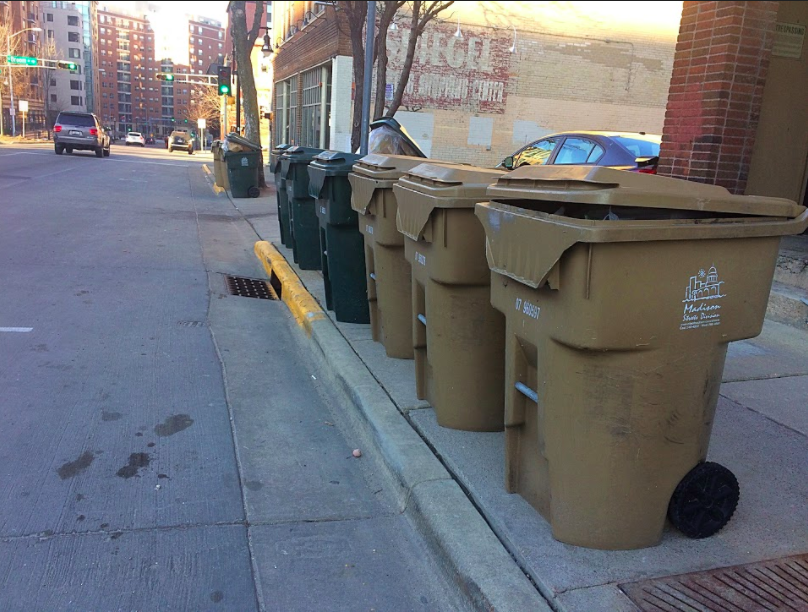 “Nearly 60 percent of all the waste we generate as a city is recycled, which is fantastic. But that also leaves plenty of room to get better,” said Bryan Johnson, the City of Madison Recycling Coordinator.

According to the EPA, the United States recycles about 35 percent  of the waste it creates.

When it comes to recycling, Johnson wants Madisonians to remember that there are services beyond  the green carts at home.

Motor oil can be recycled at various drop-off sites, and Dane County’s facilities also help with recycling construction and demolition waste.  Currently there is no publicly maintained waste oil drop-off site on the west side of Madison, but private businesses also collect oil. Johnson said it is easiest  for residents to take their oil to a mechanic shop or quick oil change facilities.

The City even recycles the brush collected from the streets, which is turned into wood mulch, and Purple Cow hauls away and composts yard waste material like leaves and plants.

“There are many private entities that perform recycling work from electronics to construction and demolition material to polyurethane foam and on and on.  We are awash with recycling opportunity, which is great,” Johnson said.

What happens to our recyclables after they are tossed into the bin?

Madison began contracting with Pellitteri Waste Systems in 2012 to process the city’s recycling at their material recovery facility (MRF). Pellitteri then charges the city a “tipping fee.”

Once they are dropped off, the materials are separated into their respective component parts. For example, all of the paper is put with other various collected paper.

First, workers separate the material to pick out any contamination from the bins using their hands.

“This is something people don’t realize. There are folks whose job is to stand over this conveyer belt and grab all the stuff that doesn’t belong in the recycling,” Johnson said.

Then, the recyclables are sorted into metal, plastics, glass and paper through a series of screens, sensors, conveyors, magnets and more people.

The current contract with Pellitteri allows for the profits from selling the recycling commodities to cover the tipping fee. Any additional profits are returned to the city.

Johnson said the City of Madison Streets Division budgets that the annual recycling commodity sales will total approximately $900,000. The tipping fees to Pelliterri amount to around $875,000 a year. Once these tipping fees are covered, the remaining $25,000 is used to pay for other Streets Division services. If the markets produce a return above what the city budgeted that money goes into the city’s general fund.

“The amount for the commodities is broken down by the ton, and it fluctuates by the month, and it varies by material type. For example, in January 2018, we received $35 a ton for paper and $95 a ton for cardboard.  The prices are all determined by global market demand,” Johnson said.

To better visualize the route of recyclables, Pellitteri Waste Systems made a video showing how they sort and collect the recyclables for the City of Madison.

How does recycling impact the Madison community?

Recycling has a big impact on Madison, in addition to slowing the depletion of the Earth’s resources.

Economically, hundreds of jobs in the Madison area are connected to recycling material from collecting it, to processing it, and even making new items.

On an environmental and local level, it is easy to see why recycling matters firsthand after taking a look at the Dane County Landfill. Johnson thinks the landfill has about 20 years of space left as it is constructed now.

A new landfill would be expensive, likely because it would be further away from Madison. On the political side, a new landfill could also have negative effects on surrounding neighborhoods.

“When the landfill is at capacity, the only option is to change usable, productive farmland into a space to bury the junk we don’t want. It would be a shame to lose such valuable land to be a depository for our unwanted stuff,” Johnson said.

Where is there room for improvement in our recycling stream?

The City of Madison started out as a leader in recycling, but some individuals like Peter Anderson argue that the system is lagging behind in some areas. Anderson has been involved in waste and recycling advocacy since 1989, and he is currently the president of Recycle Worlds Consulting.

Aside from the current collection practices, Anderson thinks Madison would benefit from offering a separate collection of food scraps, which would make food scrap diversion simple and convenient.

“Getting the food and paper out of our trash bins is one of the critical things that all of us can do to help reduce the threat of global warming” Anderson said.

Madison has had a food scrap collection program since 2011, but it is only able to serve about 1,100 homes and around 40 businesses with the program at present because, as the Isthmus reports, “the compost has nowhere to go.”

This year will be a big one for the city’s nascent organics and food scraps program, according to Johnson.

“Luckily, an anaerobic digester in Middleton recently installed de-packaging equipment that is designed to remove food scraps from its packaging. It’s not really the perfect machine for post-consumer contamination control, but it may very well work,” Johnson said.

Johnson said that a major goal of 2018 is to help improve the communication around recycling services in Madison and re-examine current programs.

Since Madison switched from a dual to a single-stream curbside recycling collection in September 2015, there has been an increase in recycling but contamination remains a challenge. Last year, Johnson said 8 percent of what was put into the green carts at residential homes could not be recycled because the bins were contaminated with things that could not be recycled like greasy food wrappers or clothes.

While contamination is a fixable problem, other big challenges with recycling are outside of the city’s control.

Market fluctuations impact what happens in Madison, according to Johnson. China, for example, made changes to the type of scrap material they are willing to import. They also set strict regulations about how much contamination they will accept in the bales of plastic, paper, and other materials that get sold into their country.

Johnson said this change by China caused the City of Madison’s rigid plastic recycling program to end. The rigid plastic program allowed residents to recycle anything that was a very hard plastic. It was a single place for hard plastic buckets, lawn furniture and children’s toys that cannot be put into the green recycling cart at home.

“The changes by China have also impacted the price we get for paper. China was a big consumer of paper, but since they have such exacting importing standards now, it creates more supply for material domestically, which of course suppresses the price,” Johnson said.

The City of Madison currently holds the goal of sending zero recyclable waste to the landfill by 2050. Johnson thinks there is plenty of time to get there – but it won’t be easy and will come at a cost.

For example, around 25 percent of what is in the garbage is compostable food scraps. Subtracting these from the waste stream would be a big step toward meeting the city’s goal.

“To reclaim the food scraps will take investment not only in the machinery that removes all the stuff that won’t compost, like plastic bags, but also in the mechanisms that can capture the methane released by food scraps and process the scraps into compost. There will also need to be investment in people, collection carts and collection vehicles – maybe even a place to park those vehicles,” Johnson said.

“The downtown density and outward sprawl will both be challenging, especially with how we provide recycling services for stuff that cannot go into one of our collection carts or the private recycling dumpster that services their apartment building. Residents in these towers will have plants that need composting, and folks on the outskirts have batteries and other electronics that need recycling,” Johnson said.

Will the two existing drop-off sites at 4602 Sycamore Ave. and 1501 W. Badger Rd. be adequate and convenient enough to service all these residents, especially as the city continues to grow?

In general, the city will need to continuously balance the need for recycling services to be convenient  while still maintaining cost effectiveness.

What the most commonly mis-recycled items?

Items are often put into the recycling cart by mistake. Johnson has heard the term “wish-cycling,” where people wish an item could be recycled, so they put it into the cart.

There is not one glaring item that Pellitteri finds in the recycling carts over and over again that jumps out as something that cannot be recycled in the system—all kinds of items are mis-recycled.

“If we could get away from putting anything ‘tangly’ into the cart that would go a long way. Clothes, Christmas tree lights, improperly packaged plastic bags – all of those pose a problem to the sorting machinery because it can get wrapped around the equipment, and cause the plant to shut down when they have to untangle the wires,” Johnson said.

Madisonians should also consider that:

When it comes to recycling, plenty of questions may come to mind. Madison residents can access the Recyclopedia by picking up a copy from their library branch or downloading it from City of Madison Streets Division’s website (https://www.cityofmadison.com/streets/documents/Recyclopedia2017-web.pdf).

The MyWaste App for Madison also is available on web app stores for free, and most home recycling carts have a guide on the lid.

If residents have a question about an item and can’t find the answer in the Recyclopedia, they can send an email to streets@cityofmadison.com or call the Streets Division office at 608-266-4681 or 608-246-4532.

“There’s such a big universe of stuff out there we may not have the answer right away, but we’ll figure it out,” Johnson said.