In an announcement made last month, the Wisconsin Department of Agriculture, Trade and Consumer Protection announced that starting Friday March 30th, the entire state will be placed under quarantine for the invasive emerald ash borer.

The quarantine prohibits moving firewood from quarantined areas to non-quarantined areas, and will require that business handling ash wood and untreated ash products work with the USDA Animal and Plant Health Inspection Service to adhere to protocols that reduce the risk of transporting the insect to other areas. 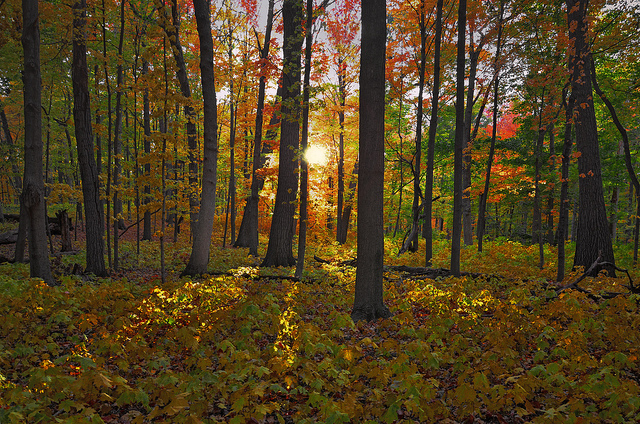 An autumn aftenoon in Wingra Woods, in the University of Wisconsin-Madison Arboretum (Richard Hurd/Wikimedia)

The emerald ash borer is an invasive beetle species that feeds on ash trees, and has been destructive to American ash tree populations. The beetle was first found in Wisconsin in 2008 – now, it has been recorded in 48 of Wisconsin’s 72 counties.

Emerald ash borer quarantines were previously enforced at the county level, but the growing extent of the infestation prompted the statewide quarantine. At present, all but two counties in Wisconsin have either confirmed the presence of emerald ash borer, or border a quarantined county in Wisconsin or a neighboring state. The Wisconsin Department of Natural Resources estimates that in the Midwest, 50 million ash trees are currently dead or dying because of the emerald ash borer.

Typically, emerald ash borer infestations spread when ash wood that still contains the insect or its larvae is moved to uncontaminated areas. According to Brian Kuhn, Director of the WiDATCP’s Plant Industry Bureau, firewood is one of the most common ways the insect is spread.

To minimize risk, Kuhn recommended purchasing firewood near where one intends to burn it, or purchasing wood bearing certification that it has received a heat or chemical treatment to eliminate pests.

Trees affected by emerald ash borers may display dead branches and discolored leaves near the top of the tree, splitting bark along the trunk, and unusual growth of new branches at a low level on the trunk.

More information on diagnosing and responding to emerald ash borer infestations can be found through the WiDNR.