A good indication of Madison’s current view of its bus system is how transit rates relative to other transportation items in the TIP, otherwise known as the Madison Area Transportation Board’s Transportation Improvement Plan. A Spring ritual in the transportation world is to quietly start the process of updating the next year’s TIP, which gets finalized in the Fall. 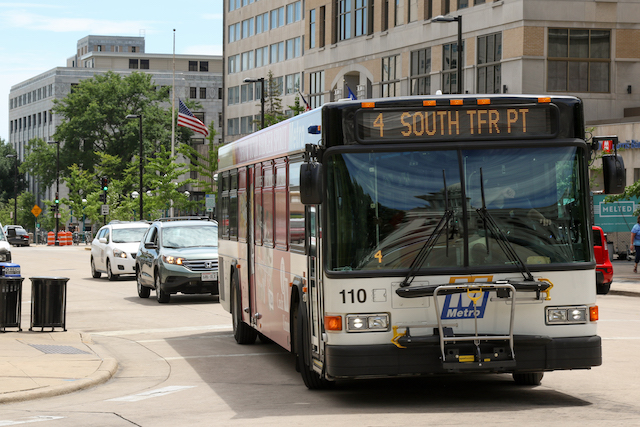 The TIP is a compiled listing of planned short-range projects. By May, Madison’s engineers responsible for road/street and pedestrian/bicycle projects have already presented drafts of the TIP to oversight bodies, such as the Board of Public Works, the Long Range Transportation Planning Committee and the Pedestrian/Bicycle/Motor Vehicle Commission. Unfortunately, neither Metro Transit nor the Parking Utility has exposed their oversight committees to that level of public scrutiny, nor do they appear to intend to do so. Too boring? Not if you want citizen oversight.

TIP project lists are financial documents whose quiet rollout (or non-rollout) belies their importance for the following year’s budget, how it prioritizes spending and how it ultimately influences the property taxes for city residents. Public works and transportation account for one-fifth of Madison’s 2018 operating budget of almost $315 million. while debt service accounts for another 15 percent, much of which should be attributed to transportation. The capital projects listed in the TIP constitute 42 percent of the city’s Capital Improvement Plan (CIP) of $334.5 million in 2018. Nearly half the CIP funds are borrowed and contribute to the debt service itemized in the following year’s operating budget. If anything, that debt service will be increased next year, not decreased.

Project listings are plans, not commitments. Projects might never happen, be postponed or end up looking very different than originally envisioned. And although the TIP lists items up to five years into the future, the ones listed for the first year tend to be the most accurate; items listed in later years may best be thought of as wishful intent. No matter how feasible the project, they must be listed in the TIP to be eligible for federal funding assistance. Thus, transit listings tend to be limited to items that have a public part to them. It is noteworthy therefore that the latest TIP does not include any mention of an intercity terminal even five years out.

Part of what makes the items listed in TIPs so important is that they include anticipated cost, which includes funds from federal, state or local governments and includes the general function performed for that cost (planning, engineering design, real estate and related costs, construction etc.). In the latest 2018-2022 Plan, transit listings did not follow this template, but appeared to adhere as closely to it as was possible given Metro’s own accounting methodology.

Metro Transit is not the only transit item in the Transportation Improvement Plan of course, but it is far and away the largest. Madison may only comprise about half the area of the Transportation Planning Board, but it used to comprise a much larger part in the past, at a time when public transit was actually seen as an asset. The TIP also includes a job ride program, a vehicle repair and loan program, a vanpool program, the shared-ride taxi programs of Stoughton and Sun Prairie, the limited transit service of the city of Monona, and several specialized transit programs of Metro, Monona and the county. The 2018-2022 plan also lists intercity bus service by Jefferson and Lamers bus lines although it does not list a terminal for them to use.

Maybe the listings are not intended to be as off-putting as they are, but they are technical and difficult to understand. To attempt a rough “educated” estimate of the “local” funds allocated to different types of projects is thus risky but necessary, the alternative being to make no guess at all. The following appears to be the estimated cost to local funds of city of Madison transportation projects for 2018 in the TIP according to general categories: (1) parking - $52,694,000; (2) roads/streets - $34,593,000; (3) transit - $20,729,000; (4) pedestrian/bicycle - $5,071,000.

The difficulty in generating those figures, whether they have merit or not, raises the question of how well anyone, including alders, understands the prioritizations being made in the budgets they vote to approve or modify.

Are the votes of alders consistent with their own and/or their constituents’ priorities? If alders understood better would they decide differently? Would they allocate transportation funds differently? Would they allocate less to transportation in general and more toward other items such as parks, libraries, skating rinks or golf courses? A good place to start could be to ask the Finance Department to generate figures similar to, but better than, the ones above. It does such a marvelous job with the budgetary figures it puts out, could it do something similar with TIP figures?