As one of the world’s oldest art forms, pottery has proven to be an invention that can preserve the history of our ancestors and build community. The Dongzhu Pottery Studio at 1925 Monroe Street aims to provide the Madison community affordable access this “humbling” art form for both youth and adults alike. 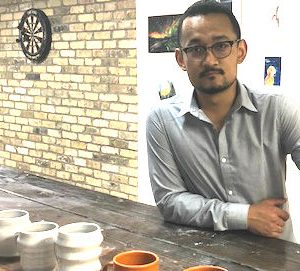 Lejia Dongzhu in his studio

Founded by West High School alum Lejia Dongzhu, the Dongzhu Pottery Studio has been open since November 2, 2017, and has been thriving for seven months. For Dongzhu, who also works as a and Financial Specialist at the University of Wisconsin-Madison School of Medicine and Public Health, this studio’s creation is a result of following his gut and going for it.

Originally from Tibet, Dongzhu came to Madison in 2005 and has had his hands in ceramics for the past seven years, since he was introduced to ceramics through an art class at West High School. He credits Phil Lyons, one of his past teachers, with igniting his passion for the art form. From spending hours perfecting his craft at school each day to attending summer camps, pottery became an important part of Dongzhu’s life. After college Dongzhu followed his dream of opening his own business by revisiting pottery with plans of opening up his own studio.

“I didn’t really think through it too much. I just knew I wanted it and I can afford it and the rest is kind of history,” Dongzhu said.

Dongzhu’s decision to “go for it” and make the studio a reality was informed by a family tradition of “stepping outside of [his] comfort zone.”

“My mother, when she first decided to go to Europe to study, everyone in the family was against it then my great-grandmother, which is her grandmother, was the only one who supported her decision to do it,” he said. “Even when I started this I don’t think anyone was in favor of it.”

After doing research Dongzhu found that membership to local nearby studios would run members up to $100 per month. His main goal was to offer an affordable studio accessible to anyone interested in learning more about the craft. As luck (and hard work) would have it, the Dongzhu Pottery Studio has seen support from the community and Dongzhu’s close friends.

Pottery made at the studio can be found at the Dane County Farmers Market and the Monroe Street Farmers Market. The studio also hosts a gallery series once a month which includes a wide range of art.  Local artists are also encouraged to submit their work to be put on display inside the studio.

“Now that I started I can’t quit,” he said. “We’ve been open for seven months and I don’t have any sign of stopping right now.”