For 70-year-old Annette Hull, this year was her 20th year celebrating Juneteenth, or the historical end of slavery, and her 10th year marching in Madison’s Juneteenth Parade – while wearing a used wedding dress.

“It’s all about love,” Hull said, “God is love, and love is good. The only way we can survive in this world, you gon’ have to love somebody.” 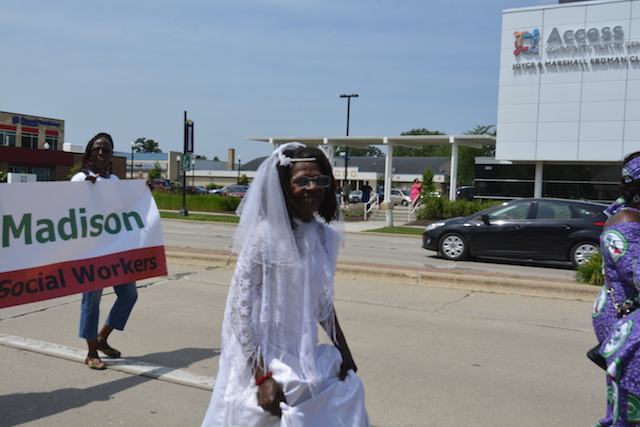 Junteenth is a national holiday on June 19th commemorating the abolishment of slavery in Texas 165 years ago. This year marks the 29th year Madison residents are celebrating Juneteenth, and 21 years since the Juneteenth Parade was first brought to life.

Hull, a South-side Madison resident, moved to Madison from Louisiana 20 years ago. After her parents passed and her separation from an  abusive ex-husband who she married at 19, she moved to Madison to start a new life. One day 10 years ago, Hull decided to march in Madison’s annual Juneenth Parade wearing a wedding dress to celebrate the joy of Juneteenth and the unity it brings to the Madison community, but also to bring a message of  love. 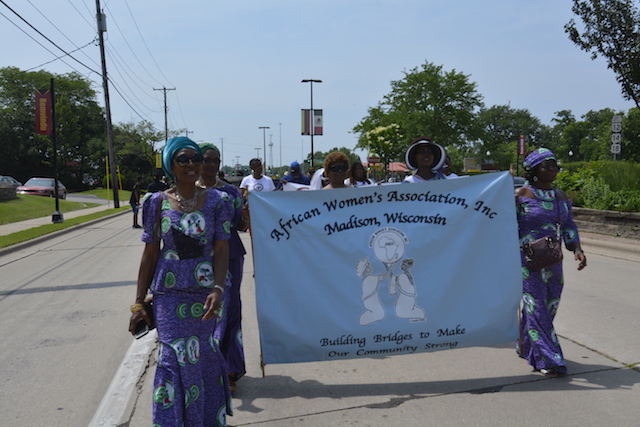 Members of the African American Women's Association march in the parade

“When I got married I had such an ugly dress. It was a used dress and my marriage didn’t work. I know that God want us to marry and have babies – this is a worldwide thing. People get married almost everyday,” Hull said. “So I decided one day I wanted to do this for Juneteenth to try to put out to the world that marriage is good if you find the right partner.

This year, Hull wore a veil and a white wedding dress she bought for $5 at a local thrift store. She remembers every June 19th as a family reunion for the black community and Madison community, a day once a year where folks all over Madison come together to share love and community through song, dance, games and food.

The vision for the Juneteenth Parade devised in 2007 by Jacqueline Hunt’s and Annie Weatherby Flowers was to bring a sense of unity and to integrate Madison’s youth in a celebration of community and black culture. Logistics and planning for the event were organized by the Kujichagulia Madison Center for Self Determination, a local non-profit that promotes events on African culture. 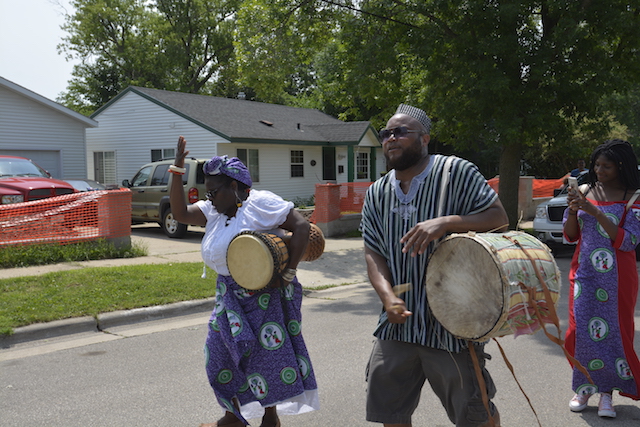 “The goal of the parade is to allow the community to see people of color in a positive way, and to give the youth from the different communities an opportunity to be apart of something. That was how it was created and it has evolved and changed over the course of the years,” Hunt said.

Led by a procession of fire trucks and motorcycles, the parade started at 11 a.m. in the parking lot of the Fountain of Life Covenant Church and ended in Penn Park. At Penn Park were clothing and ethnic food vendors and activities for kids, like double dutch and a main stage for spoken word and people to showcase their talents. 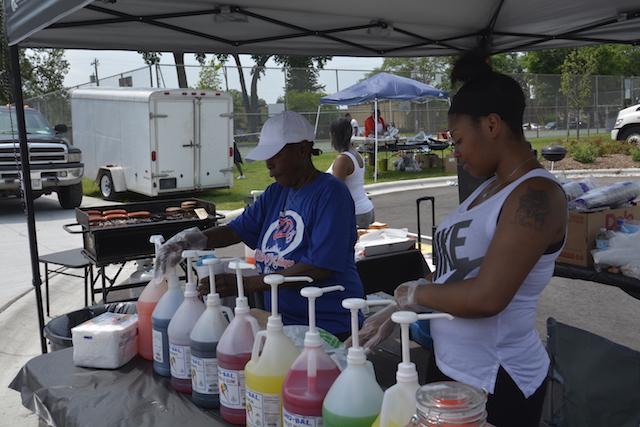 Most younger folks, like 15-year-old Lamontae Vurrell, look forward to the home-style BBQ and food. Vurrell has been celebrating Juneteenth for five years and was marching in support of Sheila Stubbs, a county board supervisor running for state assembly. He was one of a handful of kids greeting bystanders at the parade and giving out candy and pamphlets in support of Stubbs’s campaign.

“I know she can do it and I see her as a leader. In our church she supports people so I came out here to support her,” Vurrell said. 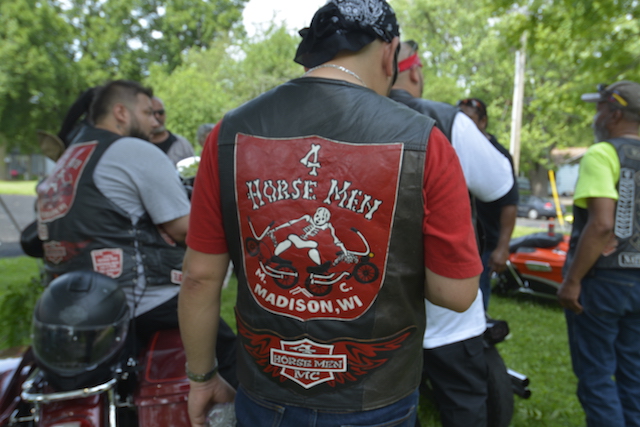 Central to the Juneteenth celebration beside community and the family atmosphere is diversity in culture. 41-year-old musician and dancer Edi Gbordzi moved to Wisconsin in 2001 from Ghana initially to teach traditional forms of African and Ghanian dance for UW-Madison’s Dance Department and was invited to perform African styles of music on the drum and percussion drums at the parade. This year was his fifth time participating in the Juneteenth parade.

Gbordzi sees Juneteenth as a way to bring the community together to share one common goal of diversity and culture. While playing African music during the procession, he wears a “fugu,” or a cultural clothing from the northern part of Ghana, to represent his Ghanian roots.

“I wear this to represent when I’m playing and to show people what we do back in Ghana – this how we dress, this how we play this type of music, and this the clothing that goes with it,” Gbordzi said. “So that’s why I’m wearing it so I can be very significant so I can show the people, it’s a diversity thing, really what I can share.”

For many parents, the Juneteenth parade and festivities are a way to reconnect their children to their historical roots and teach them about how to navigate racism. City of Madison Metro Bus Driver of 21 years, veteran and father of two, Elvis Green participated in the parade representing the Unknown Riders bike club. Green said amid rising national racial tensions, Juneteenth is crucial in showing the youth “it’s not always been this way.” 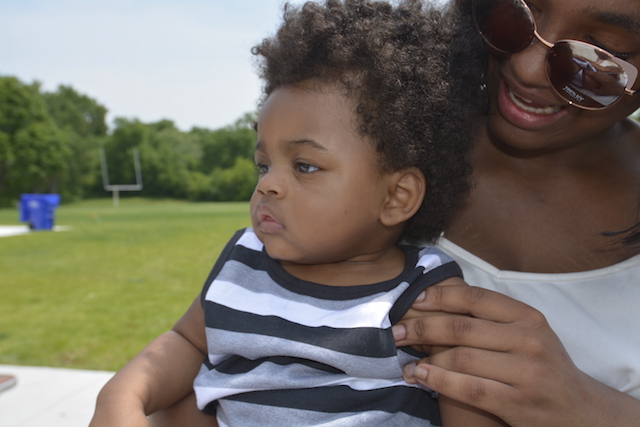 Sharing the Juneteenth celebration with the next generation

“Once this event comes around, they can see that you got people from every different race coming together nobody’s arguing, nobody’s accusing anybody, nobody’s calling people racial slurs,” Green said. “That’s why I really want them to know that the celebration is about ending slavery and racism – it’s not a good word, but it’s real. And racists live. And with the way things are now, I guess you can say racists are more blatantly coming out and I just want them to know that you can’t judge everybody off the actions of one.”

Peter Haney and Leila Pine, members of the James Reeb Unitarian Universalist Congregation (JRUUC) in the East Side of Madison, marched in the parade with a banner that read “Black Lives Matter.” JRUUC is known for its “depth-of-heart” and participates in many social justice issues, including voting almost unanimously last November to be a sanctuary for immigrants contesting their deportation orders.

They believe their white allies should be aware of what Juneteenth means to African Americans and its historical roots as well as being in solidarity with them. 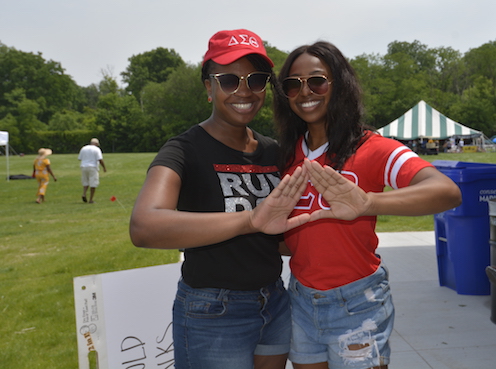 Enjoying time with friends at the Juneteenth Celebration

“One of [our principles] them is the inherent worth and dignity of every person, looking for a world governed by the people and peace and justice,” Haney said. “I would advise people to follow their consciences and do what they can and to be open to their neighbors.”

Hunt hopes Juneteenth means unity to the Madison community. She believes it’s important to show black resilience and to know and understand the history of black people and Juneteenth.

Moving forward, her and other organizers will be planning the next Juneteenth, taking into account what did and didn’t work to make sure next years Juneteenth brings a familiar sentiment of strength, family and unity for the black community.

Enjoying food with friends at the Juneteenth Celebration