One of the pleasant features of public transit is that it can provide riders a sense of community even as each passenger may be going to a different destination for a different reason. Some talk while others acknowledge another’s presence with a nod, eye contact or some other form of nonverbal communication. 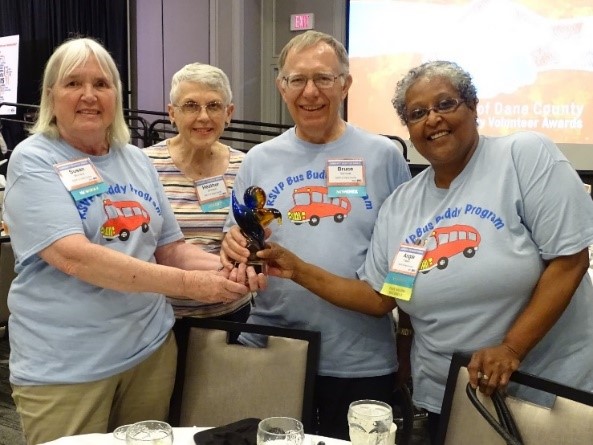 “This bus is bound for Community. It’s around the next bend. Hop onboard. Return your driver’s greeting. Extend your smile across the aisle. Let’s move it. We’re all in.”

Another poem by Kathryn Lederhause centers on the shared space of public transit.

The words of Lederhause and Young capture the essence of the public-ness of transit; how we come to recognize and attend to each others' 'voice,' spoken or not, in shared space. Passengers may discuss a favorite hobby or the latest news. They may commiserate about the weather or speak excitedly about a recent or upcoming event. Or they may just try to rest quietly, perhaps listening to a podcast with earphones and an Ipod or smartphone.

It is thus sobering indeed that many senior citizens, people with disabilities, and newcomers may suffer from a sense of isolation that can lead to serious health impairments, physical and/or mental. They could use public transit to get out and see the city. However, they may find public transit too unfamiliar, too intimidating.

But what if there were a bus buddy who would take the trip with them until they felt comfortable enough to do it on their own? This is the thinking behind the Retired and Senior Volunteer of Dane County’s Bus Buddy program, or RSVP for short, and its volunteer coordinators.

As Jan Karst and Diana Jost, who oversee the program, write that “the volunteer Coordinators meet with new passengers, teach riders about the bus system, routes, the bus stops nearest them, scheduling, transfers, accessibility (ramps, kneeling bus), and seating. They accompany the passengers on the first one or two trips and continue to accompany them until they are comfortable to ride on their own. The coordinators provide them with the training and confidence they need to be able to use this low-cost transportation.”

In addition to one-on-one activity, there are free Bus Buddy Tours meant to combine learning and public transit for a fun outing between new and old friends. Bus Buddy volunteers lead group tours that include instructions on how to use the bus, a visit to a local attraction and a complimentary lunch or snack, which is sponsored by Dane County Human Services and the American Automobile Association.

Now in its fourth year, there were five trips during the Spring and Summer of 2018: 1) Olbrich Gardens (April 25); 2) Madison Children's Museum (May 17); 3) Wisconsin History Museum (June 19); 4) Vitense Golfland (July 18); and 5) Chazen Museum of Art (August 16). The number of participants on each outing expands every year, and the number of outings in 2019 will likely grow from five to seven.

The Bus Buddy is a simple and basic idea that reduces social isolation and increases bus ridership. Thus, it is surprising that RSVP’s effort appears to be unique. The program that comes closest to it elsewhere in Wisconsin, is Shoreline Metro that connects Sheboygan, Sheboygan Falls and Kohler. However, Shoreline's program is run by the transit agency itself rather than by volunteers.

Besides Shoreline's program there are two others, Travel Trainers and Mobility Managers, which are employed by various agencies, but not Madison Metro Transit. Hence the need for RSVP to step in.