They call themselves Las Hormigas Bordadoras, or the Embroidering Ants, for their town, San Francisco Tanivet in the Mexican state of Oaxaca, which their ancestors called “the town of the ants.” 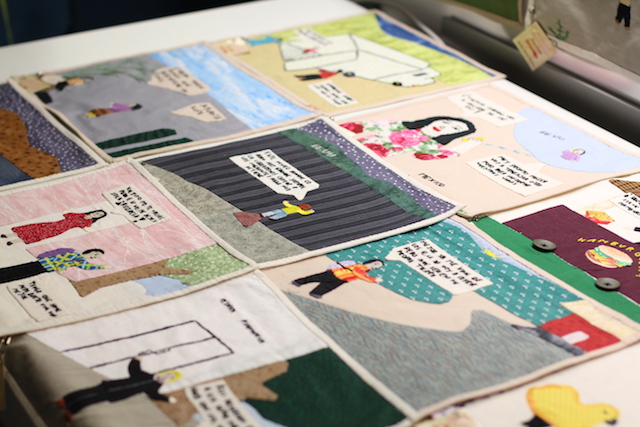 They work with materials beloved in the U.S. — quilting and embroidery — but their “story cloths,” layered with patterned fabric and stitched words, tell stories that many Americans never hear: stories of the dangers and heartbreak of migration. And for the last week, two of these five artists have been in Madison sharing their work.

At a reception in October at Central Library, visitors pored over the framed cloth scenes, which have been on display since August, and hundreds of quilted squares covering the tables. Many portrayed just one or two small human figures separated by a vast desert, border wall or the impassable distance between migrants and their homes. Border crossing and the necessity of migration are heavy topics for the Hormigas.

“There’s no water or food on the way, and some die,” explained Juana, the head of the group, who only gave her first name out of concern for her family’s safety. 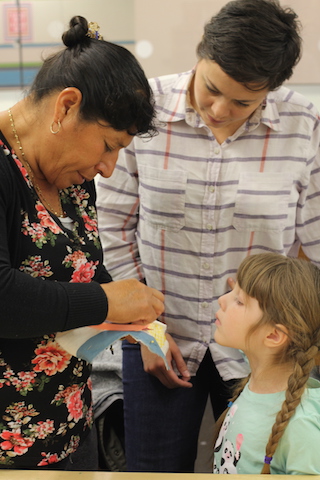 Those who make it to the U.S. may spend years connecting with their families only by phone. Juana says the lack of resources and work in their hometowns pushes people to migrate “just to earn a little money to sustain the family or to make a little house.”

Oaxaca is famous for its embroidery traditions, but the Hormigas’ combination of quilting, embroidery, and social commentary is one of a kind, Carolyn Kallenborn said, the Associate Professor of Design Studies at UW-Madison who helped organize the artists’ visit.

The details in the story cloths, said Kallenborn, make the viewer want to stick around to understand the stories, and those who didn’t know Spanish asked others to explain the narratives.

But the Hormigas’ other work, like the colorful hot pads depicting birds, corn, hot chocolate or mezcal, required no translation. Kallenborn said that talking to the artists over the last few days helped her understand how those cheerful images fit with the somber story cloths.

“They have these really rough things that happen, but they’re not defined by them and it’s not the only thing that happens to them,” she explained. The daily joys are no less real than the painful realities. “That’s all part of life. You see that a lot in Mexico: this duality of accepting the beautiful and the hard.” 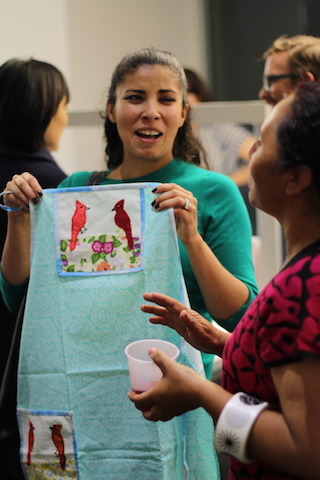 Chef Leslie Abild (left) tries out an apron and laughs with Las Hormigas Bordadoras artist Leonila at “The Other Side of the Border” opening event at Madison Central Library in October 2018.

Visitors spoke enthusiastically with the artists, asking about their processes and inspirations. It was the same interest the artists saw when they visited university sewing classes earlier in the week.

“It’s great that the people received us with such love,” artist Leonila said. “It might seem like nothing, but we came from very far away and we thought, ‘Well, we’ll see how they respond.’”

The Hormigas’ art has not made them rich, but they do not seem to mind. Juana, whose husband passed away two years ago, supplements her art earnings by cutting alfalfa, hay and wood. She said she enjoys the country life, and the greatest benefits have not been monetary.

Leonila says the work has given her a role outside the home and an opportunity to travel.

“It’s given us value as women. I like that my children can learn from me and that they feel proud of me and my work,” Leonila said. 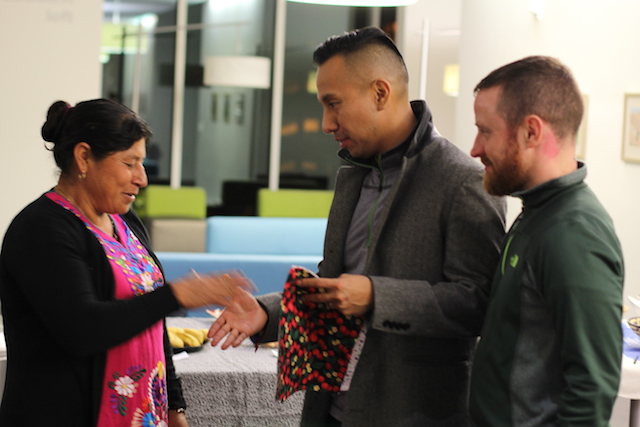 Marco Torrez (center) and Philip Renner (right) meet artist Juana (left) during “The Other Side of the Border” opening event in October 2018 at Madison Central Library.

And through their art, the Hormigas have received visas to travel to the U.S., allowing them, for the first time in years, to see their children who had migrated. Before the visas, they did not know when they would see their children again.

Six years into her artistic endeavor, Juana was able to see her son after nearly a decade apart.

“I was able to hug him and touch him. It was very nice, and very difficult at the same time,” Juana said. “It was what all mothers want: to be where their children are.”

Embroider Your Own Story

The next day, at a workshop in the Bubbler Room at Madison Central Library, the artists helped participants create story cloths of their own.

Leslie Abild, a young chef who left Mexico City for a job in Beloit, began a series of cloth squares depicting what she misses most about her city, while Hormiga Juana helped a white-haired quilter named Gail Jacob prepare for the sewing stage. The two didn’t share a common language, but the common sentiment was clear.

“I also have an immigrant story,” explained Jacob, as she sewed the edge of a boat-shaped piece of fabric.

Born in a displaced persons’ camp to parents liberated from concentration camps, she came to the U.S. as a refugee in 1950, sponsored by a Jewish community. After arriving in Boston on a cattle boat, she and her parents took a train to Wisconsin and arrived at their final destination: Sheboygan, Wis.

“Before and during the war, there were a lot of Jews who tried to come and were turned back,” recounted Jacob. “So it spoke to me, this little workshop on telling your story.”