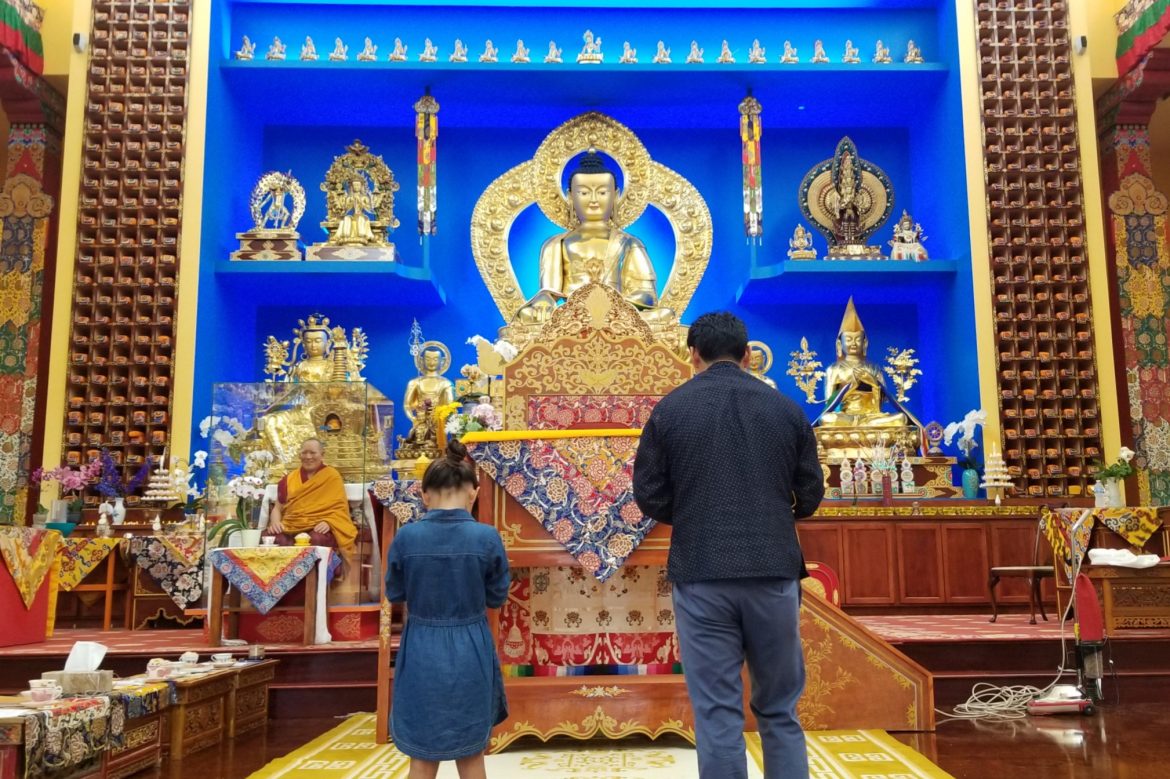 Tenzin Jamyang, right, and his daughter pray in a ceremony during the Midwest Picnic. Photo by Tenzin Woser.

In a union of sports, prayer, community and culture, the Tibetan communities of Wisconsin, Illinois and Minnesota gathered in Madison to celebrate the Dalai Lama’s 84th birthday in a three-day event earlier this month.

The Wisconsin Tibetan Association, in collaboration with Deer Park Monastery, hosted a variety of events for the annual Midwest Picnic gathering, which ran from July 5 through 7.

This year, for the first time, the high monk Kyabje Yongzin Ling Rinpoche visited the city hosting the event to give Tibetan Buddhist teachings as well as support the community in the Midwest. 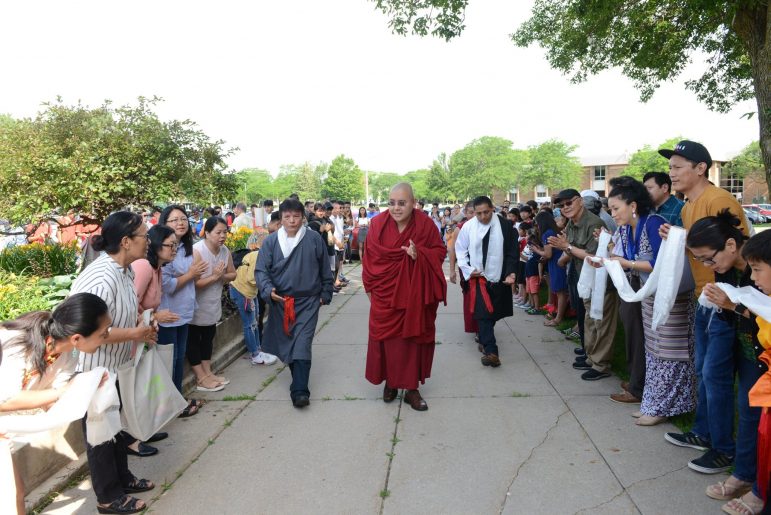 “We show respect to [the Dalai Lama] when we are showing respect to the Tibetan community, so this is also supporting your own community,” Ling Rinpoche said. “Every event has its own meaning. Sports, dance, prayers, potluck lunch, this, that. I rejoice at that.”

Ling Rinpoche began the event with a speech early Friday morning at James Madison Memorial High School following the Tibetan and American national anthems. After thanking the Madison people for hosting him and highlighting the importance of preserving the Tibetan culture through unity, soccer and basketball matches began between teams from the three states.

“Midwest (Picnic) is a perfect time for people to get together and have fun. Also, all of my friends play basketball and they’re passionate about it, so we all go to support them too,” said Tenzin Nyima, a visiting Tibetan student from Minnesota.

Each state’s teams, made up of parents, teachers and students, vigorously competed against their opponent states in the oppressive heat.

Supporters for each team were cheering under whatever shade they could find as they enjoyed traditional Tibetan food such as sha-paleh (fried meat-stuffed dumplings) and la-ping (spicy cold mung bean noodles).

The matches for the day ended at 4 p.m. and would continue for the next two days from noon to dusk each day of the celebration.

The evening of the first day was illuminated by a cultural show, which showcased traditional Tibetan garb and instruments with song and dance. 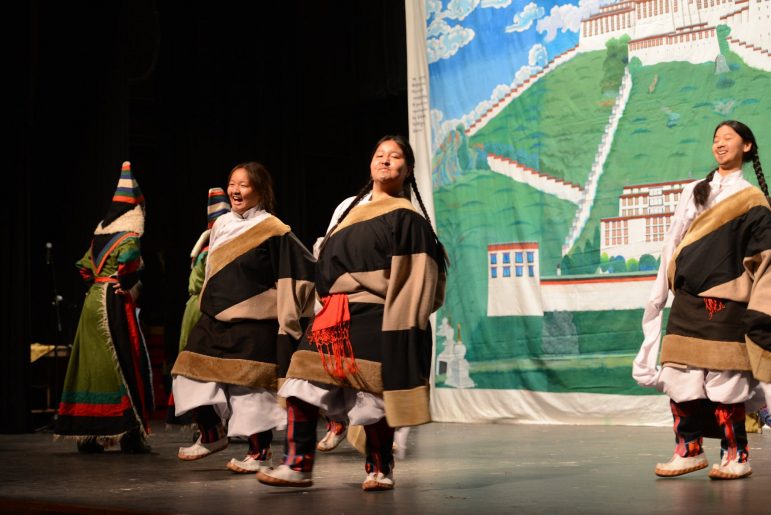 Beneath an immense tapestry of the Potala palace and in front of an altar bearing an image of the smiling face of the Dalai Lama, members of the Tibetan Language Schools from Madison, Chicago and Minnesota took to the stage.

The performers ranged from the age of 5 to 18. For some of the younger students, it was their first time performing for such a large crowd. Many of the older students have been performing for their parents and other audiences for years.

Parents from the community view the culture shows as an integral part of their childrens’ education.

“That’s the number one focus … to preserve our culture. That’s what all of our children are practicing every weekend,” said Tenzin Lhagyal Langchung, a parent, organizer and attendee of the event for the past 17 years.

Langchung said months of preparation go into perfecting each of the states’ cultural dances every year.

The night drew to a close with a speech by Ling Rinpoche and four recent high school graduates being awarded $800 in scholarships from the Tibetan community.

“The coming together of Tibetans from Chicago and Minnesota, it’s just nice to see everybody coming together putting their differences aside,” said scholarship winner and co-president of the Tibetan Youth Association Kunsel Lhamo. “We’re all celebrating one thing which is His Holiness’ birthday.”

All attendees filed into the immense room and sat on the tight patchwork of saffron-colored cushions chanting along with the monks sitting in the front of the room.

“I think it’s a really cool thing to have in Madison,” said Deer Park Monastery’s translator Katrina Brooks. “This kind of Buddhism is not for everybody, obviously, but there are certain things about His Holiness’s message that I think are applicable for everybody. Just appreciating that there are Tibetans carrying on this tradition. It is something that some people will benefit from.”

Bathed in the refracted sunlight from the windows high above, some recited the prayers from books written only in Tibetan and others from books with the phonetics of the Tibetan characters written in English. Nevertheless, all were joined in celebrating the Dalai Lama.

At an intermission in the prayers, Tibetan volunteers from the Madison area passed dresil (Tibetan sweet rice) and peuh-chah (Tibetan salty tea) or sweet tea to everyone in the audience, as is customary during significant religious gatherings. 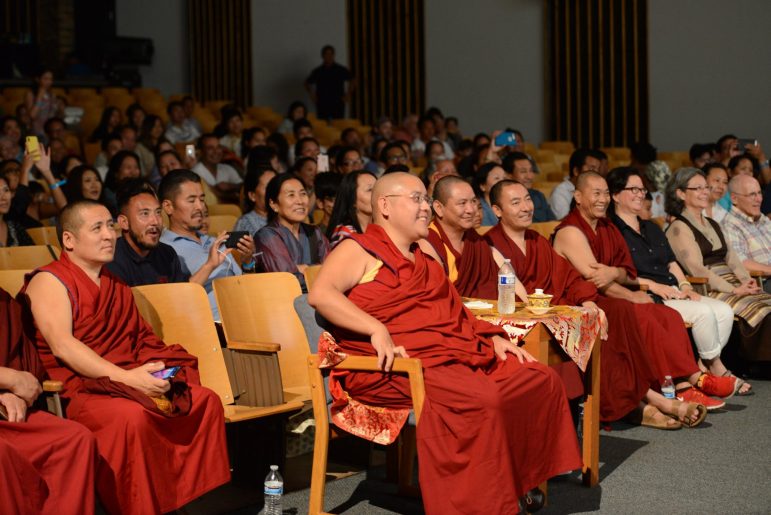 “Even though I’m not very religious … seeing him makes us happy because he has so much recognition around the world. Especially in the Tibetan organization … It was truly a blessing,” said Tenzin Jamyang, Tibetan father of four and attendee of the Picnic for more than 20 years.

As the prayers finished, all stood and bowed for the Ling Rinpoche as he left the room, after which everyone lined up to receive blessings and make offerings at the front of the temple room where a picture of the Dalai Lama was mounted atop a throne. The line stretched well out of the temple doors with many holding khathas (blessed scarves often used to give thanks) to offer upon the altar.

Once everyone had their chance to give their offering and receive a blessing from a monk, they left the temple and formed a circle around the Monastery’s stupa to perform an incense offering called ‘Sang-sol’.

Then the potluck began, as all attendees helped themselves to free traditional Tibetan and Indian cuisine. Some went to attend the basketball and soccer matches that were beginning at the time. Many chose to stay at the temple and enjoy gor-sheh (Tibetan circle dancing) popular among adults and children during celebratory events.

With the evening of the second day drawing near, it was time for the night’s entertainment, a concert hosted by the Wisconsin Tibetan Association featuring two famous Tibetan singers and a youth dance competition organized by the Tibetan Youth Association.

In front of the stage sat an audience visibly larger than the previous night’s. Many were surprised to see Ling Rinpoche waiting for the show to begin sitting in the very front as typically, monks do not participate in lay peoples’ events.

Yeshi Khando took control of the crowd with her charisma often leading the crowd in the well-known lyrics of her songs and recruiting sides of the crowd to battle against each other to see who could sing the loudest.

“The amazing main thing about contemporary Tibetan music and performances is gathering people from different age groups,” said Khando. “If you look at very traditional performances, although it is very important to preserve our culture, you will notice that most of the people in the audience are above thirties or above twenties. The younger generation tends to avoid these performances. When it comes to contemporary music … it connects people from the youngest, maybe even toddlers, to the oldest people.”

Between the performances of each singer, the youth dance groups faced off. The dance teams representing Minnesota and Madison’s Tibetan youth all gave performances to a mix of Tibetan Pop, Indian Bollywood, English hip-hop, and even Korean-pop music. From the time they got onto the stage to the time they left, the audience cheered for the songs and people they knew.

This is Madison’s first year hosting a Youth Dance competition for the annual concert during the Midwest Picnic. The Tibetan Youth Association were the organizers, a group run solely by high school and college-aged Tibetans.

Nearing the end of the night, the competition’s winning teams were each awarded $150. The Madison youth’s younger group won their bracket while the Minnesota youth’s older group won the other.

After the prize winners left the stage, it was time for Yeshi Khando’s final song.

Over the course of the show, Yeshi Khando had persisted in getting the audience to dance with her in their seats or on stage. Only a few joined, though, which Khando later attributed to shyness in Ling Rinpoche’s presence.

However, closing the concert Khando sang the Tibetan-party-favorite, “Aap Jaisa Koi Meri Zindagi”. Within a few moments, almost everyone in the audience was either dancing to the beat in their seats or on their way to the stage. Tibetans, young and old, swung to the funky-Indian-classic while the smiling image of the Dalai Lama stood watch from its place atop the stage’s altar.

As the song came to a close, everyone who wasn’t already standing stood with the crowd to give a standing ovation, and some of the children on stage bowed with Khando in appreciation.

The night’s master of ceremonies led the audience in chanting “Bhod-Gyalo!” (Free Tibet!) three times before everyone bowed Ling Rinpoche out of the room and began to head home themselves.

Sunday morning began with a long life empowerment teaching given by Ling Rinpoche.

Deer Park Monastery’s temple was once again filled with Tibetan-Buddhist practitioners now all looking up to the Rinpoche’s instead of the Dalai Lama as he led in prayer from the Tibetan text.

After the prayer ceremony, the rest of the day was reserved for the basketball and soccer finals.

The basketball final came first with the Minnesota PlayMakers coming in first over six other teams and winning a trophy along with $1,200 in prize money.

Next came the soccer tournament. The bleachers of Breese Stevens Field were speckled with Tibetan flags as the teams dueled for a $1,500 prize pool. Ling Rinpoche was present for all of the matches and watched from above the field in a VIP area. 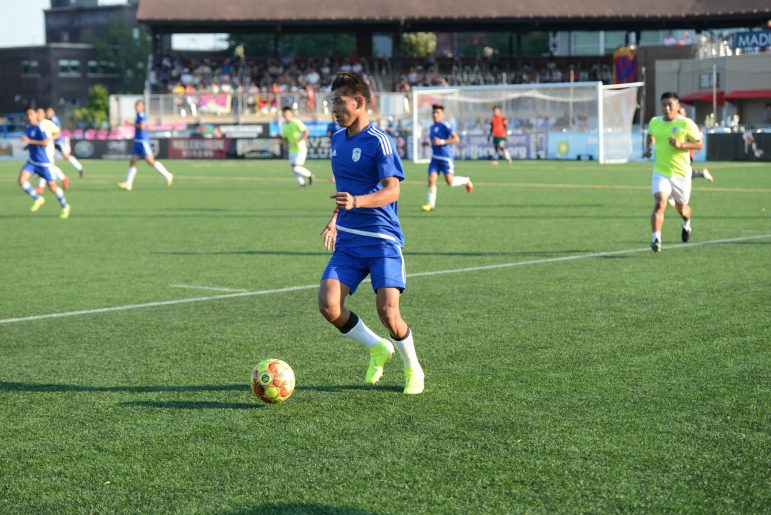 “[Ling Rinpoche] spent time with the ordinary Tibetan people the whole three days.” said Jamyang. “Usually I don’t see high lamas spend so much time with the people, that was so valuable and we are so fortunate to have that time to spend with him.”

The final match was against two of Madison’s teams, the Dokpos (Friends) versus the Yaks, with the ‘Dokpos’ eventually winning decisively.

Ling Rinpoche handed the trophies to the winner of the tournament after which the remaining visiting Tibetans paid their respects to the lama and started their drives home.

The celebration first began in memory of a Tibetan layman immolated in protest against the Chinese occupation of his homeland in 1998, according to Langchung.