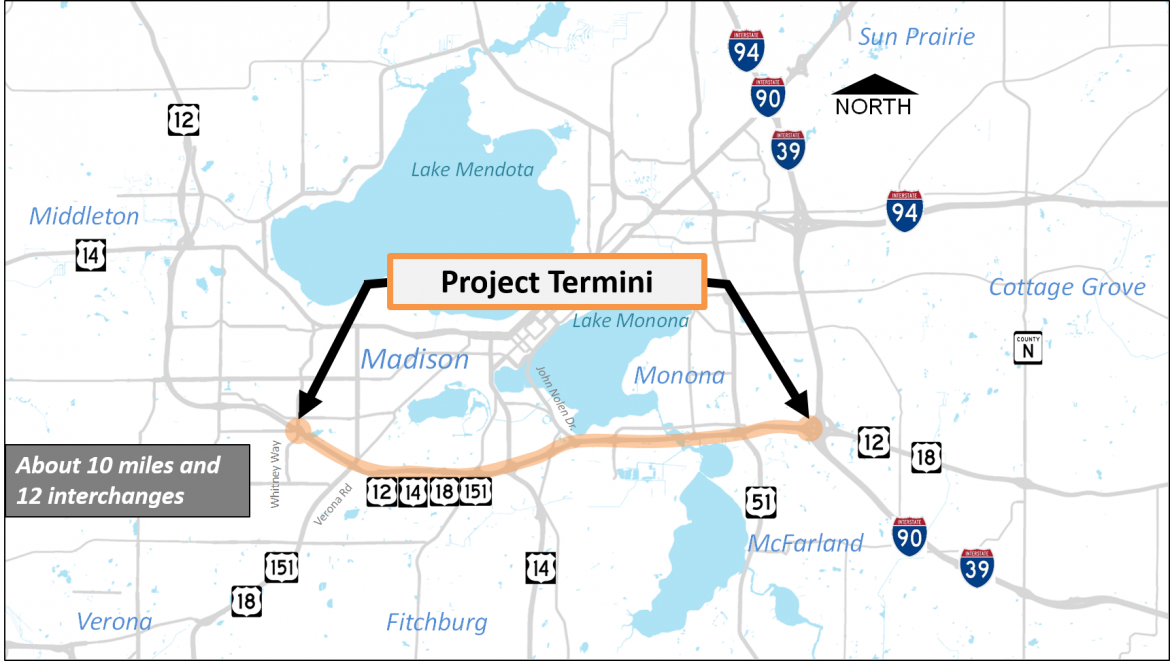 A counterintuitive way to reduce congestion is to go on a road diet or, in this case belt-tightening. The common view? No.

On July 24, 2019 officials involved in a Wisconsin Department of Transportation project called US 12/18 Madison Beltline Improvement Alternatives held a well-publicized public involvement meeting1 on a ten mile stretch between Whitney Way and I- 39/90 . The stretch had to be upgraded, the perfect time to consider modifications to the current arrangement. Unfortunately, the two alternatives were limited to: 1) Resurfacing the median area with drainage improvements and replacing deteriorated sections of the existing barrier wall; or 2) Performing the first choice with slight modification to enable the use of the median as an additional traffic lane during peak commute times -- a practice referred to as "dynamic part-time shoulder use" (DPTSU).

Neither alternative seems particularly attractive, while a more academic policy analysis would also include the option of doing nothing (letting deterioration continue). Nor was a fourth option that would involve real improvement entertained, that of restricting some lanes to high-occupancy vehicles (HOVs; vehicles with more than one person) or rapid transit and modifying others for safe bicycle and pedestrian travel. In other words, the option of Belt Tightening was not considered, but it should have been.

Let us hope that this option is seriously considered by the parent of the part-time shoulder project called Madison Beltline Study begun in 2012.2 In general, WisDOT needs to develop more projects focused on improving public transit, bicycling and walking; fewer projects focused on highway expansion. It needs a much more balanced approach to transportation that acknowledges how expensive cars and trucks are to own and operate and makes them as unnecessary as possible.

The short-term benefit of Dynamic Part Time Shoulder Use seems clear. It would initially relieve commute-hour congestion by making an additional lane temporarily available for over-flow traffic. It would do so by reconfiguring existing land rather than using new land, and it could be implemented fairly quickly. Estimates are that it could be operational in less than 18 months.

The main problem is that it is only a short-term solution (maybe lasting 5-10 years) but would spend resources that would no longer be available for a better solution. In the long term, congestion would build back to its current level but would do so using additional space. The number of Vehicle Miles Traveled (VMT) and emissions from that travel also would have increased while drivers would face the same amount of congestion as initially. And to make this a vicious cycle, there would probably be calls then to make full-time what had initially been only part-time, again as a short-sighted solution to congestion.

Such a situation would hardly be compatible with the project's claim of being 'sustainable,' since 'sustainable' is commonly thought to mean that something can be maintained over time at the same rate or level.

The project website claims that DPTSU is being used in 17 states. That use is fairly recent so there is no long-term evaluation of the practice in the United States. But part-time shoulder use had been used in such European countries as the Netherlands and Belgium long enough that evidence has accumulated about its long-tern effect. We now know that many routes started with Dynamic/Flex lane arrangements eventually ended up needing expansion to incorporate additional permanent lanes, often within 5-10 years of the installation of dynamic shoulder lanes.3

Economists call this induced demand, a main element of “supply and demand” theory. The general idea is that there is an unobserved amount of demand for a good called "latent demand." There is also an unobserved potential supply of that good called "latent supply." The actual observed amount of the good or its "price" is where latent supply meets latent demand. If one or another of those latent amounts is changed (in this case supply), that change will produce a new equilibrium point. Consumers are perhaps most aware of this concept when a good they want goes on "sale." The sale is often a way for retailers to reduce inventory by "inducing" extra demand for an in-stock item.

If we apply this logic to the traffic world, then what we call Beltline congestion is the "price" we are willing to pay to use the road. If we deem the price too high, we avoid the congestion by reducing our demand through changed travel habits, changed housing location and/or changed employment. If we grumble but put up with it, then it is not too high. If the “supply” of lane space is increased, the price (intersection of latent demand and latent supply) is lowered, and our behavior influenced accordingly. Until we again experience the level of congestion that we accept overall even if we grumble about it. This is nicely explained in an article that came out last September by Benjamin Schneider of CityLab called Induced Demand”4

An intermediary solution could be to use Dynamic Part Time Shoulder Use, but to restrict that use to mass transit. In some places, for example the suburban Chicago I-90 corridor, "flex lanes" have been designed in such a way that even when closed to regular traffic, they can provide an express lane for mass transit.5  Various forms of shoulder-riding bus arrangements have also been used to great success in the Minneapolis/St. Paul region, and there is now talk of using it for Freeway Flyers transporting people between Ozaukee County and Milwaukee. Discussions of adding a Bus Rapid Transit system (BRT) to the Madison Area sometimes mention shoulder use as well. If that BRT bus sailed on past cars moving slowly in regular traffic lanes, that image alone might sell people on the benefit of having a truly more sustainable regional public transit system.