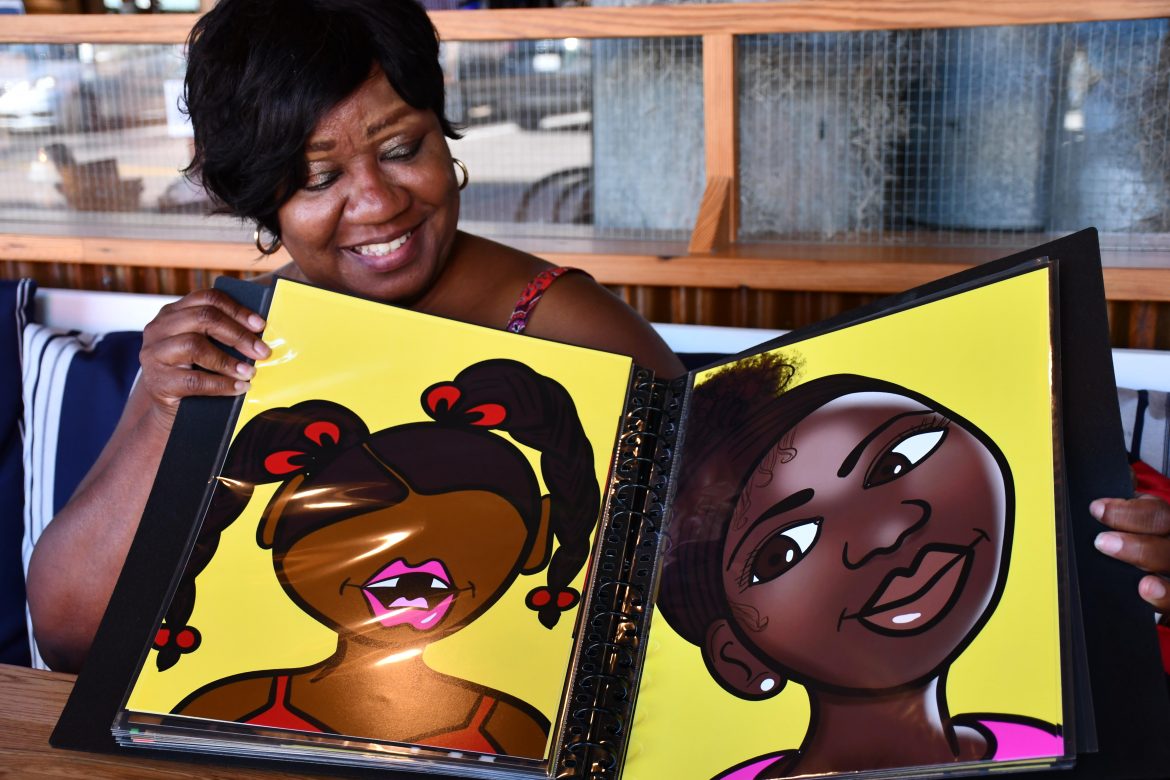 Lilada Gee shows off some of her digital paintings. Photo by Mackenzie Krumme.

Everything in Lilada Gee’s life has been hard. Her childhood was hard, she divorced, raised two kids on her own, and lived through sexual abuse, verbal abuse and posttraumatic stress.

“Everything in my life has been hard,” says Gee. “But these are the only thing that hasn't been hard. Nothing has been hard about it.”

Gee is referring to the digital paintings she’s been creating, paintings that celebrate Black girlhood and womanhood with joyful colors and child-like exuberance.

Gee, founder of Lilada’s Livingroom, an organization to help women and girls deal with the trauma of abuse,  revealed herself as an artist on social media earlier this summer.

“Hey, ya’ll! I’m an Artist!” she wrote. “I create art that tells the stories of Black women and girls. Art that inspires. Art that heals.”

Her digital paintings, which she creates on her Ipad, immediately took off. Since then, she’s been commissioned to do work, shipped art to Alaska and showed at public appearances. She put her artwork on 25 coffee mugs and sold out in less than 12 hours.

Though she’s never opened up publicly about her art until now, the creator in her has been waiting just under the surface since she was a young girl in an abusive home. She use to color mandalas or spend hours in the paint section at the University Bookstore in order to escape. It was her trauma response, she said.

Fast forward to the present. After being a mother and having a 30-year career under her belt, she is grateful for the positive affirmations she’s gotten since announcing herself as an artist. She said her social media followers, family, friends and colleagues are responding to her thoughts, prayers and feelings that she pours into her drawings, she said. But that doesn’t mean she wasn’t scared.

“Coming out with your art at any age is like walking down the street naked. So what is it like when you are an older woman and with grown kids-- it’s like double naked,” she says with a laugh.

"What they’ve given to me"

But her art is more than a side-hustle. Her artistic desires have been waiting to take shape, waiting to manifest until she’s gone through her life experiences.

For the past 30 years, Gee has been building Lilda’s Livingroom, an organization to defend Black girlhood and create healing, safe spaces for sexual abuse survivors. Most recently, she’s been doing intensive trauma work with young elementary school girls and it has been overwhelming, she said.

“So much comes from pain and the last few years has been a painful joy. Just working with these girls is always a joy. I love them. Like they're my own babies. But it's been painful,” Gee says. “When you see kids in pain-- it’s that opening up of myself to be able to receive their pain. I see myself kind of as a conductor to try to siphon it away from them. But I needed something, cause I started breaking. I felt overwhelmed and this helped me. This healed me.”

Gee says in her head she sees images of the women and girls she has worked with. When drawing these girls she is reaffirming their beauty and their importance. By taking the time to draw these images, she says she is telling them, “there is something special about you and your face needs to be remembered.” Gee says this kind of gratitude is healing for her.

And these paintings, Gee’s art, is something these girls have been able to give to her.

“I think it represents my hope for them, for their lives. You try to help somebody and you find the point that they've done something for you, too. I think this is what they've given me and I didn't expect it,” Gee says.

Intention goes into every one of Gee’s pieces.

When she is up in the early morning and laying in bed after dark, she thinks about celebrating Black girlhood, artistically drawing older Black women and spreading the message that Blackness is beyond your neighborhood, it is global.

“We need this stuff. On the regular Black people don't see positive images of themselves,” she says.” These pictures are just bright and colorful -- they aren't sexualized, or violent. They just make you feel good, you know?”

Sometimes she draws a face with no eyes or nose, just big, bold beautiful lips. She said this is to allow Black women the voice they’ve been denied for so long. And to force the viewer to listen to what Black women have to say.

“We were silos over the years. Think about a Black woman that you know-- now imagine that Black woman couldn't speak her mind. Imagine that,” says Gee. “So now we are loud and you gotta listen.”

The lips and mouth, which are the central focus of the painting, are also meant to represent the voice of survivors.

If the subjects do have eyes, they are often closed. This is a sign, Gee said, that the person is at peace.

“Someone who's been abused, like myself, you have posttraumatic stress, you have anxiety, you're scared all the time and you're just kind of watchful. You're looking around, you're always looking around cause you feel on edge all the time,” Gee says. “So if your eyes are closed, then you must feel safe. With your eyes closed; you're not afraid.”

To see more of Gee’s paintings visit @LiladasArt on Instagram.