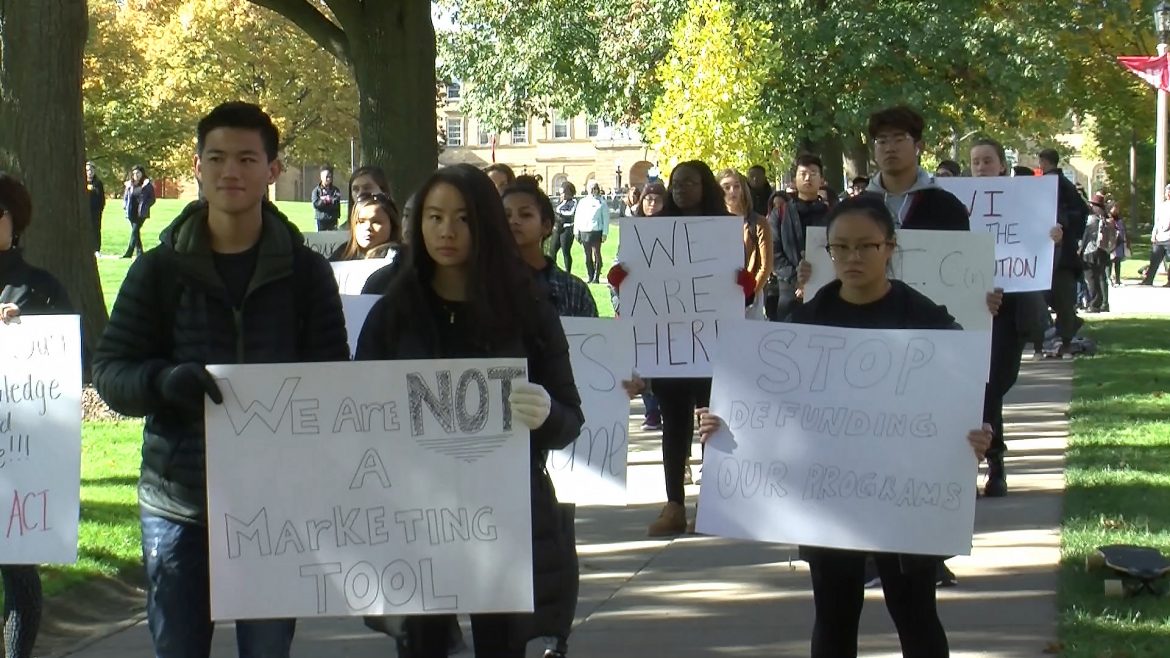 About 200 students of UW-Madison protested on Friday to support the Student of Involvement Coalition (SIC), a new student organization that advocates for equity for marginalized student groups on campus.

SIC was created in the wake of a controversial and now-deleted UW Homecoming video, produced by the student-run Homecoming Committee, which did not include students of color. According to a statement released by SIC on Instagram, the organization is speaking for underrepresented students who were excluded from the UW Homecoming video.

“We are sick of UW. The lack of action this university has taken in regards to its students of color and the marginalized communities has been disrespectful, it’s been abusive, it’s been laissez-faire, like it’s always a back seat,” said Kingsley-Reigne Pissang, one of the student leaders of SIC.

Students wore all black, holding signs listing their five demands – the core of this protest – to call for immediate actions from the university.

At the top of the list is the public recognition of students of color, followed by establishing Multicultural Finance Committee with total budget no less than five million dollars, and distributing $ 50, 000 for each heritage month that oversees by the Multicultural Student Center to build a more inclusive institution.

“We are asking these demands be met within the school year, and things are implemented by next year,” said Nyla Mathis, SIC’s co-chair for accountability. “We want change because we are tired of emails apologizing, we are tired of people talking. We want to see action. We know they have the resources, we know that they can do it.”

The official student government of UW-Madison, Associated Students of Madison, responded in a statement to encourage the rest of the students to echo the lead of SIC and pledged a list of improvements, including a process to reevaluate funding.

“Recognizing this list is not exhaustive we must make ourselves available, listen and take action along with the students we are meant to serve,” the statement said.

Officials also attended the protest, including Dean of Students Christina Olstad, who told students that she wants to help them to meet their demands. Student leaders encouraged the crowd to show up during Olstad’s office hours to discuss any further concerns.