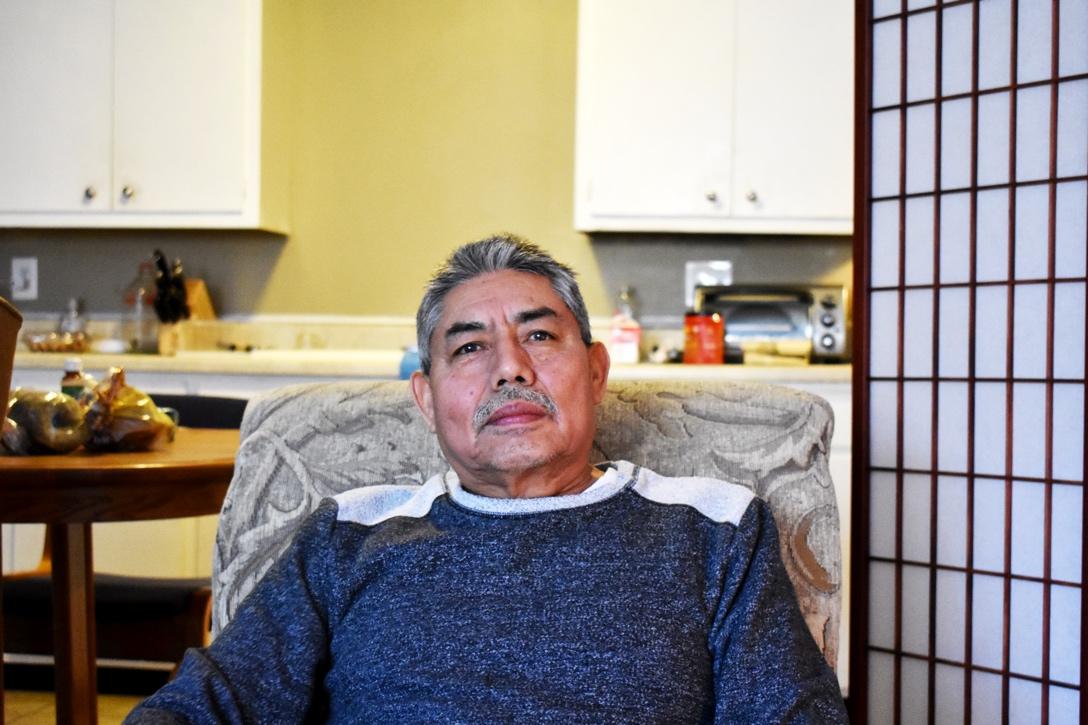 Javier Ayala, an Allied Dunn’s Marsh resident for a year-and-a-half, in his living room. Photo by Shiloah Coley.

Javier Ayala immigrated to the U.S. from a Mexican border town at 14 years old. By the time he was 20, he had picked up street language and slang while traveling as a migrant worker. He was around 30 years old when he finally had the opportunity to formally learn English at Madison Area Technical College.

Ayala lives in the Allied Dunn’s Marsh neighborhood. He understands and witnesses how difficult it is for neighboring Latinx immigrants to overcome the language barrier in the U.S. while tackling multiple jobs to make ends meet.

“Most of these people, this is a working area here. By 6 o’clock, 7 o’clock, beep, beep, beep,” he said, mimicking an alarm clock. “They’re all working in construction. And all this, two jobs, two jobs, and they tell me the same thing. They have a problem with the language.”

The Allied Dunn’s Marsh neighborhood, which straddles the boundary between between the cities of Fitchburg and Madison, consists of a 21.9 percent Latinx population, according to a 2017 study from the La Follette School of Public Affairs.

“People who arrive here, even if they want to learn the language, it’s impossible because it’s going to take a little longer, and they have no time to go to school,” said Ayala.

A report from the Applied Population Lab found the poverty rate among Latinos across the state of Wisconsin is more than twice that of the overall population, according to 2010 U.S. Census data. The median income for Latino households was only 72% of all Wisconsin households.

Some community organizations recognize this and seek bilingual workers to better support the Latinx community. 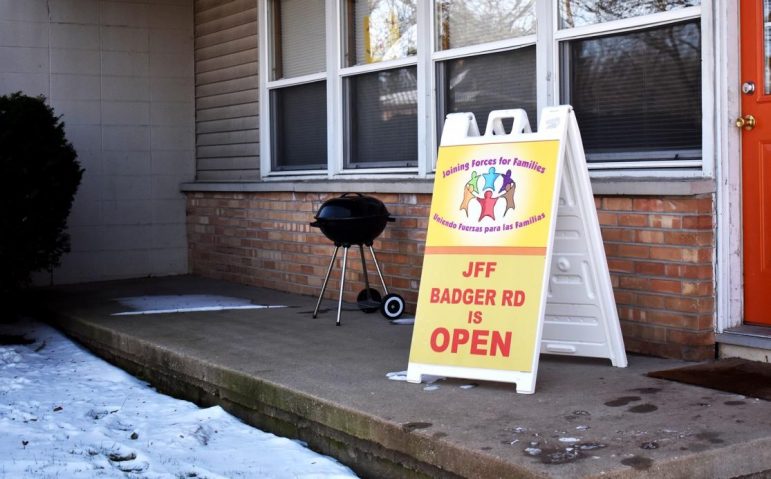 The entrance of Joining Forces for Families at 818 W. Badger Rd. Photo by Shiloah Coley.

Joining Forces for Families (JFF) is a supportive service provided by Dane County Department of Human Services and local nonprofits working to support families’ basic needs. There were only two bilingual social workers when JFF Supervisor Mike Bruce first started working for JFF 17 years ago as a social worker. Today, six of their 14 social workers are bilingual. Bruce proposed an additional Spanish-speaking hire for their 2020 budget.

“There's just no substitution for it. There are plenty of times we just do the best we can and that's okay,” said Bruce. “But if we’re to make a difference, we need someone that speaks the language. If we're to be even better about it, we need to do the best we can to identify, recruit and hire native Spanish speakers as well.”

With the support of Dane County, JFF aids the Latinx community through intentional hiring practices, which allows them to bring on bilingual staff.

However, other organizations struggle to meet the demand for bilingual materials and staff.

Megan Murphy, assistant vice president of operations at Boys and Girls Club of Dane County, recently hired a native Spanish-speaker at the club’s Allied Drive location. But the organization struggles to translate their documents and promotional materials to Spanish because they update their materials so frequently.

“It's an organizational goal,” Murphy said. “Of the things that we definitely need to improve in that would increase our communication and outreach, it would be working to have all of our materials available in Spanish quickly and in a much faster turnaround.”

While attaining more bilingual staff and materials is an important step, Director of Development and Communications at Centro Hispano Nina Gehan noted that more must be done to build trust with the Latinx community, especially undocumented people. 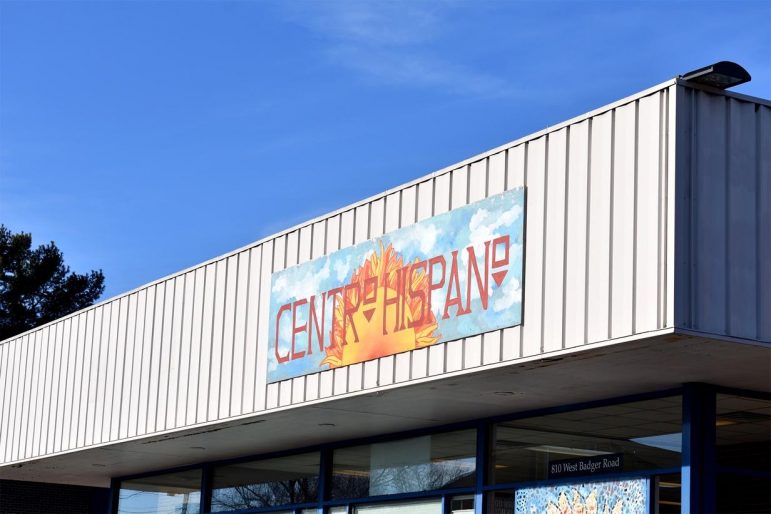 Centro Hispano of Dane County is the leading social service provider of Latinos in the county. Almost all of their services are free with the exception of some higher-level immigration services provided at a sliding scale and subsidized cost. Every staff member is bilingual, and every service offered is in English and Spanish. Gehan describes the space as a bilingual community center.

Feeling safe is a central issue for undocumented communities.

Ayala says most of his neighbors are undocumented, and he can see it in the way they carry themselves.

“When they are illegal they are ashamed to speak out or you know they keep to themselves, keep quiet,” Ayala said. 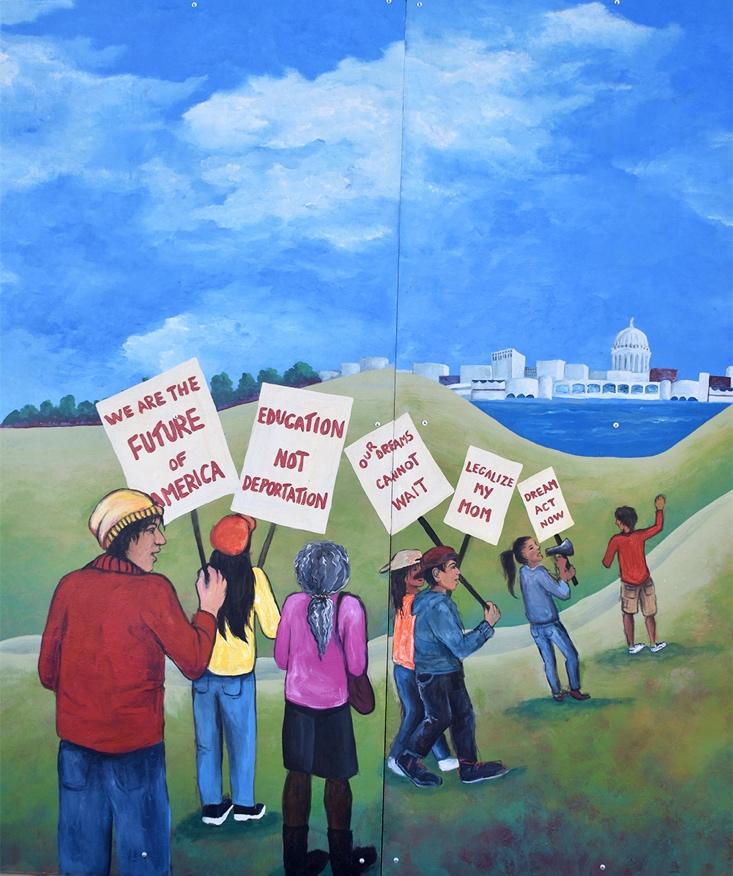 A mural completed by Dane Arts on the wall outside of Centro Hispano. Photo by Shiloah Coley.

One of Gehan’s foremost concerns is the impact this fear has on the youth.

“Even if your own documentation status is in order, that doesn’t mean necessarily that your mother’s is, and you carry that with you,” Gehan said.

“One of the big things our youth struggle with is honestly self-confidence. They don’t feel like they can go out and express their voice, and there’s a lot of shyness and hesitance to kind of open up and to trust,” Gehan said. “I think that’s something we really, really want to work on and figure out because that’s the future.”

Bruce said his Spanish-speaking social workers have one of the toughest jobs.

“The work they do is all of what someone else might do. And then there's stuff in addition, there's sometimes extra needs. There's translation, there’s less services, less resources, especially if you happen to be undocumented,” Bruce said. “That work is substantially different often and more time consuming.”

For non-profits who are struggling to work with the vulnerable population, Gehan said collaboration might be the key.

“All the nonprofits have different things to bring to the table. So how do we collaborate understanding that there may be messengers that are more trusted than others,” said Gehan. Especially at this time, which is honestly a very trying time, where people don't feel as safe as they may have at other times, having the right person in front of you is really important.”

As the city of Madison and Dane County begin to adjust to meet the needs of Spanish-speaking residents, Ayala said Wisconsin is still much better than most other states he’s been to.

“Here, there’s a lot of opportunities, a safe haven for everyone mostly,” Ayala said.