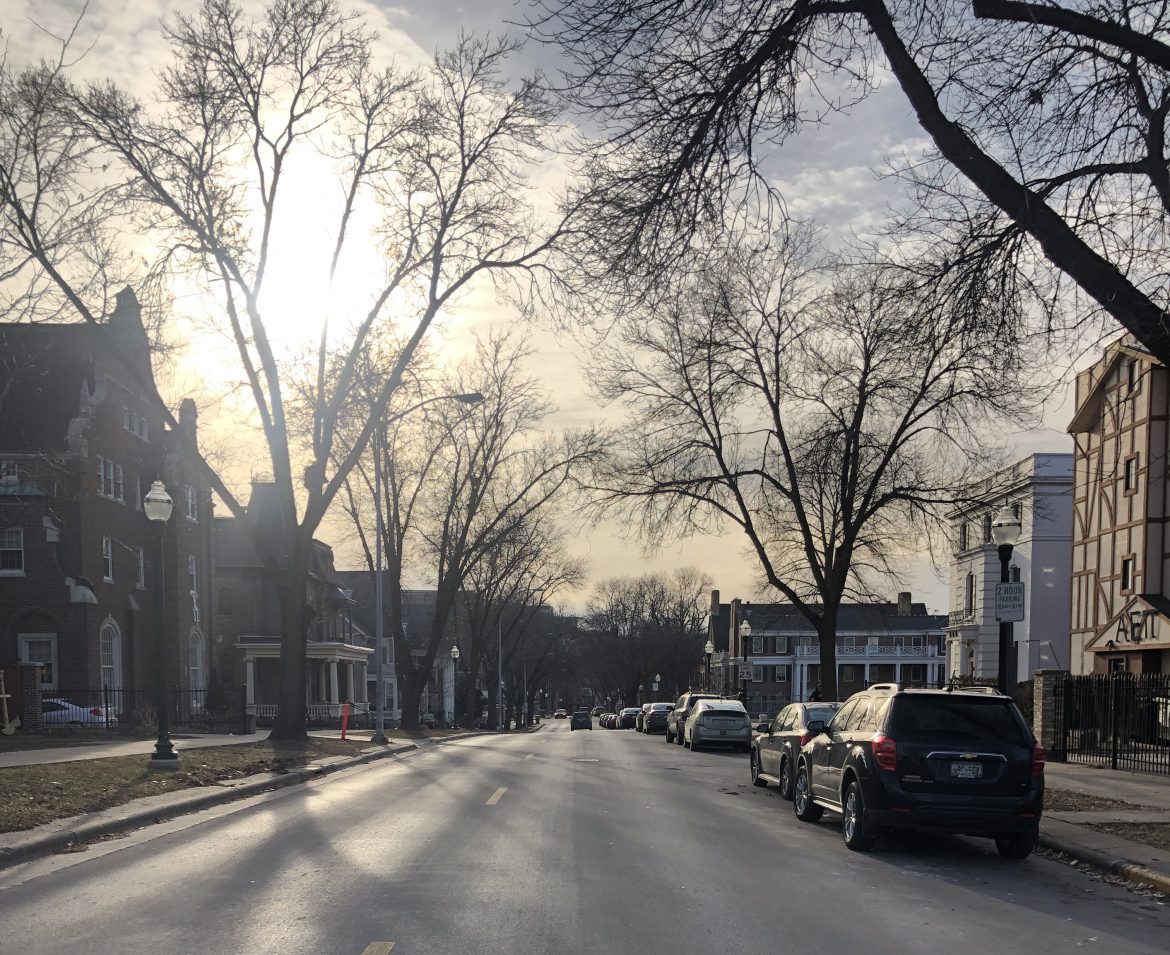 Each Madison neighborhood has its own distinct character, and recent changes occurring on Langdon Street have brought residents anticipation and apprehension that its reputation as a safe, historically rich neighborhood could be threatened.

A proposal for the construction of The Hub II, a seven-story apartment complex complete with a rooftop pool and underground parking, is one point of controversy for many residents of Langdon Street. The Hub II would be the third substantial housing project for developer Core Spaces, after the construction of Hub Madison in 2015 and The James in 2017.

The proposed building would consist of five stories along Langdon Street, with the top two floors rising at the back of the building. The fifth-floor rooftop would include a swimming pool as well as other amenities, and the garage would include 20 underground parking spots.

Madison Alder Patrick Heck, who represents a portion of the Langdon area, said the majority of residents he’s heard from “are concerned about the proposed Hub II building not fitting in character-wise” with the other historic buildings on Langdon Street, many of which have housed fraternities and sororities for decades.

Madelyn Falk, a member of a sorority in the Langdon area, said the new apartment complex would potentially “take away from the natural elegance of the other buildings around [the area]”.

Falk emphasized that living on Langdon Street has been a family tradition, as both her mother and father were members of Greek life at UW-Madison and lived on Langdon Street. Falk said she is concerned that the new housing project “could change the positive, elegant dynamic of Greek life, and the houses that [her] parents appreciated and that we appreciate now.” 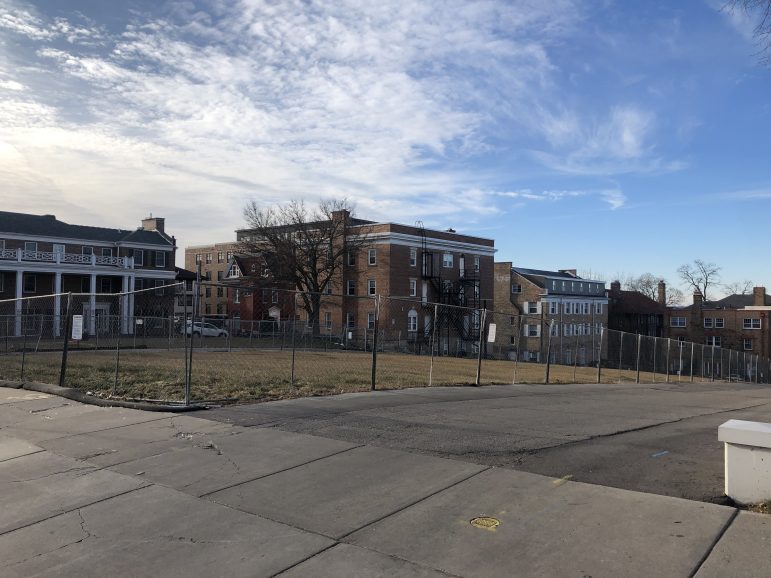 The currently vacant lot where The Hub II is proposed to be built. Photo by Courtney Degen.

This sentiment, however, is not shared by all residents of the neighborhood. Kennedy Devries, a junior who lives in an apartment building on Langdon Street, said she is not concerned about the architecture.

“I don’t care too much how [the neighborhood] looks,” Devries said. “I just care about location and the convenience of where I am."

Heck pointed out that the new apartment building, which is proposed to include 124 units and over 300 beds, “would certainly bring more people to the Langdon Street neighborhood, although some could be coming from already living nearby there.”

Devries said The Hub II would likely bring in “people whose parents can pay for that kind of place, so it would be more rich, higher-class people.” This is not very different from the population that is on Langdon Street now, said Devries.

“You’re drawing in the same crowd that lives in sororities and fraternities, because if you can afford to be in a fraternity or sorority, you can probably afford to be living in a Hub kind of development,” Devries said.

Though the majority of Langdon Street is made up of UW-Madison students, getting students involved in neighborhood issues has been difficult, Heck said. The State-Langdon Neighborhood Association has been inactive for “quite a few years,” Heck said. This is likely because “neighborhoods that are predominantly populated by students are a little bit harder to keep an association going in, [as] students come and go relatively regularly compared to other neighborhoods.”

Heck called an Oct. 21 meeting at the Pyle Center and sent out over 1,000 postcards to addresses on Langdon Street in order to get students interested and involved, but “that wasn’t the catalyst I was hoping for,” Heck said. Only a few graduate students came to the October meeting, though “there’s some talk of trying to get [the association] going again and even potentially incorporating it into this umbrella organization Capitol Neighborhoods, which I think would be fantastic,” Heck said.

In addition, Heck said a Dec. 2 steering committee meeting brought about 25-30 people, including a few housemothers from sororities. According to Heck, “that’s progress, because they will inform the students that they come in contact with through their jobs, and it’ll get people talking at least about this particular proposal.”

Falk suggested that perhaps other topics would get students more interested in the neighborhood association. “Safety is a huge issue on Langdon right now,” Falk said. “So, if [the association] was able to take care of some of those issues, I feel like students would be much more inclined to join and participate.”

Safety is at the forefront as the Langdon community has undergone many changes regarding their relationship with local police in the last few months. The Madison Police Department recently announced it would be removing its Langdon Street officer position in January due to budget cuts. Officer Damien Figueroa, who previously held the position, then resigned nearly two months early in mid-November. As a result, UW-Madison’s Police Department created a position for a downtown liaison officer to serve as an additional resource for the community.

Falk said this series of events has created uncertainty within the neighborhood. “We’re all kind of confused, [and] trying to stay informed as possible,” Falk said. “I guess we’ll see how next semester goes when the transition is complete, but we’re all a little bit on edge.”

Officer Figueroa “brought an amazing presence to Langdon,” Falk said. “He tried to get to know all of the fraternity and sorority chapters, specifically on Langdon. He was really good at keeping up relations with the students on a one-on-one basis. So, I’m really sad to see him go.”

There has also been concern about the shift from the Madison PD to UWPD, Falk said. “The main concerns are keeping our members safe, but also making sure people aren’t getting in trouble or feel less inclined to report things because they’re scared of getting in trouble,” Falk said.  The change in authority has created uncertainty, according to Falk, because “with this new liaison, there’s been confusion if we follow UWPD rules or Madison PD rules.”

Heck pointed out that “because UWPD is trained to have relationships with students,” he suspects the change will be a positive one.

Devries is happy to “have a police officer just dedicated to [Langdon], because it can get kind of crazy downtown especially during the weekends.”

Heck said there has been “some spillover of more criminal elements that have migrated” to the Langdon area from other parts of campus, but “MPD does a great job of trying to deal with those problems.” Unfortunately, due to Madison’s heaving drinking culture, Heck said, “it’s tough for MPD to catch up.”

Falk emphasized that safety has always been a concern for Langdon residents, “but we’ve never really felt truly unsafe or scared for our safety as much as we have this past semester with all these changes coming in.”

Overall, Heck said, he thinks that the Langdon neighborhood is safer than people may think. “I think the people’s perception of safety is different than their reality,” Heck said. “It’s true that there are real problems, and there have been serious incidents that we should all be concerned about. But generally, I feel like Madison and the Langdon Street area are still comparatively safe places to live.”

Despite a multitude of changes, Falk said she still sees the Langdon area’s sense of community as unwavering. “The overall atmosphere and the community of Greek life itself has remained pretty unchanged,” Falk said, “and I think [that’s] a constant positive in the community.”