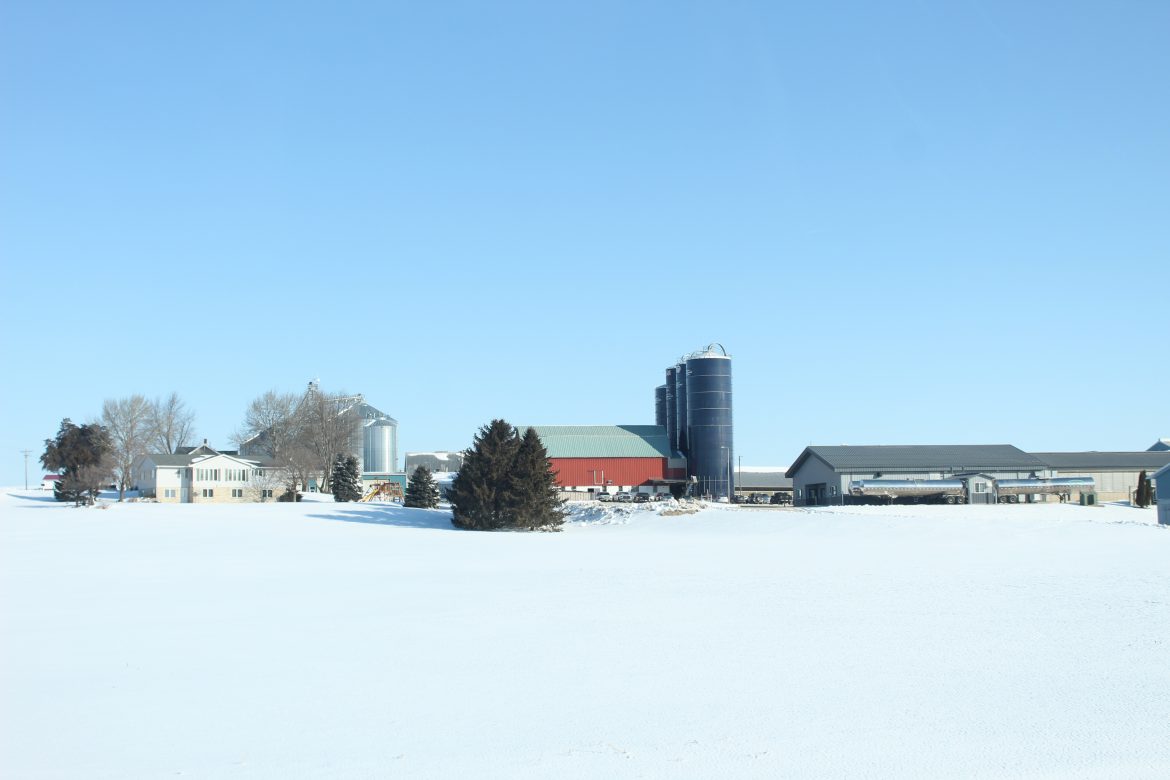 Blue Star Dairy Farm in the Town of Vienna. Photo by Kylie Compe.

An international renewable energy company’s interest in starting a solar energy project in small-town Vienna, just north of Madison, is causing conflicts between neighbors and within families as farmers decide whether to lease their land to the project.

The first mention of the project entering the area occurred in February 2019, and tensions are rising as farmers are taking opposing stances. In January 2020, residents of Vienna put together a petition requesting that the town board hold an informative meeting with Invenergy, the solar company, explaining the Great Dane solar farm project.

Farmers voiced their concerns at a meeting earlier this month about the potential solar energy project taking away prime farmland in a town that has prided itself on agriculture for decades.

“Historically, the town of Vienna has always wanted to stay primarily agricultural,” Vienna Town Clerk Kathy Clark said. “The direction the town has always based its history on is going to be lost to some of this.” 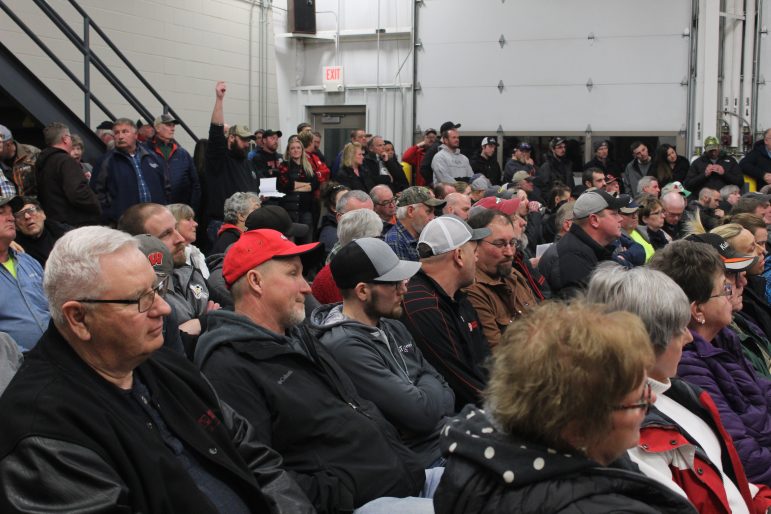 Town of Vienna residents met earlier this month to hear about proposals to build solar farms in the area. Photo by Kylie Compe.

The town of Vienna is made up of multiple types of farmers, but most fit into two categories: dairy and crop. Dairy farmers often rent land from crop farmers so they can spread the manure from their cows on the land, but the solar project is providing steep competition. Vienna farmers are split over the project because it ultimately could hurt the dairy farmers but benefit the crop farmers.

Blue Star Dairy Farms is the largest dairy farm in the area and has been owned and operated by the Meinholz family for generations. Their business relies on leasing land from other farmers to provide feed for their cows and for spreading manure.

“We need the land base to support the dairy,” Sherri Meinholz said. 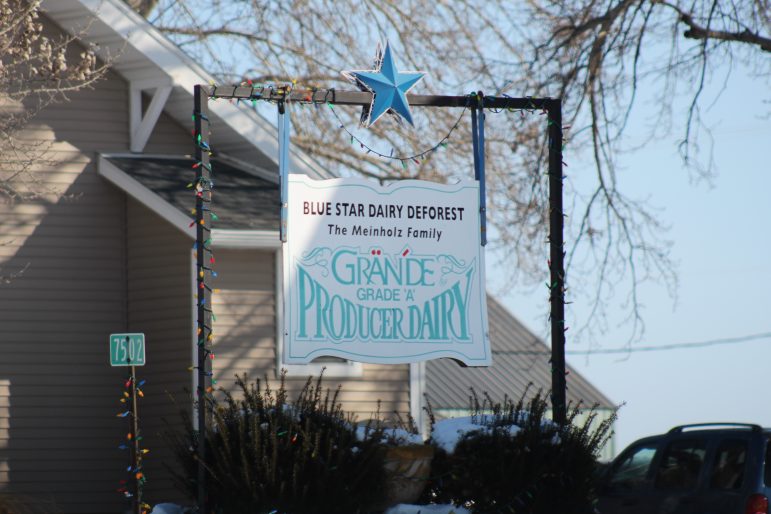 One of the Meinholz’s biggest concerns is having enough farmland to sustain their business for their future generations of farmers, who are eager to carry on the family legacy.

However, not all farmers have someone to pass their farms down to.

Invenergy’s solar energy project offers a practical exit strategy for those who are the last generation of farmers in their family.

“When you commit to a 25-year lease agreement, and you’re getting a fixed income off of that, it’s not a bad position to be in,” Clark said. “I think that’s a positive for some of these landowners that are interested in doing that.”

Invenergy is offering high rates on farmland with a 25-year lease and potential for renewal -- rates three times the rate that Blue Star Dairy Farm currently pays, making it beneficial for crop farmers to sign and harder for dairy farmers to compete.

At the town meeting, Invenergy representative Aidan O’Connor touched on some of the benefits of solar energy in the community, such as the $1.2 million in annual tax benefits that would be divided between the county and the township. This income could potentially go towards new roads or other improvements in the community that have potential to increase property values.

From an agricultural standpoint, the project would help to revitalize land by resting it for a few decades, allowing deep-root species to thrive and building up soil and organic material, eventually reducing stormwater runoff, erosion and helping the watershed.

“Every farmer knows his best soil is in his fence line,” O’Connor said.

At the meeting, some residents voiced concern over eminent domain — the right the government has to repossess private land for public use — and the potential of losing their land to the project. Invenergy representatives explained that the difference between Invenergy and public utilities is that Invenergy is a private company, meaning they have no right to eminent domain. The only way for Invenergy to obtain farmland is if the owner willingly volunteers to sign the lease.

The project is more of a “patchwork quilt” than a continuous mass of land, O’Connor said. Since the project is made up of volunteers, the solar farm would be spread across multiple patches of farmland rather than one large area, dissipating any need for forcibly taking land.

Many residents also inquired as to why Vienna was chosen as the prime location despite the availability of unusable farmland further north. 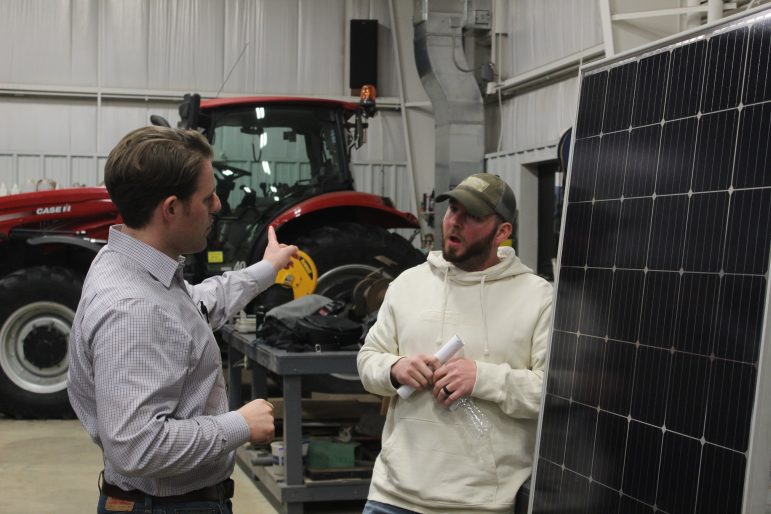 A resident chats with an Invenergy representative at the Town of Vienna meeting earlier this month. Photo by Kylie Compe.

“The town was looked at because we have a large substation, we also have the (American Transmission Company) lines here and we’re close to Madison, where the major utility companies are,” Clark said. “And we have a digester, which would take care of some of the manure issues that some of the farmers are worried about.”

The combination of all these pre-existing resources, as well as the growing demand for energy in southern Wisconsin, made Vienna a preferred location for the solar energy project.

The project is still in the early stages of planning, and an official plan likely won’t be set until next year. Invenergy is adamant about including the public in the process as much as possible in hopes of creating a space in which farmers and solar energy can coexist.

“We look forward to building on that impact here in Wisconsin,” Invenergy representatives said.