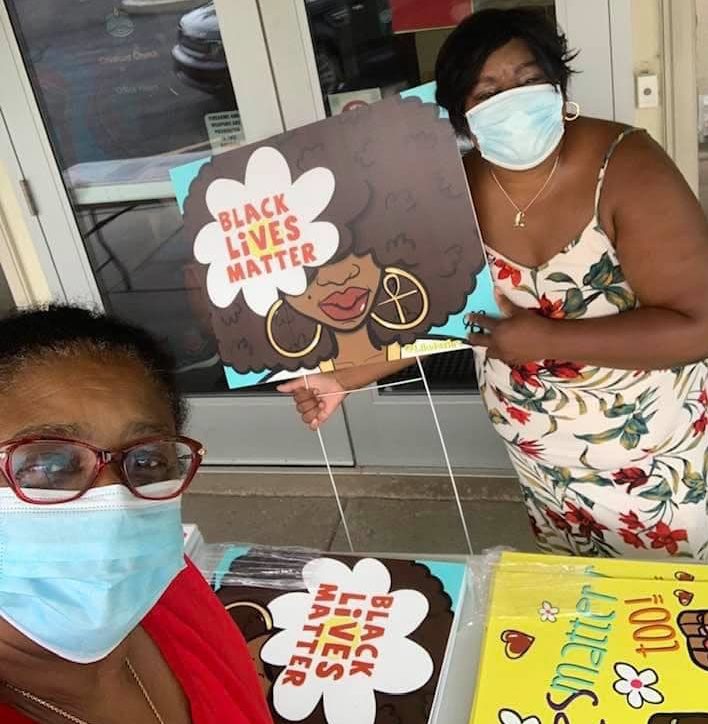 Lilada Gee displays one of her "Defending Black Girlhood" signs

Lilada Gee said she wants the images of young Black girls in lawns across Madison, across Dane County and across the world.

Almost exactly one year after announcing herself as an artist on social media, Gee is creating individual pieces of public art for people to proudly display at their homes. There are two upcoming pickup times from 3-7 p.m. on Thursday, July 23 and Thursday, July 30 at Fountain of Life Covenant Church, 633 West Badger Road. Signs cost $25. A new order of lawn signs

Gee’s signs are different from the traditional signs that are campaigning for a candidate, or representing an organization, or sending a message, she said -- because they have the faces of beautiful Black women. She described one of her favorites.

“One is the Black woman with the afro that really just shows the fullness of her beauty, unapologetically, displaying Black Lives Matter. And the flower in her hair you know -- I love to draw Black women with flowers to underscore that Black women are feminine. We have our femininity, you know, we're not just angry Black women, we have a soft side to us and nurturing side to us.”

Gee said she only considered creating this type of public art after she was commissioned by the City of Madison to paint murals along State Street, where boards blanketed the buildings. In June, Gee and a team of Black women painted two murals -- at 220 and on the 300 block of State Street. The images were of Black women -- some with flowers in their hair, eyes shut or no eyes at all. Gee said watching the way people were impacted by the public art display was powerful and knowing this is the first time in Madison she has seen a mural or piece of public art that represented her, made her want to do more.

“I haven't seen it having grown up in Madison, you know, walking down the streets seeing all of those images of Black people. It did something to me and it touched me. It affirmed me. And I'm hoping we can do that beyond State Street,” she said.

Gee said she believes that by having the faces of Black girls on the signs, it helps draw the person in so they can hear the message with an open heart and mind.

“It is a message. Art has a way of saying the exact same thing that we first reject when we heard it. Art has a way to make us listen differently -- and that's what I’m hoping to do with these signs,” she said.

She compared seeing these signs in the windows of neighbors as a show of support similar to the Helping Hand Safe Home Program of Chicago where people would put a picture of a hand in their window to signal a safe house for children who were lost, hurt or in danger.

“They would tell us that if you were in trouble, this was a house you could go to and know you would be safe,” she said.

Gee said the proceeds of the signs will benefit the Defending Black Girlhood organization, which is currently determining the best ways to serve Black girls as they enter the fall 2020-21 school year virtually.