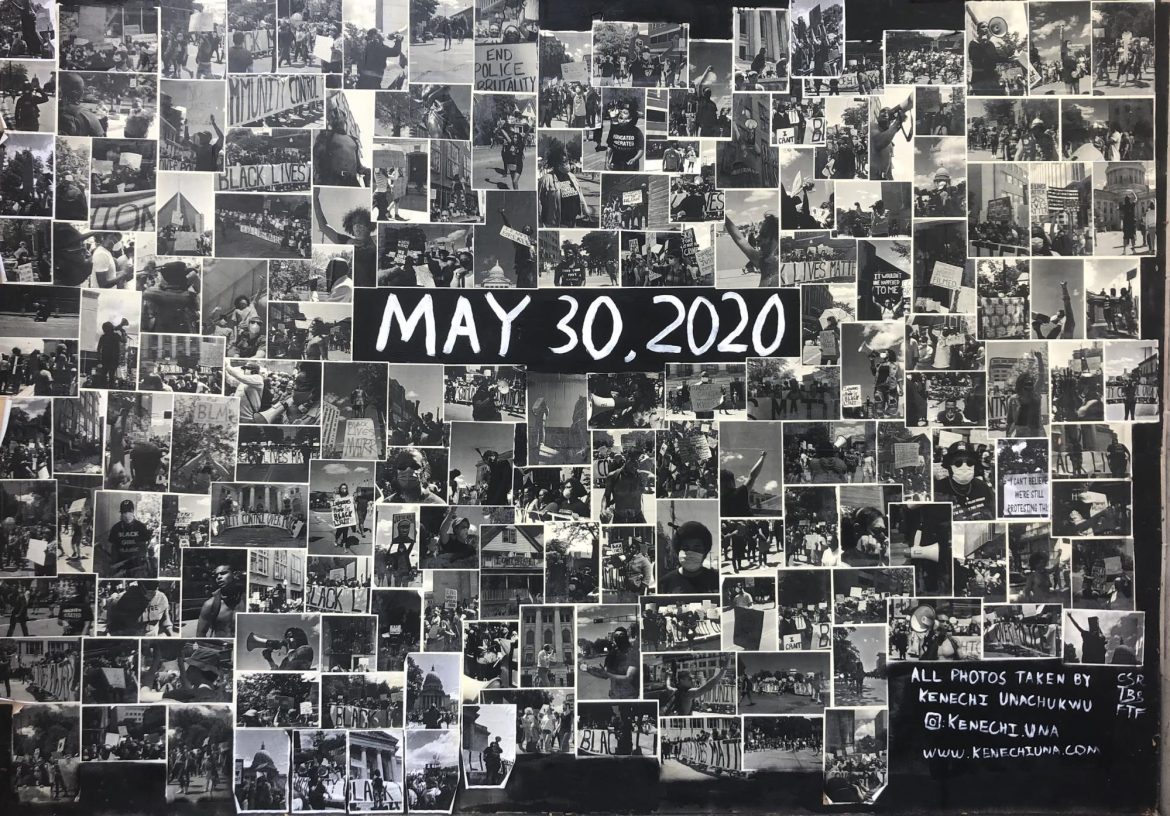 After the Madison Black Lives Matter protests, I made a point to see the murals along State Street. I was deeply moved by these pieces of art. For me, this artwork raised new questions to consider, community issues to understand, and social concerns to contemplate. As a bi-racial, liberal college student who supports the Black Lives Matter Movement, this is not too surprising. However, I became curious about what other sorts of people were taking the time to engage with this artwork, especially in Madison where over 78% of residents are white. How did people with different identities and perspectives understand these pieces of art? Did it shape their opinions or desire for action? Or did they remain unaffected, or even react against it? So I interviewed people with a diversity of viewpoints who had seen the murals downtown, either in person or on an online forum, and asked about their reactions. Here’s what I found:

Many people I spoke to found these murals to be powerful forms of expression and healing. They also valued the art for its potential to educate community members about racism and anti-racism.

“Personally, I have found art downtown to be inspiring. This campus has struggled with race related issues for quite a long time and I am glad to see that there seems to be a new future for us in the wake of George Floyd’s death,” said Joey Levin, an alum of UW-Madison. Plus, art has always served as a strong medium for those to put their experiences into perspective for others.”

At least one person who said he supported the right to protest questioned the legality of these murals. One white man from the Madison Area, who asked to remain anonymous, asked, “My only question is did any of these stores give permission to do this on their buildings...was this like an organized like agreement for the businesses of this community to paint this block like this?” He was not alone in asking about the process by which these murals came into being and did not know that Madison Mayor Satya Rhodes-Conway had enlisted Arts Program Administrator, Karin Wolf, to organize the initiative, nor that the City of Madison had paid many of the artists for their work. 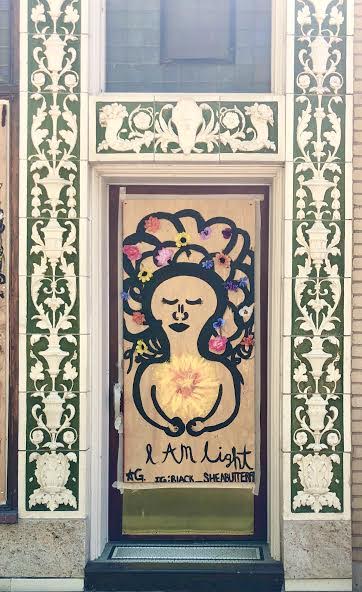 However, the overall reaction I saw, across all of my interviews, was admiration and awe. Many spoke about taking their time while viewing the murals. How important it was to appreciate the thoughtful ways images and quotes worked together to create a persuasive message. They talked about the range of emotions they felt as they witnessed this art -- anger, love, strength, fear, compassion -- and considered what they could learn from it.

Carrie Garlough, a counselor at Cardinal Heights Upper Middle School in Sun Prairie, commented on her favorite mural: “The peaceful facial expression and the words ‘I am light’ caught my attention.  People want to feel peace despite the pervasive feeling of fear and anger in today's America. Everyone wants and deserves to feel safe.”

Casey Harper, an alum of UW-Madison, had this to say about his favorite mural, a piece of art is on the corner of State and North Fairchild that is a collage of black and white photos taken during the protests: “The pictures taken capture moments of intensity and emotion. When put together, it tells the story the way that the artist wants it to be told.”

This art uses the imagery of the actual protests to create unity and understanding for the Black Lives Matter Movement. “There is an interconnectedness of all humanity that I feel is being lost year after year due to increased political polarization and at the end of the day, we all have similar goals in lif,” Levin said.” The idea of strength in numbers could not be more accurate, especially in times like these.” 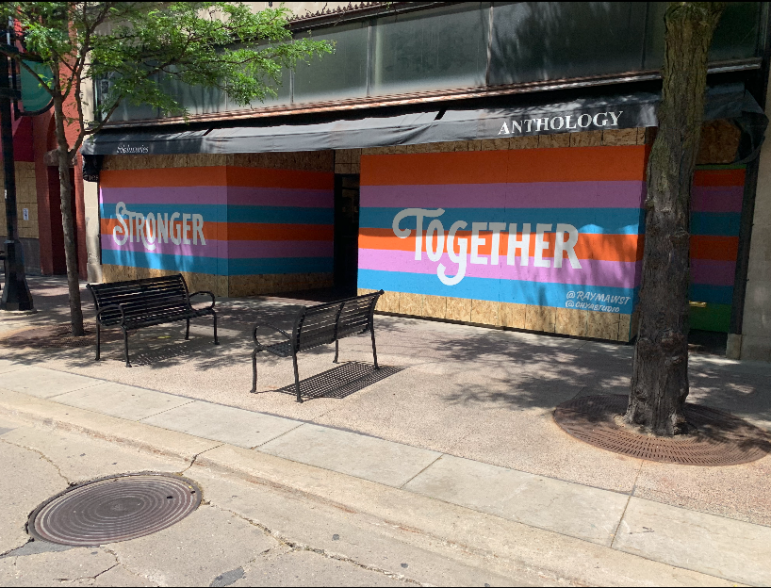 This protest art also raised tough questions, especially about defunding police. Murals like the one featured below led one interviewee, who asked to remain anonymous, to point out gains in racial diversity of police forces and racial justice since the 1960’s. As he said, “this is my least favorite piece because I don’t think the answer is saying f*** the police, dismantle the police, defund the police, or abolish the police.” Even though he disagrees with the message of murals concerning #DefundthePolice, this art made him engage with the issues, something he hopes it will also spark in others. 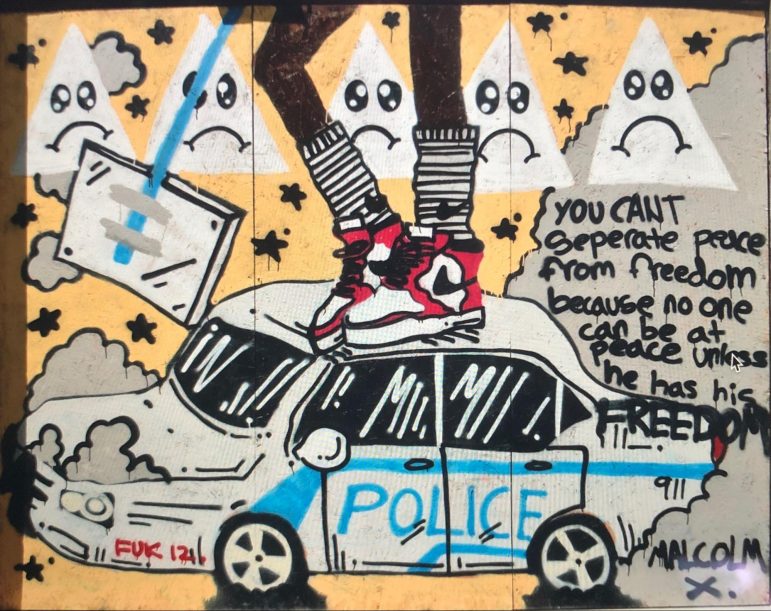 When I asked my interviewees what should eventually happen to this art so that this conversation could continue, the majority stated that eventually the murals will have to come down at some point. Many thought we should place these works of art in a museum as a way to remember what happened in Madison when this wave of the Black Lives Matter Movement called for change. With recent attempts to deface some of the images, the need to protect this art is that much more pressing. As William Braxton, an African-Amercan alum of the Business School at Marquette University, said, “Many people went to see these murals as they symbolize an object that could become a historic artifact.” He called the murals a “must see.”

I view this art in a similar light. Let’s preserve this art in museums so we can continuously reflect and fight for the America we all deserve. To express your views on what should be done with the State Street Murals, you can share them through this survey created by the City of Madison.