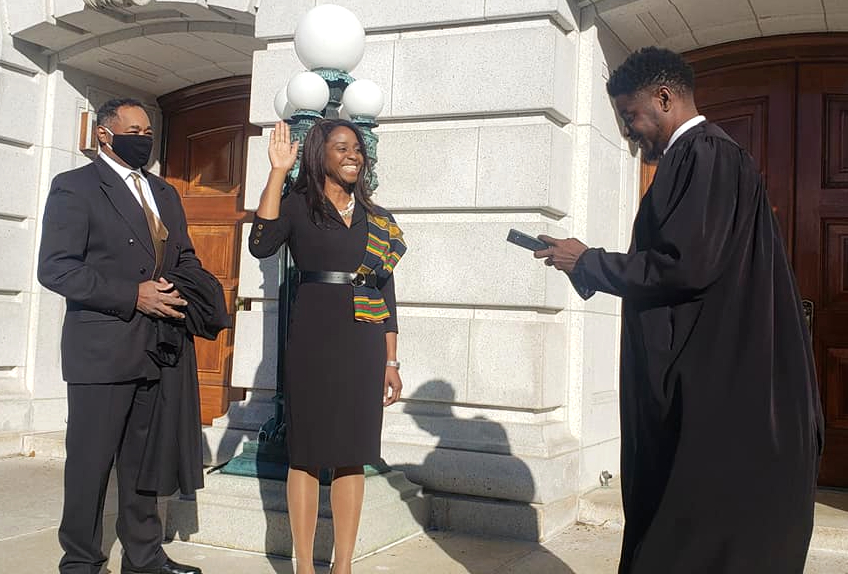 Dane County Circuit Court Judge Nia Trammell is sworn in as the sixth Black woman to serve as a judge in Wisconsin history. (Photo by Corinda Rainey-Moore)

On Monday, Oct. 12, the honorable Nia Trammell was sworn in as the sixth Black woman to serve as a judge in Wisconsin history.

“It took 172 years to have a Black woman serving in this place in history and so I don’t take that for granted,” she told Madison365. Trammell is the first Black woman to serve as a judge outside of Milwaukee County in Wisconsin.

Trammell will serve as the Dane County Circuit Court Judge for Branch 6 and said, as a judge, she hopes to marry her love of the law and her passion for service and she wants to use the judicial system to positively impact the way people in Dane County live. Her diverse perspectives, in addition to her roots in Madison and community involvement, help her serve the community.

“For some in the legal field, being a judge is one of the highest callings and for people like myself, we have a desire to serve as judges because we have a keen sense for justice," Trammell says. Trammell was born in southern Nigeria but considers herself a Madisonian after living the majority of her life here, she said. She grew up in the Northport Apartments on Madison's north side before moving to the south side. She graduated from West High School and got her undergraduate and law degree from the University of Wisconsin-Madison. She said growing up as a Black child in Wisconsin she never visualized or envisioned herself as a judge. She is the first lawyer in her family and the first judge.

“I bring a unique perspective given my lens as a Black woman, my lens as an immigrant, my lens as someone who experienced poverty growing up for some time, and also as someone who is deeply vested in this community," she said. "I see it from many, many different vantage points.”

The variety of perspectives is essential in the court system, Trammell adds.

“People from all walks of life interact with the court system and you can't just have a monolithic or singular view coming from the bench. And when you have people with a variety of backgrounds whether it's either race, whether it's sex, sexual orientation, or religion -- all of that brings to the richness of how a person will view a case.”

The judges are on a rotation plan based on court assignments. Trammell’s first rotation is on the juvenile justice rotation.

“When you're a traumatized child -- walking into a big courtroom with all those strange faces, it's a daunting experience, and you don't understand all of the languages. But what my hope is, given the experiences that I've had - not only growing up but also having served as a Dane County Court Appointed Special Advocate, it will allow me to bring a certain level of empathy and a certain level of understanding. Of course, always, with an eye towards administering justice and doing what's in the best interest of the child.”

On this rotation and all rotations, Trammell anticipates connecting people with resources in order to “bring people to a place where they are better able to traverse whatever the issue is that brought them before the court.”

A component of her job, she said, is to be attuned with what resources are available to people in the community.

“A large part of what a judge needs to do -- you're almost like a doctor in a sense, right? You've got to diagnose what the core root issues are that may have taken a particular family or a child down the path that they're going,” she said.

She listed resources such as nonprofits and human services as starting points; she said rehabilitation, mental health counseling and unemployment services help people get the best footing so they can thrive in this community.

Her knowledge of Madison and pulse on the community allows her to connect to the community but simultaneously be a non-bias practitioner of the law, she said.

She has served as the president of the Madison Equal Opportunities Commission, been a mentor for Big Brothers Big Sisters and a board member of Dane County Court Appointed Special Advocates, where she volunteered with the courts to represent the interests of children, Madison365 previously reported. She helped found the Madison Network of Black Professionals, which focuses on connecting and creating professional development opportunities for members and is a member of Sigma Gamma Rho Sorority, Inc., and the Madison Metropolitan Chapter of the Links, Inc. But she added that she doesn’t skirt around the rules and takes the rules of judicial conduct and ethics seriously. She said there are ways to be involved without being political, sensational and appearing as though one could not be impartial.

She added that she can not turn a blind eye to the disproportionate rate of people of color incarcerated in Dane County and the imbalance of power she witnessed for people who lacked appropriate representation as an administrative law judge.

“I think that being able to fashion different types of remedies that don't necessarily involve incarceration would be ideal,” she said. “I love this movement where a lot of courts are now looking at alternatives to incarceration and, you know, there are things popping up like drug courts, OWI courts, mental health courts, veteran courts, which allows the court to really to see the human side of people that come through the criminal justice system.

"And it allows for some level of creativity for those that can be reformed rather than just putting people in jail," she adds. "We're helping them become productive members of society. I think we're a better community when things like that can happen."