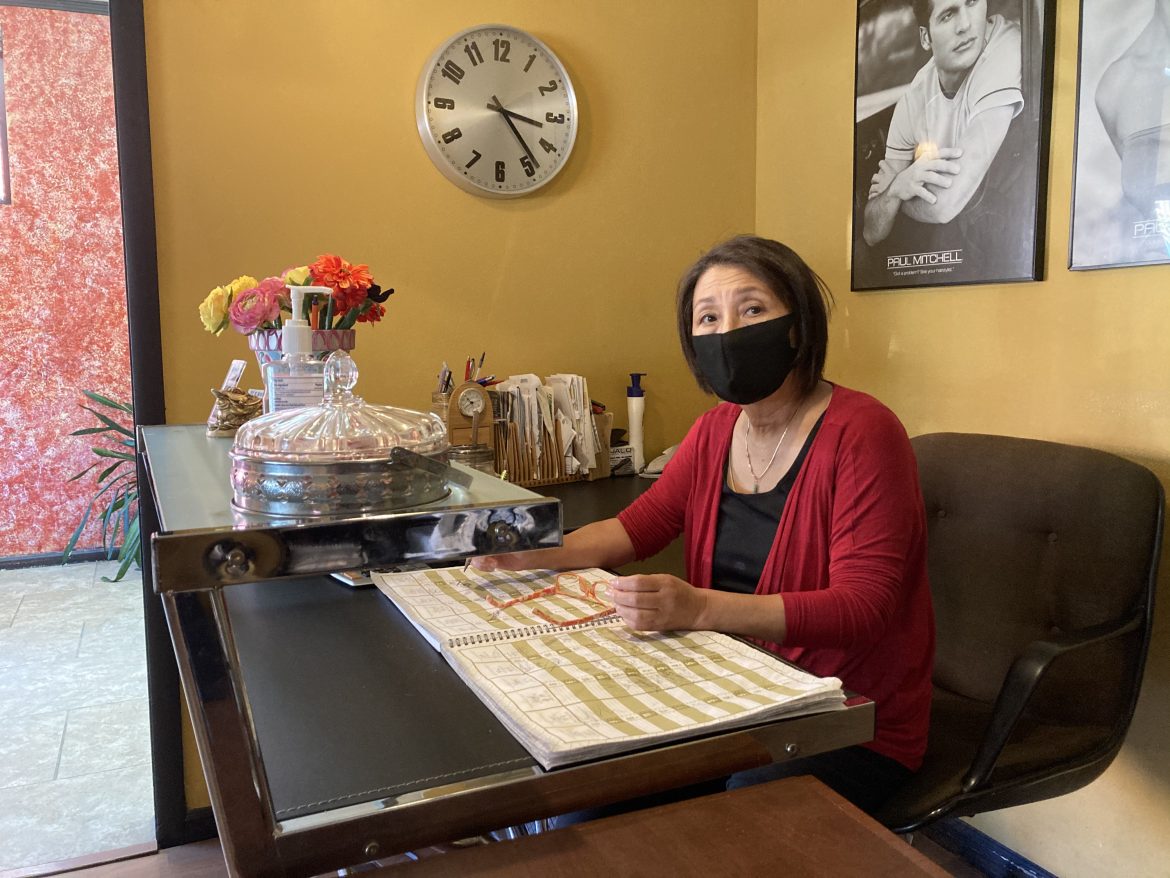 Salon owner Fannie Lowe is still working -- but a lot less than she used to be. Photo by Zhen Wang.

Small business owners have seen a slow but steady flow of customers since Dane County loosened restrictions in early June in the midst of the coronavirus pandemic -- and some have been able to adapt, while others haven't.

With modified options such as operating under reduced hours, offering curbside pickups and focusing on take-out, small business owners on Monroe Street have responded to a changing economic environment making efforts to balance out public health protocols and their footing in the business.

To Adapt or Not

Mystery to Me, an independent bookstore, pivoted quickly to meet the challenge of the pandemic. Owner Joanna Berg signed up for Bookshop, an independent retailers’ answer to Amazon, in March when she closed the store on short notice. Then, Berg promoted her modified business decision in an online newsletter where she said, “You order directly from their site...but WE get 25% of the sale.”

“[It] really helped our bottom line,” she said. Berg reopened her business on June 15 for its seventh anniversary. Two weeks later, it was closed again when Berg tested positive for COVID-19. One month later, she reopened it again allowing no more than five customers a time while encouraging book sales to go virtual.

But not all small business owners are able to shift away from physical stores. After staying at home for two months, Fannie Lowie restarted her hair salon in late May. “I’m lucky I received two calls a day,” the hairdresser said, half jokingly.

Lowie works mainly on afternoons, three days a week, a complete contrast to the pre-pandemic period when she worked nine hours a day from Mondays to Saturdays. But, Lowie said, “It’s kind of stable right now.”

Since she opened up the salon in 1986, Lowie has maintained strong customer relationships. Most of her customers are Asians, the elderly and UW students. “Quite a few of them haven’t come back yet. Why not? They are afraid to come,” Lowie said. She said one of her regular clients has cut her hair all by herself since late March.

The Struggles To Keep The Door Open

While most merchants along the Monroe Street corridor have maintained a steady flow of customers since June, when Dane county loosened restrictions, Carol “Orange” Schroeder, owner of Orange Tree Imports and president of the Monroe Street Merchants Association, said that restaurants have been hit hardest in spite of the fact many offer outdoor dining since early summer.

Marissa and Greg Neal had to permanently shut down their restaurant by June. Despite a quick move towards take-out and delivery in late March, the Tin Fox Restaurant saw a 60-75% drop in revenue for a whole month.

“Customers don’t order your food like they were before. It’s not the same experience,” Marissa Neal said. The couple’s restaurant values “the presentation of the food” and an overall dining experience

They had laid off all employees by April, leaving the co-owners to deal with everything. They became frustrated by unpaid bills and a notable decrease in take-out orders. Meanwhile, Marissa Neal applied to every possible pandemic relief program and felt quite disappointed as the co-owners were ineligible for grants or federal loans that had too many strings attached. 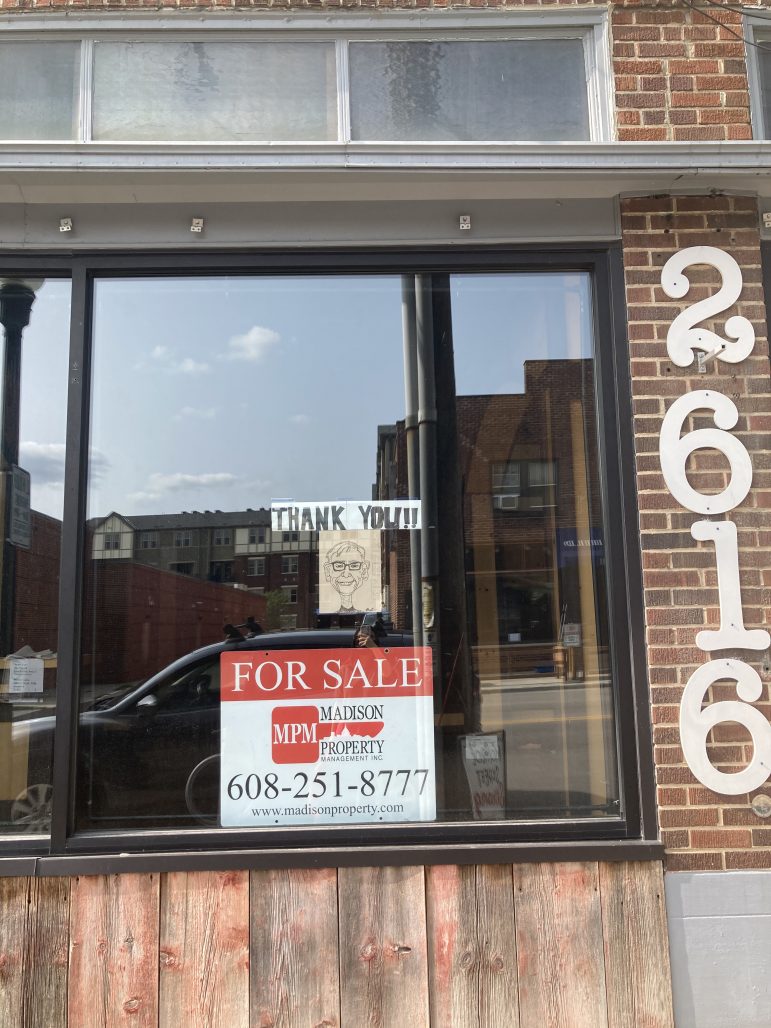 “None of the help has been aimed at...helping us see a way through,” Marissa Neal said. “I couldn’t see a way out of the debts that we were already buried in...and we felt so exhausted.”

While it is a challenging time for small business owners, Tag Evers, Alder of District 13, said, “The federal government is providing help now. Our budget is crap. We don’t have any money really that we can offer local businesses.”

There are a few vacant storefronts on Monroe Street now. “We may lose a few more businesses than would normally be closed,” Schroeder said, but the long-term predictions are not dire. The Monroe Street Merchants Association conducted a survey in June asking if small business owners felt they were in danger of closing and found it was “not an alarming percentage,” Schoeder said.

The upcoming holiday season, the celebration of Halloween and Christmas, is crucial for small business owners on the street. However, this year sees a completely different scenario.

Schroeder said many of neighboring businesses are preparing for the holidays with “limited expectations for what that will be.

“We’ll just have to take it as it comes,” Schroeder said.

The Orange Tree Imports owner also admitted that she ironically wants some people to come in but also is clearly aware that an influx of people would jeopardize the community health.

Shop owners keep up with online shopping, curbside pickups, and will run in-store sales while restaurants will deal with another challenge which is outdoor dining in the winter.

Mystery to Me, the independent bookstore, has a series of virtual events scheduled for a cold season when people will be stuck at home.

Fannie Lowie, the 66-year-old hairdresser, said she will stay low profile until the pandemic is over. The stylist is not worrying about her business due to its good location and her popularity with Asians and the elderly.

She has the patience to stay for the long haul. “There is really not much we could do until a vaccine comes out and works,” she said.