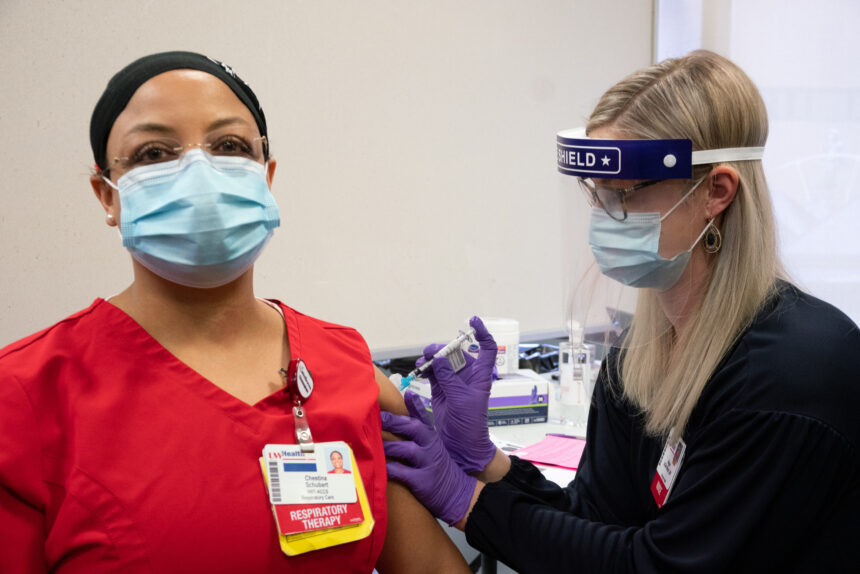 Tina Schubert was first in Wisconsin to get the COVID vaccine shot. Photo courtesy UW Health.

Recent data from Public Health Madison & Dane County shows racial disparities for those that have received the COVID-19 vaccine so far, but health experts say this is likely reflective of the state’s limited eligible populations and that organizations across Dane County are working to achieve racial equity.

Shiva Bidar-Sielaff, Vice President and Chief Diversity Officer for UW Health, said that it’s important to put these statistics into context, as vaccines are only available to a limited population of Dane County residents.

Bidar-Sielaff said that given the restricted nature of the vaccine, “it’s hard to arrive at many main conclusions at this point.”

The Impacts of Eligibility

Groups currently eligible for receiving vaccines include frontline health care workers, residents and staff in long-term care facilities and skilled nursing, correctional staff, police and fire personnel as well as adults 65 years and older, according to the Wisconsin Department of Health Services.

“The makeup of those [eligible] populations are probably less reflective of the overall population,” Bidar-Sielaff said.

Sarah Mattes, Communications Manager for Public Health Madison & Dane County, said the racial makeup of health care workers may also be less reflective of the overall population, though the data on that is unclear.

“We know that people of color are underrepresented in some professions, including health care. This may have an impact on the racial composition of those vaccinated so far. Unfortunately, we don’t have information about demographic composition of all eligible populations, so it’s difficult to assess the magnitude of this impact,” Mattes said in an email.

The next eligible populations in Wisconsin include those in education and child care, staff and residents in congregate living, those enrolled in Medicaid long-term care, other essential health care personnel, and some public-facing essential workers.

A large portion of eligible essential workers will be those that work in the food supply chain, such as agricultural workers, food production workers and those in the retail food industry, including grocery store and convenience store employees.

“That’s probably going to be a population that has a much larger share of our communities of color in it,” Bidar-Sielaff said.

According to a current CDC report, “race/ethnicity was unknown for approximately one half of the population who initiated vaccination during the first month of the COVID-19 vaccination program in the United States.”

Though missing race and ethnicity data in Dane County is much less than that of the national average, the problem still persists.

“Data are reported from different vaccination providers, and data quality may vary depending on many factors,” Mattes said in an email.

Prioritizing Those in Need

Data across the state also indicates that communities of color are being disproportionately impacted by the COVID-19 pandemic.

In order to address the disproportionate impact of COVID-19 on people of color, Bidar-Sielaff said that UW Health is focused on achieving racial equity through “access, distribution and education” around vaccines.

To determine priority groups for eligible UW Health employees, Bidar-Sielaff said they used an algorithm that factored in both age and social vulnerability index, which is determined in part by race and ethnicity. This type or prioritizing continued for patients 65 and older.

“In our 65+ patients, our first round of indications went to our highest risk 65+, which were all our Black, Latinx and Native American patients, and then after that we did it by age group,” Bidar-Sielaff said.

Bidar-Sielaff said this is based on the recommendation of the State Disaster Medical Advisory Committee, which determined that the criteria for sub prioritization can include racial demographics.

UW Health is also working with PHMDC as well as other health systems to work on “BIPOC community engagement and education around vaccines,” Bidar-Sielaff said.

This means having conversations within communities of color about the questions they may have regarding the vaccine, and helping to provide scientific knowledge so that people can make informed choices, Bidar-Sielaff said.

Starting in March, UW Health will be hiring COVID vaccine patient educators to work in the Black, Latinx and Hmong communities of Dane County.

Bidar-Sielaff said they are hiring vaccine patient educators “through trusted organizations that already work and are a part of those communities so that they will be reaching out one-on-one to [UW Health] patients in those demographics to offer education and navigation.”

The duties of vaccine patient educators will include helping individuals determine when they are eligible for the vaccine and helping schedule appointments.

Similarly, PHMDC is “partnering with community organizations to make sure information is provided to people that is accurate and comes from people they trust,” Mattes said in an email.

In addition to working within BIPOC communities, Bidar-Sielaff said it’s important to have providers that are already from those communities.

“We know that having racially concordant providers and trusted sources make a difference for people,” Bidar-Sielaff said.

In the end, Bidar-Sielaff said the goal should be to focus on addressing inequities long-term, as the vaccine is still in its beginning stages.

“This is not a sprint, it’s a marathon,” Bidar-Sielaff said.