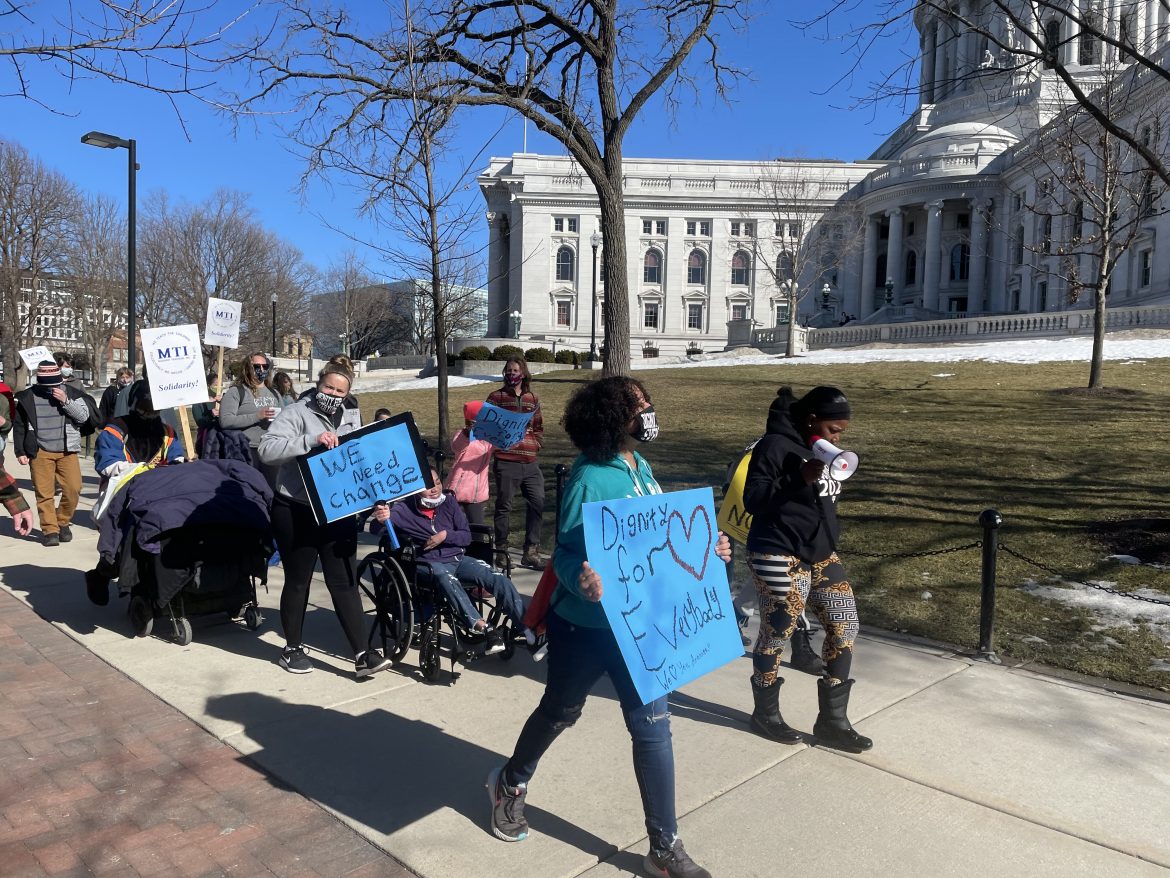 Approximately 35 people gathered outside the Capitol building Saturday afternoon to protest ableism in response to recent news that a hidden camera was placed in a room where disabled students receive personal care at East High School.

Madtown Mommas and Disability Advocates, a parent-run group, organized the event after news broke that hidden cameras were discovered inside East High School in an attempt to catch a custodian sleeping on the job. The cameras were hidden inside two smoke detectors, one in a coach’s office in the boys’ locker room and one in a room where disabled students undress and have their incontinence pads changed.

Though the cameras violated district policy, Madison police concluded no crime was committed. The district’s internal investigation led by a local law firm is still taking place, according to the Wisconsin State Journal.

Those in attendance on Saturday walked around the Capitol Square several times, holding signs and participating in chants such as “Dignity for everybody,” “My needs aren’t special,” “End ableism now,” and “Diversity is a fact, inclusion is an act.”

Autumn Neugent, a disability rights advocate and former Ms. Wheelchair Wisconsin 2019, said that the hidden cameras were evidence of “basic human rights being violated.” She also criticized Isthmus for the wording used in their reporting, calling it “dehumanizing language.”

Mattie Reese, a member of Madtown Mommas, said that the main goal of the rally was to bring awareness to the incident, especially to the fact that one of the cameras was pointed at students with disabilities.

“[The incident at East High School] really concerned us because one of our very own could have been on that camera,” Reese said. “We just wanna make sure that these things are not happening and not being swept under the rug.”

Reese said though she has seen some progress, she still feels that MMSD needs to work with the community more to better understand the needs of disabled students.

Martha Siravo, one of the founders of Madtown Mommas, said that she has been disappointed in the district’s “consistent inconsistency” in addressing the needs of disabled students. Siarvo said she’s been hearing from families about IEPs not being met, and feels that special education is not being addressed in the same way as general education.

“We’re focused on ableism because we’re not talking about it at the table,” Siravo said. “We’re just being talked about quietly. So, we’ll talk about general ed in the public sense, but when we talk about special ed and things like that, it gets dealt with separately.”

Siravo said that the separation of special education is a “systemic issue,” but she is optimistic about moving forward with the district’s new superintendent, who has shown support for the special education program.

Nicki Vander Meulen, a Madison Metropolitan School District Board member, said while she is an advocate for disabled students, she feels she needs the support of the community to make change.

“I’m one person, I need the community, and Madtown Mommas is probably what it’s taking to finally get it across that we need change,” Vander Meulen said.

Ultimately, Siravo said that the goal of Madtown Mommas is not just to create change, but to sustain it.

“We’re here to hopefully start the change. [But] we’re also here to support the follow through of it and hold them accountable to start making these changes and to be acknowledging our kids with dignity and respect and all the support that they need,” Siravo said.