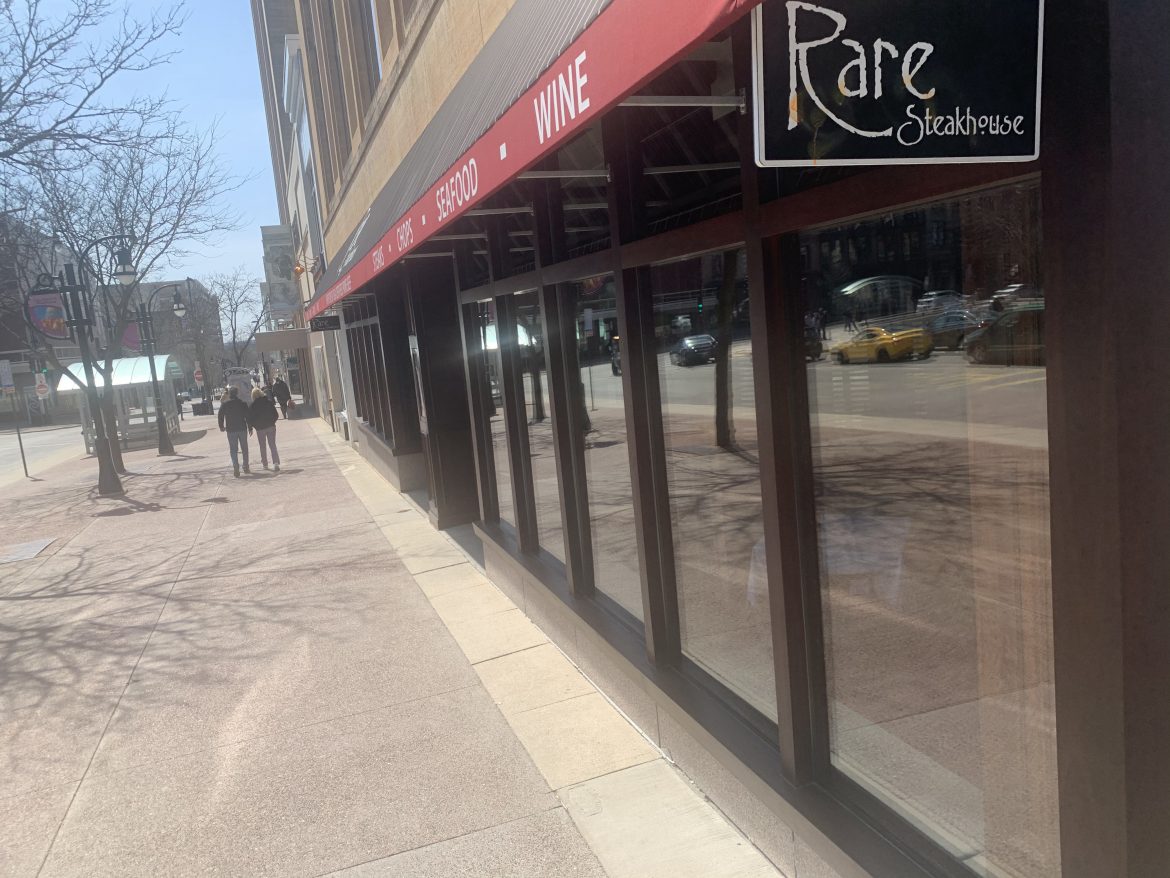 Rare Steakhouse on the Capitol Square.

The proposal, which was introduced by Madison Rep. Francesca Hong and Milwaukee Sen. Chris Larson, would raise the minimum wage for tipped workers in Wisconsin from as low as $2.33 to the state and federal minimum wage of $7.25.

The wage increase would take effect immediately, Hong said, but it would be up to restaurant owners to determine how they decide to distribute tips among their employees.

“It’s an abomination in my opinion that we still expect workers to rely solely on tips for their take-home pay,” Hong said. “I think that it’s time that we really work to help to bring concrete solutions to the working class.”

However, the Wisconsin Restaurant Association said in a statement that now is not the time to eliminate the tipped minimum wage, as “restaurants are experiencing the worst economic downturn in history” as a result of the COVID-19 pandemic.

Ryan Mirate, a server at Rare Steakhouse in downtown Madison, echoed this, saying that “money is very tight right now in the industry,” and he feels that raising the minimum wage could lead restaurant owners to cut staff.

Rep. Hong, who is a restaurant owner herself, noted that state and federal funding are on their way and have already been distributed to some restaurants to aid with economic hardship. In December 2020, Gov. Tony Evers and the Wisconsin Economic Development Corp. announced that restaurants and small businesses across the state would receive $45 million in assistance.

Hong also emphasized the need to keep wages competitive in the restaurant industry.

“Having worked at $2.33 an hour before, relying on tips is a really unsustainable wage to progress our industry.” Hong said. “I just want to look holistically at how to make the restaurant industry thrive, and I think at the root of that is supporting and uplifting our workers.”

The Downfalls of Relying on Tips

Kate Krueger, another server at Rare Steakhouse, said she would be in support of eliminating the tipped minimum wage, because the tipping system in place right now is “too volatile” and often makes servers’ pay vulnerable to how busy the restaurant is.

For example, Krueger said if there is an issue in the kitchen that affects a guest’s food, it often is reflected in the server’s tip as “they are the face that the guest sees, so they are (seen as being) at fault typically.”

Furthermore, Krueger said that in fine dining, when bills turn out higher than expected, patrons will often “try to save money by tipping less.” Krueger expressed frustration that many people have different ideas of what a good tip or good service is, and “don’t understand the 20 percent norm.”

At Rare, Krueger explained that there are other workers who rely on tips as well, such as bartenders and bussers, therefore servers must distribute a portion of their tips to other employees even if they have a slow night.

Hong recently began to pay all her restaurant employees a $15 minimum wage. This was a switch from the restaurant’s original division between front of house and back of house employees, which she said hindered camaraderie.

“I’ve realized that it doesn’t create a culture of collaboration, when really the end goal is to create a meaningful experience for the diners to empower workers,” Hong said.

Similarly, Lucille--another restaurant in downtown Madison--decided to start paying all their employees a base salary at the beginning of the pandemic in order to ensure all employees earn a livable wage. At the end of the night, tips are split evenly among all those in-house, NBC15 reported.

“We don’t want to breed that competition within one workspace,” Hong said. “I think it’s important that folks feel respected, and...building resentment between servers who sometimes take home hundreds of dollars more in a night then a cook would, [that] doesn’t create a working atmosphere that is good for the diner or good for the worker.”

Mirate said he is against equal tip distribution, because it is not fair to servers who bring in regular customers, and it could discourage servers from working hard for their tips.

“I think that it doesn't give incentive to the people that really do that hard work,” Mirate said.

Krueger said that while tipping is reflective of America’s “hustler” culture, she ultimately feels that eliminating a reliance on tips would be beneficial, especially for those who need to support their families and therefore require a steady source of income.

The Dark Past and Present of Tipping

Hong emphasized that eliminating the tipped minimum wage is just one way to start addressing inequities in the restaurant industry and brought up the dark past of the tipping system.

“We know that the history of this practice is rooted in a very unfortunate system that’s derived from white supremacy,” Hong said.

In America, many of the first workers to earn tips were newly freed slaves. When employers refused to pay them real wages, they were left to rely solely on tips for income, and the system evolved over time.

Today, 7 out of 10 of the lowest paying jobs in America are in the restaurant industry, and restaurant workers report experiencing the highest level of harassment of any other industry.

“We’ve seen low wages not only keeping income and financial security for our workers low, but it actually increases harassment,” Hong said.

This is why organizations such as One Fair Wage are working to end tipped and subminimum wages not just in Wisconsin but across the country.

“I think we need to look past just surviving as an industry,” Hong said. “We need to look at thriving, and that begins with our investment in our workers.”

One thought on “Proposal would end tipped minimum wage; opinions in the restaurant business differ”