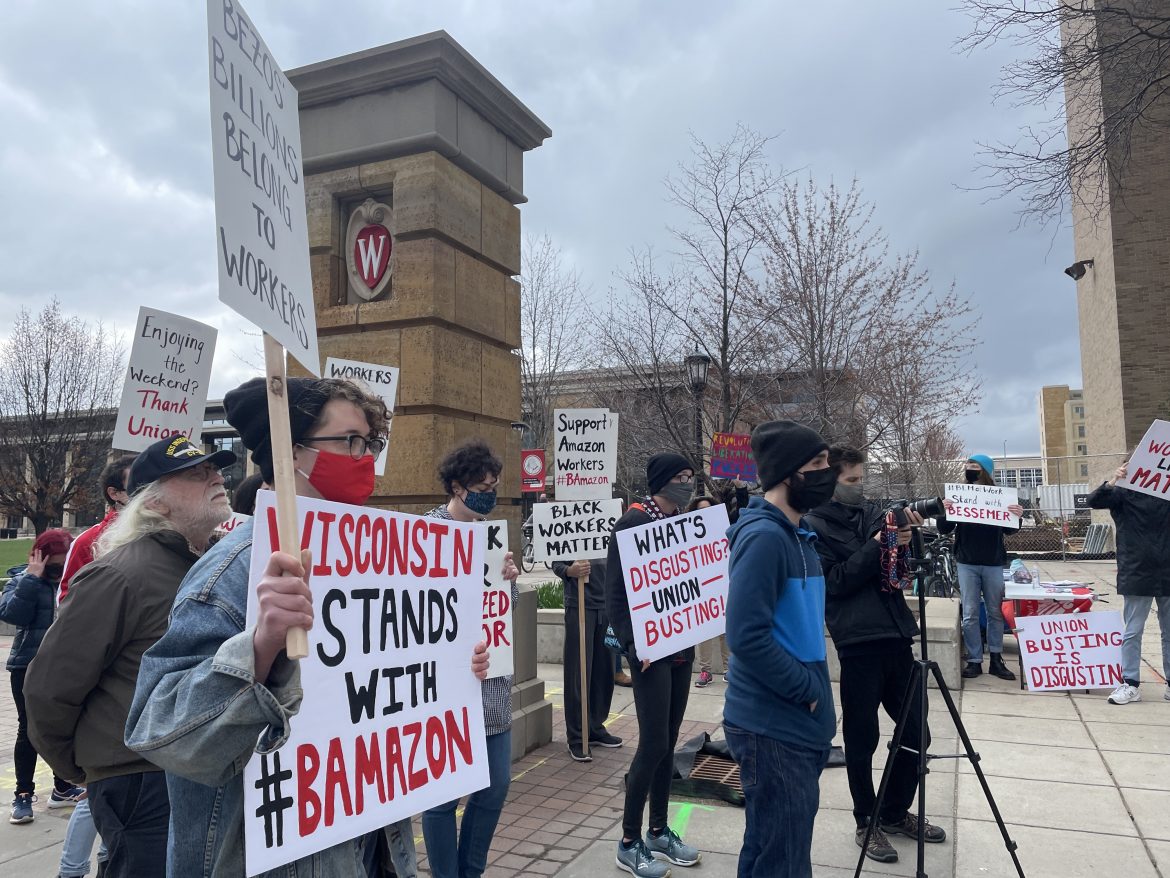 Earlier, Bessemer-based Amazon workers had begun the process to unionize employees and thus have the power to bargain contracts to improving working conditions and increase wages. But the recent union election, which lasted for months, ultimately rejected the union bid.

“They threatened their jobs. They offered to pay people bonuses to quit. And then, said ‘we'll hire you back after the union vote’ so that they wouldn't be able to vote, Druker said.

“There are so many reports of workers collapsing on the floor, some of them dying just because there was one warehouse that didn't even provide air conditioning,” Hudson said.

Hudson emphasized the importance of the Madison rally in terms of drawing people’s attention to the need for a mass movement and social activism since the COVID-19 pandemic brought out the prioritization of profits over the lives of people.

“We need to have the right to fight back when we aren't being treated humanely, otherwise we are basically just wage slaves and we are replaceable,” she said.

University of Wisconsin students, rallying along with the organizers, said that their attendance was the recognition of the Amazon workers’ efforts who face fierce resistance from a big powerhouse like Amazon.

“Workers are the reason that Amazon is so successful. It should be organizing for their rights,” said Bill Fitzgerald, a UW student and a member of Socialist Alternative.

Introducing himself as a big proponent of unions, Socialist Alternative organizer Carson Lucas said that he had grown up hearing a lot about union discussions at the dinner table. In the past decade his mother struggled as a teacher when former Wisconsin Governor Scott Walker’s Act 10 repealed collective bargaining rights for teachers and other public employees. Having been aware of such an experience Lucas is getting more involved in the labor movement now.

“If you want things to happen, you have to fight for it. You can't just wait for somebody to do it for you,” he said.

Lucas believes that a campaign with Amazon is a proxy for workers at all major and small businesses across America and having the possibility for every worker in the country and in the world to have a strong and supportive union that protects them and has their best interests in mind and not just the profit motive.

Social activists see organizing at Amazon as part of a long-term battle that comes with some internal challenges, including the need for solidarity between the different business units such as warehouse workers and computer programmers, even though they work in very different conditions at Amazon.

“Some of them are a lot better paid than others,” Druker said “They need to understand that in the end they are on the same side that they do the work that makes Amazon what it is, whether it is shipping and packing or running websites and designing games -- things that are necessary to make Amazon do what it does.”