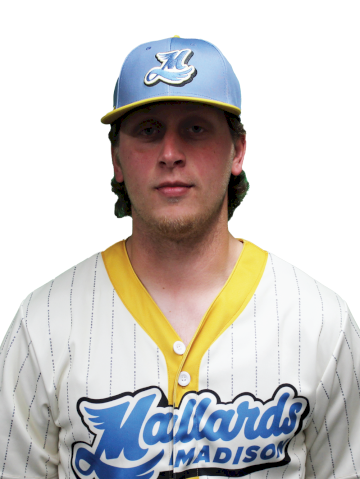 Neu said his catcher Drake Baldwin played a major role in his success.

“[He] calls a hell of a game back there. I love throwing to him,” Neu said. “He understands me well”

Neu rebounded from last week’s nightmarish seven-run showing by keeping the Dock Spiders’ offense in check Tuesday night, giving up just three hits and one walk to go along with three strikeouts.

Pitching coach Leon Davidson did not tell his starter to make any alterations coming into Tuesday’s outing.

“I told him just don’t change anything. Just come out firing and attack the hitters...and I was proud to see him make that adjustment,” Davidson said.

The Mallards didn’t let any cobwebs form around their bats. Designated hitter Alex Iadisernia punched a solo shot to right off Fond du Lac pitcher Riley Frey for a 1-0 advantage after one. Frey spun his team into a 2-0 deficit in the second after his wild pitch sent Madison left fielder J.T. Benson flying into home from third. The lead stretched in the third with RBI singles into center field from right fielder Bryant Shellenbarger and Benson to push it to 4-0.

Shellenbarger said that his squad, who recently completed their 22nd game of the season, has overcome the tension of working with teammates they’ve never played with before.

The Mallards set their sights next on a doubleheader against the Lakeshore Chinooks in Grafton starting at 11:35 a.m.