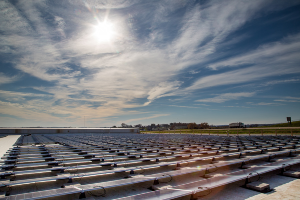 The future is getting brighter for wind and solar energy in the Midwest. Two Madison-based power companies, Alliant Energy Corporation and Madison Gas and Electric (MGE), have recently invested in clean energy sources that will affect thousands of customers across the Midwest.

Alliant and MGE are investing in wind and solar energy, respectively. Wisconsin Public Service of Green Bay will also invest in solar energy alongside MGE.

Alliant has partnered with Tradewind Energy, an independent renewable power developer to bring English Farms Wind Farm to completion. The wind farm will include 69 turbines that, under optimum conditions, are capable of producing 170 megawatts of electricity combined. The $300 million project is expected to generate enough energy for at least 50,000 homes.

English Farms Wind Farm is located in central Iowa and will only serve customers in Iowa. Wisconsin customers will not receive electricity from the wind farm. However, recently, Alliant has pushed for adding wind farms in Wisconsin. Currently, Wisconsin customers receive 8% of their energy from wind.

MGE, another Madison-based company, is collaborating with WPS to purchase a section of two solar farms, with the assistance of project developers. They plan to acquire a part of Badger Hollow Solar Farm and Two Creeks solar project.

Jeff Keebler, MGE president and CEO says this deal is, “another step forward as we move toward a more sustainable energy future and deep decarbonization”.

Badger Hollow will be in Iowa County, a strategic location chosen for its flat land, abundant sunlight, and proximity to transmission lines. The community is also willing to cooperate with the project, and many farmers have agreed to easements in exchange for monetary compensation.

Once built, Badger Hollow will be the largest solar farm in the Midwest, and one of the largest in the U.S. The behemoth will span 3,500 acres, and have around 1.2 million solar panels. Under peak conditions, Badger Hollow could produce 300 megawatts of electricity, which can serve 67,000 homes.

The Two Creeks solar project will be located in Two Creeks, Wisconsin. It is capable of producing 150 megawatts of energy under optimum conditions.

The two projects will cost a total of $390 million to build both Badger Hollow and Two Creeks. MGE’s share is around $130 million. Although the initial cost is hefty, solar energy—and wind energy—will be cheaper than fossil fuels in the long run. These resources are also unlimited, and harvesting them doesn’t cause damage to the environment. Wisconsin’s investment in clean energy is a choice that is beneficial both economically and environmentally.