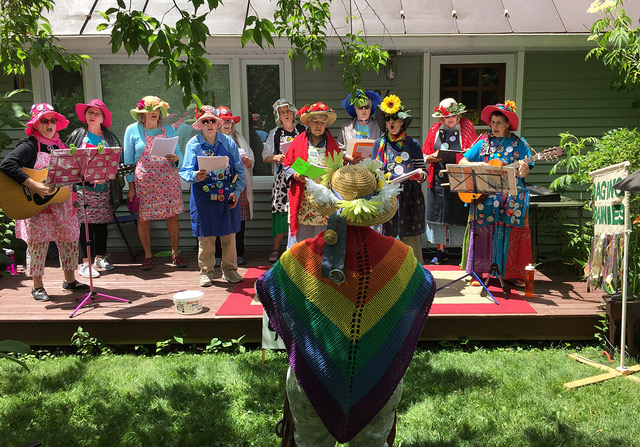 Suzy Bickley, an activist and former educator, has lived in the Madison community since 1970 and been a member of the Raging Grannies of Madison since 2007. Bickley describes the Raging Grannies as a group of older women devoted to social justice and each other. For the past 15 years, she has marched, protested and sang for a better future.

The original songs the Raging Grannies produce are humorous, but they’re meant to bring attention to important subjects like LGBTQIA+ rights, environmental justice, health care reform and reproductive rights. The pandemic put a halt to their activism, as many of the Grannies or their families faced health concerns. Right now, they’re starting to rehearse in person again and are preparing to sing on Saturday at the Dane County Farmers’ Market and recently performed at a downtown abortion rights rally in response to a leaked draft of a U.S. Supreme Court opinion that would overturn Roe v. Wade.

Well, I think we’re very splintered. And, honestly I don’t know whether those splinters are substantive or whether they are superficial… the fractured nature of women’s movements, which also have a pretty cohesive agenda, in terms of women’s health, equality and jobs. I don’t think there’s a war among the women themselves about those issues. But the organizational differences are magnifying difference… Another problem is that we have no symposium for the airing of all these grievances. And some way to bring people together to address them, talk them out and see there is common ground.

The other piece of Madison is what a racially divided environment we have here. Madison is said to be one of the most segregated cities in the country, which is very hard to believe if you’re a white middle class person, because you don’t feel it. And it is true for residential areas. It is true for educational achievements. …We’re striving to be better represented and we have tried, on many occasions, to have African American women be part of the grannies… And it’s tough. For example, one woman who joined who had a great voice and was eager to sing and there were all these issues that came up. She didn’t have a car so getting to rehearsal by bus was almost impossible. She didn’t live near enough to anybody that could pick her up on the way… It is a sharp reminder of white privilege and what we enjoy, and the people who don’t.

One of the things that the pandemic revealed is how unequal our health care is. And as much as I believe in lofty goals and things, if you’re not healthy, and you don’t have access to a good diet, and if you are housing insecure, the participation [in protest] is based on all those other things being satisfied. If you’re sick, you can’t sing or you can’t walk, or you can’t march and if you’re unemployed and employed at nights or at times when you can’t do the things that other people are doing… And mostly if you’re sick, you’re nowhere because you can’t participate when you’re ill. So, you know, the chicken and the egg, what do you do first? Certainly health equity is a major question. I mean, how many homeless children and Madison? In our condo here we have been supporting a project that provides food for homeless children in Madison, by delivering bags of food that they take home with them… for their family. That’s huge! You know, there’s no energy left over for political protest when your family isn’t eating. So I guess I would start with the very basics of the disparity in our wealth and in our ability to access the things that we need as prerequisites of protest. You don’t protest on an empty stomach usually.

I moved to Madison from Philadelphia, and I thought I’d landed in paradise. If you have a good idea in Madison, and you can find a friend or two or three or seven, to work with you and spread it, the chances of making a difference somewhere felt really opportunistic…I’m sobered now by the naivete of all of that. But it was still a great rush when I got here and began to form liaisons with other people who were interested in literacy as I was. But I think now we’re in a different time… I don’t know what to even hope for. …I’ve always said, “OK, I can make it better.” But I am sobered by what I see…I’m sobered for people like you of your generation. … I want to give you hope, because I think that’s our job is to enable you and yours to make a difference. Because we’re getting tired. I marched in the ’60s for birth control and for better women’s health. We rarely even said the word abortion because this was before Roe v. Wade. And look where we are —we can’t close Planned Parenthoods fast enough in this state… I’m not giving up because, the grannies, we play to our college students who come to the farmer’s market? We feel like this is our job here. We’re demonstrating that it doesn’t matter how old you are, you can still get out there and make a fool of yourself for the things you believe in.