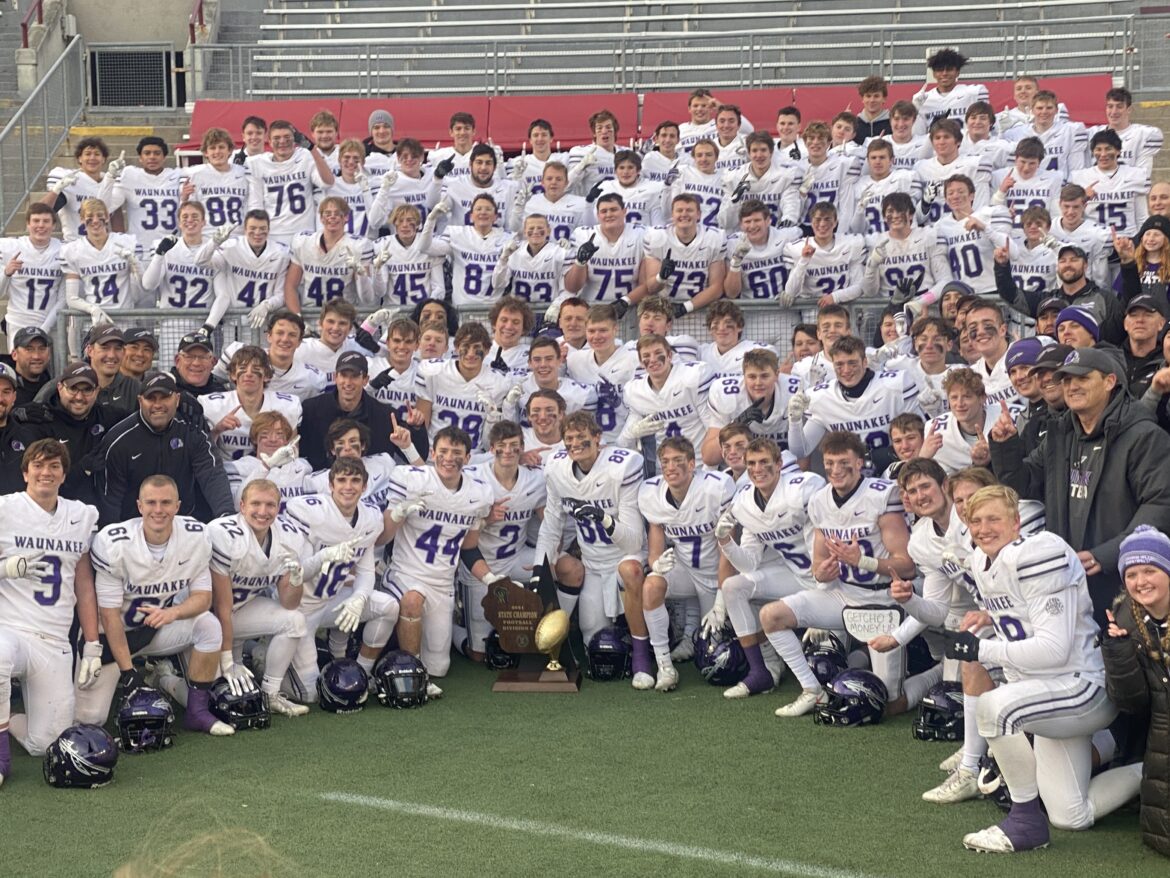 Dane County was represented by both Waunakee and Sun Prairie at the WIAA football state championship this weekend, winning one state title.

Waunakee’s momentum was fueled by a 97-yard kickoff return by senior Ben Farnsworth late in the second quarter. Farnsworth fumbled the kickoff prior to the one he returned for the touchdown.

“We are always talking about the clean slate mentality,” Farnsworth said. “We just went out there with a clean slate, followed the blockers, and took it to the house.”

The return came right after Homestead was able to march down the field to tie the game 7-7. This momentum shift led to a Warriors’ interception just a minute later and opened the door for senior running back Michael Gnorski to finish the half with a 19-yard rushing touchdown.

Waunakee’s balanced offensive approach took them the rest of the way. Quarterback Quentin Keene finished with 193 passing yards with a 66.7% completion rate with two interceptions. The Warriors finished the game with a pair of passing and rushing touchdowns to go with Farnsworth’s return.

“It is a long dream come true,” Farnsworth said. “It hasn’t really set in yet but we’re going to have a nice ride in a firetruck, and I think it will hit me then.”

Homestead had a better day on the ground, with a total of 260 rushing yards, 140 more than what Waunakee finished with. Junior quarterback Sal Balistrieri ran for 106 yards himself and finished with two of the team’s three touchdowns.

In the Division I title game, Sun Prairie fell just short of the title, losing to Franklin 17-38. Both teams came into the final contest undefeated with a 13-0 record.

Sun Prairie had a slow start offensively. The Cardinals were only able to score one field goal while Franklin tallied a total of 17 points in the first half, on two touchdowns and a field goal.

The beginning of the second half did not start much better, as Franklin was able to score

on their second drive of the half to put the Sabers up 24-3. Sun Prairie refused to give up  and fought back to make it a one-score ball game by the end of the third quarter.

“I don’t know how many people thought we would come back and have a chance to win,” said Brian Kaminski, head coach of the Cardinals. “Then it was 24-17 and we got the ball with a chance to win.”

In the end, Franklin’s senior quarterback Myles Burkett proved to be too much for Sun Prairie, throwing for 276 yards, with three touchdowns and a 70% completion rate. Burkett is currently committed to UW–Madison.

“That’s a great football team,” said junior quarterback Jerry Kaminski. “It really hurts. These are guys we’ve grown up with our whole lives. I couldn’t be more proud of them. We fought.”

This was Sun Prairie’s fourth appearance in the state tournament. Their last appearance came in 2017, where they lost to Kimberly. It was also Sun Prairie’s last year together before it splits into two high schools next year. This inspired the team’s mantra of “The Last Dance,” alluding to the last time this group will for certain play on the same team.

“It stings right now but give it about a week or two and we will be able to reflect on a great season,” coach Kaminski said. “Our team played like the character of a champion tonight and what it takes to be successful in life. It’s bigger than football.”