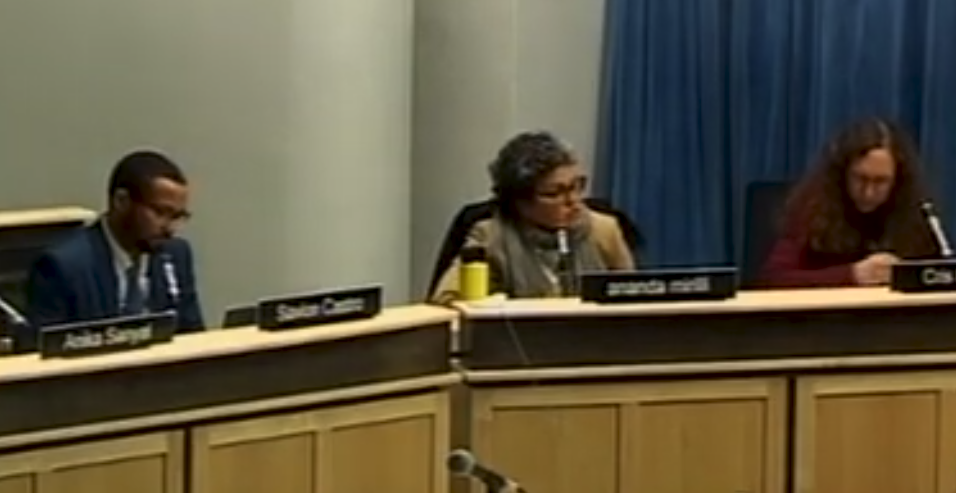 Madison Metropolitan School District Board of Education members announced Monday night that they will work with school district administration to amend the zero-tolerance policy that resulted in the termination of Madison West High School security staff member Marlon Anderson.

Board president Gloria Reyes said that district administration plans to review implementation practices for its policy on the use of racial slurs by staff “and account for appropriate nuances” as soon as possible. The board will also form an “input group” to gather community feedback for changes in the policy, and will charge an equity team with designing curriculum across grade level “regarding the use of racial slurs.” She did not elaborate on who would be invited to join that input group.

“This was a test, I think, for our district in our community,” Reyes said. “It was an example of what happens when we’re trying to tackle racism within our institution and our community.”

Anderson was terminated two weeks ago after he used the n-word in his response to a student who’d used the term to address him. Anderson has since been reinstated, but remains on administrative leave pending a formalized plan for him to return to work.

Anderson’s initial firing was met with significant protest from West students and staff. Over 1,000 students walked out of West to the Doyle Administration Building on October 18 in support of Anderson’s reinstatement to West’s security staff.

While there is no written “zero-tolerance” policy, the district has adopted a zero-tolerance practice after a number of incidents involving teachers using racial slurs in the last school year.

Each board member spoke in support of putting that practice under scrutiny.

“I look forward to examining this policy going forward, and to doing this transparently so that the community has a voice, and especially doing this in partnership with our Black Student Unions. I think their voices are critically important right now,” board member Cris Carusi said.

Board member Ali Muldrow raised concerns at the meeting about the difficult challenge of meaningfully tackling racial slurs, and notably the n-word, through policy.

“If we’re going to talk about the n-word, we have to talk about that in the context of racism and have conversations about things like slavery and civil rights and civil disobedience and the role of police in schools,” she said.

“I think we have to do that with a sense of complexity and nuance, and I think our inability to do that is the reason that we have continued to perpetuate some of the most horrific results for African American students in the country,” Muldrow added.

Board members also voted to approve a $493 million operating budget, which adds funding for the district’s Black Excellence Coalition and a base wage increase for school employees.