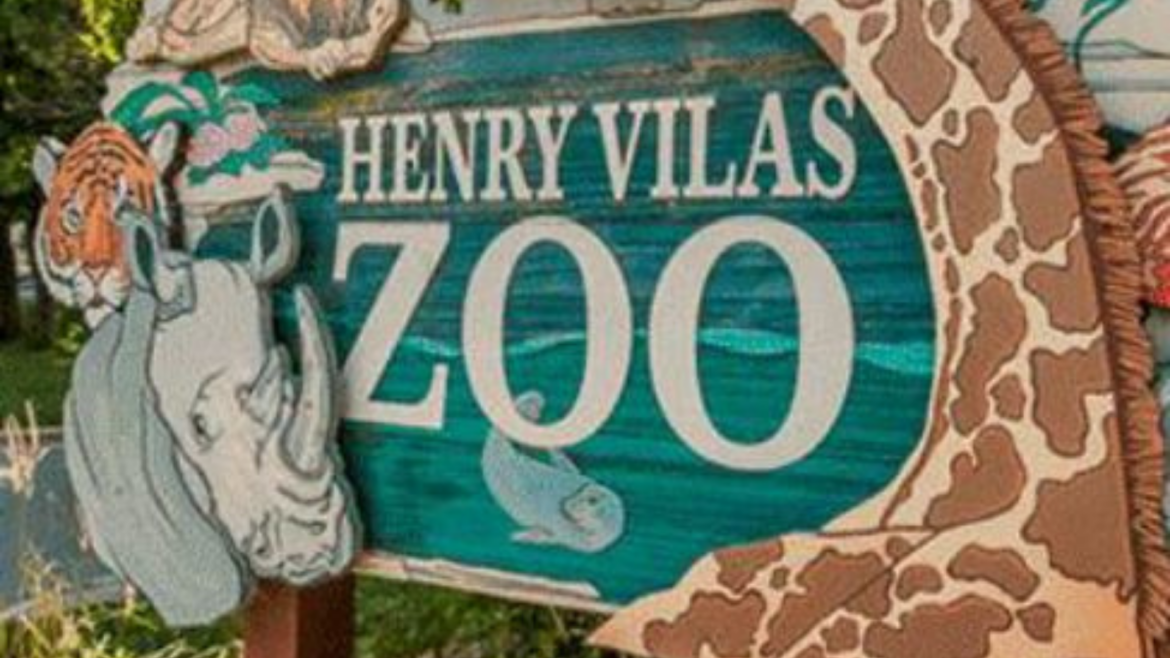 How much do real badgers live to up their name in the ‘Badger State?”

There is an ungodly sound coming from the Henry Vilas Zoo.

The autumn morning has fangs, the air just cool enough to be nippy. Clouds in the sky warn of drizzle. Zoogoers haven’t been deterred completely, however — a modest number of minivans and SUVs line the parking lot.

“Good morning, welcome!” say two zoo volunteers stationed near the front archway. The older, a gray-haired woman with a kindly face and round glasses, sits while her younger companion stands by her side. Both are dressed in the zoo’s uniform of an ocean-blue shirt, but with hoodies thrown on top to ward off the chill. There are no visitors in sight and the two seem happy to welcome a new prospect.

One question has brought me here. The mysterious sound is a distracting curiosity, but it cannot break my focus. New to Madison, and to Wisconsin, I want to know more about the local avatars of our state’s animal.

“The badgers?” The two volunteers exchange glances. “I don’t know much about them.”

The older woman squints in thought. “How many badgers do we have? One or two?”

On the advice to flag down a zookeeper should I see one, I extract myself from the conversation.

Henry Vilas Zoo is in Madison, Wisconsin — the Badger State. The “Badger State” moniker dates back to the 1820s, when the state’s lead miners would supposedly live in their mines during the harsh winter months (though the veracity of this is disputed, the nickname stuck by the mid–1800s). The University of Wisconsin-Madison adopted the badger as its mascot in 1889. When the live animal proved too unruly, they replaced him with the raccoon Regdab (badger spelled backwards), according to the school’s website. Buckingham U. Badger — aka Bucky — the big-headed, striped-shirt-wearing university mascot made his debut at a football game in 1949. Eight years later, Wisconsin made the badger the official state animal.

One (read: I) would think that fame and state pride would raise the profiles of Dekker and Kaminsky, the zoo’s badgers.

The theory is 0-1. I loop my way around the zoo’s paths. Construction cuts off the more direct route. I rub my hands together and blow on my fingers, trying to warm the numb appendages. With the exception of myself, the zoo’s visitor population seems almost entirely made up of retirees and families with small children.

That I get lost is no surprise — had I pulled out my phone’s GPS I still couldn’t have guaranteed that I would reach my destination. I follow the path around, past the ice cream shop, the deserted children’s play structure shaped like a giant tree and a crew putting up twinkle lights on the zoo’s trees for the annual Zoo Lights winter holiday event. Every so often, the unidentified groaning sound echoes.

Then, at last, in giant letters: BADGER.

A small concrete building squats behind the sign, painted a now weather-faded red, with an adjacent outdoor area pockmarked with holes.

Hearteningly, I am not the only one outside the badger enclosure. There are two families standing there, the kids hauling

themselves up to see over the chest-high fence. Nothing stirs. The families move on, one of the moms snapping some quick pictures of her children with the nearby Bucky statue. They do not go inside the badger building.

“Hm,” I mutter, staring down at the badger information plaque. So that’s… 0-2 for my badger fame theory?

And adorably so, curled into a ball inside a hut filled with straw. Just his — whether Dekker or Kaminsky, it’s impossible to tell — back visible to the viewing glass.

I loiter there for a while. The beloved boys remain in bed.

Badgers, alas, are nocturnal. Per the zoo, they live an average of 26 years in captivity and 14 years in the wild, are anywhere from 1.7 to 2.8 feet long and 8.8 to 26 (quite the range!) pounds in size. With long claws, sharp teeth and a triangular head built for burrowing, they are primarily carnivorous and can dig with astonishing speed.

That last fact is hard to imagine staring at the peaceful ball of gray floof.

Who ARE you? I think.

The plaque outside holds some hints. The brothers, named after Wisconsin basketball players, “were rescued on March 23, 2015 (the day the Badger Men’s basketball team played in the Sweet 16). Found in Mineral Point, Wisconsin, the family who discovered them contacted local wildlife rehabilitators, who called the zoo. We were happy to give them a home.”

That makes them six-year-old Wisconsinites.

I feel a prickle on the back of my neck. Looking up, I lock gazes with someone staring straight at me.

“Any comments on your neighbors?” I ask the sandhill crane. It remains mum, though it seems pleased with the attention, moving closer to the edge of the fence. Later it will ditch the silence to call back and forth to a delighted — and very loud — young boy.

I wander. The volunteers at the front had advised me to look for someone in a zoo-blue shirt to speak with, so I keep my eyes open. I’d seen one sweeping out the camel exhibit earlier but now they’re nowhere to be found.

The strange sound reverberates again, closer this time. Following it leads me to the lion den.

And there I find a Wildlife Champion volunteer. A goldmine of information, he chats amiably between telling other visitors about the lions. He has stories about many of the animals: the lions are a couple, Pelo and Shakura, whose adolescent son has challenged his father’s dominance and was moved to the back, but the three roar back and forth to each other. Harmon, the giant leathery goofball of a rhino, came from Florida with his favorite log, which he must be allowed to take with him everywhere. With Halloween coming up, the bears have been given pumpkins for enrichment, which they love to chomp on.

When I ask about the badgers, he hesitates. “I don’t know as much about them,” he says. He tells me they’re brothers who came as young cubs. Usually as male badgers mature they would, like the lions, grow territorial and fight, prompting their separation. These two never fought so they’ve been allowed to stick together.

According to a press release, Henry Vilas Zoo used to have a third badger, Bucky, adopted later. Bucky was moved to the Green Bay Zoo earlier this year to be a companion to Helen, their resident reclusive badger. Alas, Bucky the badger — BUCKY THE BADGER! — was not remembered by current Henry Vilas Zoo volunteers.

May your grass be greener (your dirt…dirtier?) elsewhere, Bucky.

“I think the rhino and the giraffe are zoo favorites,” John says.

With a head full of zoo animal gossip, I am little closer to answering my burning question of: Dekker and Kaminsky badgers — who are they? I walk back to the badger exhibit. One last go.

Now noon, several people come and go. One of the badgers is out for a brief moment, snuffling for a treat, before he heads back to bed. I ask some visitors what they think of the animals. One man says he likes their names, as a Badger basketball fan. Another, Wayne from Idaho, says he’s seen wild badgers before — his dad stepped on one once, coming in late at night from parking his tractor in the barn. Contrary to expectations, Wayne’s dad is not now one-footed. “Badger ran off. Surprised him, though.”

Badgers. The “don’t tread on me … please” animal.

I stare at Dekker/Kaminsky through the glass. If he’s not ferocious, tenacious, pugnacious as I’d thought, who is he? Is he just

another animal, vaunted in Wisconsin only for the mere happenstance that the state’s lead miners of yesteryear shared similar burrowing tendencies?

Is it possible the badgers are … boring?

“I love the badgers!” a cheerful little voice pipes up next to me. A girl, 10 years old at the most, leans against the glass next to me, a bright grin spread across her face.

“Are they your favorite?” I ask.

She doesn’t hesitate. “We’re the home of the badgers so … yes!” She strikes a pose, arms stretched wide.

Her dad chuckles, coming to stand behind her. “I think your heart is with the seals.”

I laugh, but the girl insists. “My heart might be with the seals, but my affection is with both of them!”

The quote sticks with me as I head out. I pop into the gift shop, curious. There is only one badger toy, a large plushie. When I ask the checkout clerk, she explains that the toys are hard to stock. The zoo competes with every other prospective buyer in the state, which means supplies are often limited. But they are very popular among zoogoers. “We get asked a lot,” the clerk says.

Back outside in the gold autumn sunlight, families stream through the entrance. The lions roar. Later tonight there will be a Badger men’s hockey game, a raucous 1-0 win that will pack State Street bars with reveling students.

And our badger brothers Dekker and Kaminsky will celebrate by spending a quiet and unremarkable night in.