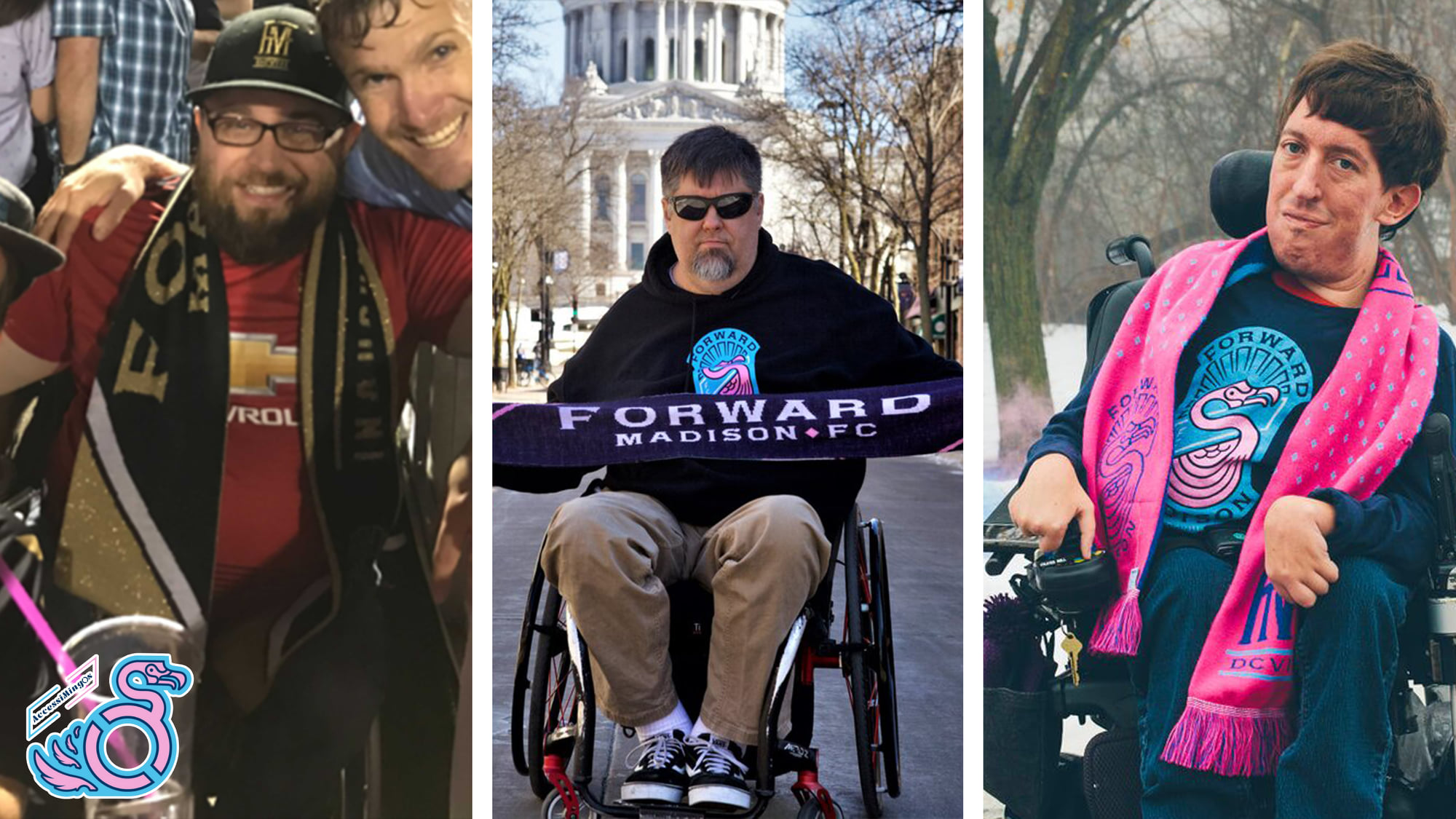 AccessiMingos, an offshoot organization of FMFC’s Flock support group, dedicated itself to providing a space and a network for fans with disabilities to enjoy the team’s games together at Breese Stevens Field in Madison.

The group is a trailblazer in the realm of United States soccer. AccessiMingos is the first supporters group in North America specifically for disabled soccer fanatics, which was also organized and established by the fans themselves.

AccessiMingos cofounder Brian Messman said he was originally a member of The Flock, a large umbrella organization which encompases a variety of sub-groups devoted to FMFC fandom. These groups include Mingo Ladies, a women's supporters group, and Featherstone Flamingos, an inclusive supporters group focused on the Black experience, and La Barra 608, focused on Latino fans.

“I had been thinking about starting a supporter group for individuals with disabilities for Forward Madison,” Messman said. “We had been talking about getting it started for last year before the pandemic started. It’s bigger than we thought [it would be] at the beginning. We’re really excited about the possibilities of where this might go.”

Shultz said AccessiMingos also captured fascination on an international level. Shultz said a representative of Chelsea FC in the United Kingdom reached out to AccessiMingos and offered to help the group to build a larger social media presence.

“We have people reaching out that have worked for huge Premiere League teams in England,” Shultz said. “Somebody that has worked for Arsenal FC reached out to us. We’ve had a lot of people reach out from all over.”

While Messman and Shultz said the primary purpose of AcessiMingos is to provide disabled FMFC supporters and members of The Flock with a support group of their own, both men said their organization also lobbied FMFC Chief Operating Officer Connor Caloia to implement a variety of accessibility measures at Breese Stevens Field.

Caloia said some supporters contacted him during the club’s inaugural season in 2019 and put forward a series of recommendations aimed at improving access to the stadium and its amenities for disabled visitors and Flock members over the course of multiple conversations.

“We try to keep  a very open line of communication with our fans, and we appreciate them reaching out,” Caloia said “We basically asked them to come to us with a list of improvements that they would like to see to improve accessibility at the facility. We’ve committed to making those changes.”

Messman said the changes, which were announced concurrently with the announcement of the formation of the AccessiMingos, included constructing a ramp to grant better access to the merchandise area, a cleared pathway to the concession booth for wheelchair-bound fans, improvements to portable restroom placements and a walkway to the stadium which would ease the burden of reaching the stadium on disabled supporters attempting to navigate their way through grass in wheelchairs.

Shultz said Caloia and the FMFC organization were extraordinarily receptive to the accessibility concepts brought forward by AccessiMingos and invited the founders to a meeting to discuss implementing their proposals.

“Forward Madison is the most open and the most accommodating to the kind of stuff we’re trying to do that I’ve ever seen a club [be],” Shultz said. “When we brought this to Forward Madison, they reached out to set up a meeting. I think they’ve done everything they could do within their ability.”

In 2019, FMFC placed handicap-accessible restrooms near fans, but Caloia said the club is currently working to structure the stadium in a way which allows disabled fans to reach bathrooms with greater ease. Caloia said FMFC will also offer complimentary tickets for caregivers assisting hadicapped stadium-goers.

As FMFC looks to its first 2021 home match on May 15, Caloia said began working to construct wheelchair-accessible ramps and finish a paved path to Bresse Stevens field for wheelchair users during the offseason and is on pace to finish both projects by opening day.

“They [construction projects] are in process right now, but we expect them to be completed by May 15,” Caloia said. “Any projects we do at the stadium, we see as collaborative between us and our fans. The projects that we do here are basically a response to what we think the fans want to see happen at the stadium.”

Shultz and Messman said AcessiMingos originally hoped to cater to FMFC fans whose disabilities imapired their mobility but the group currently plans to explore the possibility of broadening their outreach to supporters who experience other disabilities like hearing and sight impairments.

Messman said agenda items to assist blind and deaf individuals could include working with FMFC to create a more easily navigable stadium for blind patrons and interpreting the various chants shouted by The Flock at games into sign language.

With their newfound platform in the world of US soccer, Shultz said AccessiMingos used its platform to work sided-by-side with multiple clubs across the country with the end goal of providing disabled fans in each respective city with greater access to stadiums and fostering a love for the game among men and women with disabilities.

While advocacy and activism were never the primary goals of AccesiMingos, such efforts inevitably became an aspect of the group’s identity.

Shultz said he views his very presence and visibility as a man in a wheelchair as one which makes him an advocate for disabled fans and Madisonians, and he hopes to use his position as a means to promote both awareness of the disabled’s needs and a positive social environment for these individuals, while also sharing his love for the game of soccer.

“When you have a visible disability, you’re sort of an advocate whether you want to be or not,” Shultz said. “That doesn’t change when we’re at the games being soccer supporters. We love Forward Madison. We want people with disabilities to be able to support Forward Madison.”