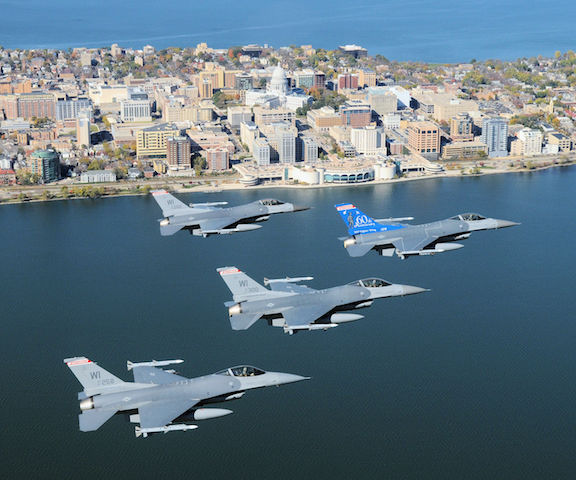 On a quiet Saturday in October, Ed Blume was working in the yard of his home, raking the leaves that had begun to fall from the trees in his neighborhood, a residential community just south of the Dane County Regional Airport. Suddenly, a piercing crescendo broke the calm of Blume’s afternoon. Blume saw pedestrians on the sidewalk clamp their hands over their ears as the noise grew louder, rising to an abrasive wail as a flight of three F-16 fighter jets tore over Blume’s house at low altitude.

Having lived in this east side home for ten years, Blume is no stranger to the noise of these aircraft – and he’s not the first generation to learn to live with them. Combat aircraft have been a regular presence in the skies over the Isthmus since the 1942 activation of Truax Field, then a military training facility for aircraft technicians. Today, Truax represents the active military component of the larger Dane County Regional Airport, having hosted fighter-interceptor aircraft since 1952.

Though the aircraft have changed over the years, their presence represents a point of contention for Madisonians: for some, the aircraft are a reassuring display of American military power; for others, a troubling symptom of Madison’s complicity in the American military-industrial complex. This debate reached new heights in December, when the U.S. Air Force slated Truax Field as a top candidate among five military facilities to receive the new Lockheed Martin F-35 Lightning II.

Long a subject of political debate surrounding production delays and budgetary excess, the F-35 is the product of the most expensive military weapons project in history. Representing some of the most advanced contemporary military technology, the new plan would station 18 F-35 aircraft at Truax Field by 2023.

For Air Force officials, Madison represents a strategically appealing home for the new aircraft due to its central positioning along the United States’ northern border, proximity to major metropolitan areas of Chicago and Minneapolis, and direct access to extensive military training airspace in central Wisconsin.

Blume is a notable figure among the coalition of Madisonians opposed to the new aircraft. He is the moderator of the No F-35 Fighter Jets in Madison Facebook page, a forum for residents to discuss and organize their dissent to the F-35. Their objections tend to focus on four central complaints: concerns about the aircraft’s noise, its environmental consequences, objections to militarizing Madison, and skepticism regarding the aircraft’s economic effects on the community.

“Of course, there are others in the community who say, ‘that’s the sound of freedom.’ Well, in this case the sound is painful,” Blume said.

During a community meeting on February 28th, one of the first public forums dedicated to discussing the F-35, proponents and critics of the airport met with city alders and airport officials to voice their perspectives.

Many attendees echoed Blume’s concern for noise issues – citing the noise of F-16 flights as a cause of disturbed sleep, interrupted conversations and distressed children. Especially for residents living under the takeoff and landing flight paths of the jets, they fear the F-35 will exacerbate these noise complaints.

“I’m well aware that the airport is noisy, and I’m willing to live with a certain amount of noise,” Blume said. “But it’s at the point where it’s not comfortable now - and it’s only going to get worse.”

Because of the effects that terrain can have on aircraft acoustics, it’s difficult to say for certain whether the noise generated by the F-35 will be different than the current noise of the F-16. Dennis O’Loughlin, former District 20 Supervisor and a member of the Dane County Airport Commission, stated at the meeting that the F-35 noise level would be “at or below” that of the F-16.

A 2014 study from the Joint Strike Fighter program projects the F-35 noise level to be comparable to the F-16, recording the two aircraft’s noise levels as equal at 145 decibels on the ground, and at 111 and 110 decibels, respectively, upon takeoff. For comparison, the noise of a gas lawn mower recorded at three feet away registers around 100 decibels. Due to operational costs, the F-35 is also anticipated to make greater use of flight simulator programs in its training, which could reduce the frequency of training flights made out of Truax.

Central to the meeting’s discussion was the repeated objection to the military expenditure the F-35 represents. Each aircraft costs around $90 million, and the proposed fleet of 18 F-35A jets amounts to over $1.5 billion in military hardware coming to Madison. Opponents to the aircraft proposed redirecting these funds toward non-military causes, such as infrastructure and education. However, Zach Brandon, president of the Greater Madison Chamber of Commerce, says this argument misunderstands how the federal budget works.

“The planes are going somewhere. If they don’t go to Madison, they’ll go somewhere else. On your federal income tax, it won’t save you anything by stopping it, because if it doesn’t go here, it will go to one of the other four bases. These particular planes have been purchased, and you’re still going to pay for them,” Brandon said.

Brandon represents Together Truax, a group organized by the Greater Madison Chamber of Commerce to support Truax as a base for the F-35. For Brandon, supporting the F-35 is a matter of economic incentive.

A 2015 study by the UW-Extension Center for Community and Economic Development found that Truax’s 115th Fighter Wing generates $100 million of economic activity annually within the state of Wisconsin. The base employs 1,505 employees between the military and civilian sectors, representing a total payroll of $48 million – of which 95% is estimated to remain within the state. Truax Field contracts largely with local businesses for food services, supplies and construction contracting, and the 115th Fighter Wing provides first line fire and EMT-level emergency services for the greater Dane County Regional Airport – a service which the airport values at $1 million annually.

But without the F-35, Brandon is concerned that Madison may lose these benefits. To continue functioning as an Air National Guard installation, Truax Field needs serviceable aircraft to operate. In this regard, the current fleet of F-16s pose a weakness. The F-16, and specifically the variant operated by the 115th Wing, is one of the oldest operating aircraft in the U.S. military inventory, having first deployed in 1978. Due to safety and maintenance concerns, these aircraft are rated for a set number of serviceable flight hours, a limit which the Truax fleet is soon approaching. When the aircraft reach this limit, they will be retired – and without a replacement, Truax Field faces closure.

For proponents of the F-35, acquiring the aircraft is not so much about boosting economic development, but simply maintaining the benefits that Truax Field provides to the community.

“In the event the F-16 leaves, and in the event the F-35 doesn’t come, many millions of dollars of tax money will be needed to supplant the equipment and the people that the Air Force provides 24/7, 365,” O’Loughlin said at the community meeting.

In addition to maintaining the present benefits, the arrival of the F-35 may prompt valuable renovation contracts at Truax. Hangar and maintenance facilities at Truax would need to be upgraded to accommodate the F-35, a construction contract estimated to represent between $20 and $30 million in defense spending. In addition, the basing would prompt the construction of an $11 million flight simulator, an alternative to physical flights that would reduce flight frequency and help reduce the aircraft’s operational costs.

To fully evaluate the local impacts of bringing the F-35 to Madison, the U.S. Air Force will conduct an environmental impact survey of the area, an exhaustive survey that considers many aspects of how the aircraft’s presence may affect the environment it is based in. Existing studies evaluating other bases in the United States represent the product of several years of assessment.

The Air Force plans to release a draft of their environmental impact statement for Madison by 2018, which will be open for comments, revised and finalized by 2019 to be followed by the final decision on whether Truax Field will receive a fleet of F-35s. The survey will accept public comments for consideration, which may be submitted via mail or online through April 6.

On March 8th, Air Force representatives will host a local open house, providing an opportunity for local residents to learn more about the proposed aircraft deployment, as well as a chance to submit comments for the environmental impact survey. The open house will take place between 5 and 8 p.m. at the Crowne Plaza Hotel on East Washington Avenue.