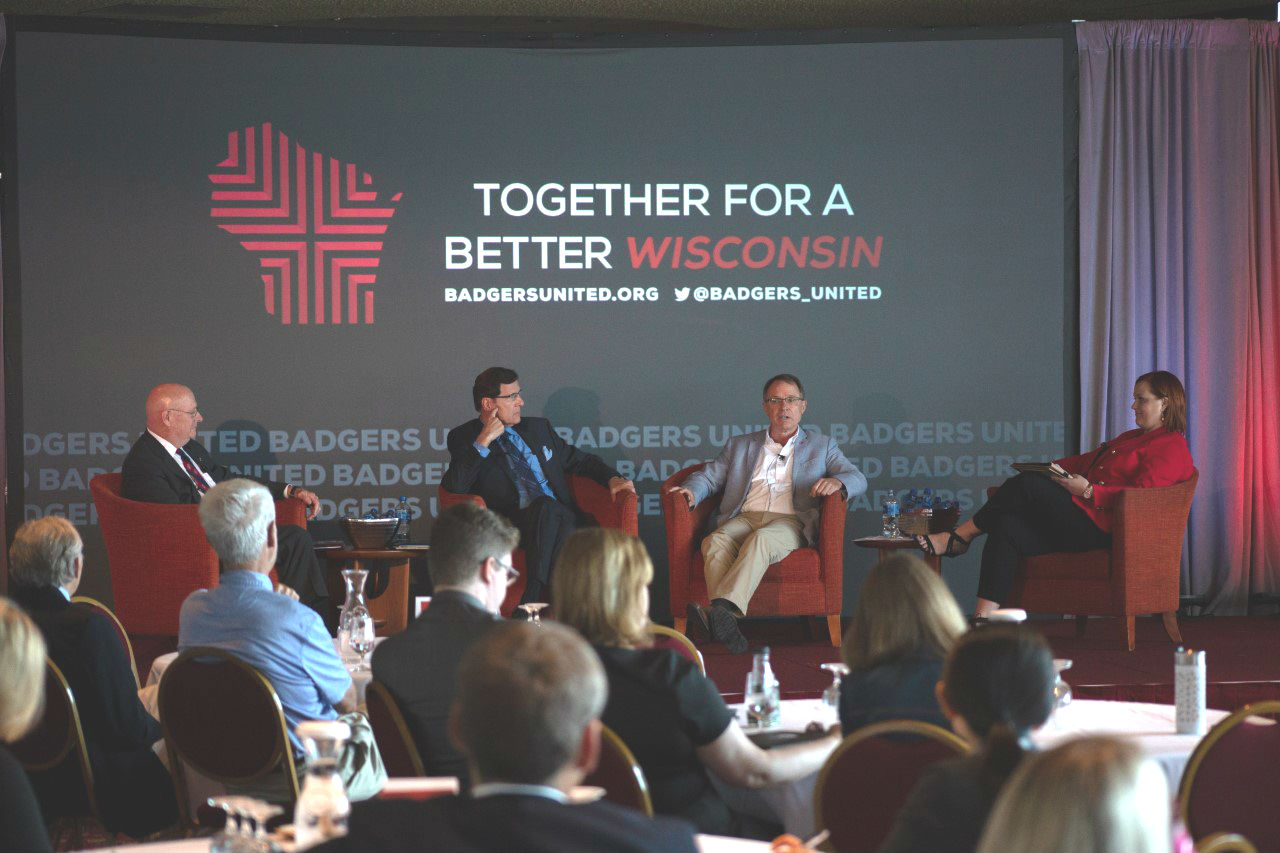 Badgers United, a new nonprofit organization, launched in June to undergird the financial position of the University of Wisconsin’s flagship campus.

“We look forward to sharing information with citizens and stakeholders alike to create a greater understanding of the powerful economic value of UW-Madison and help folks understand the wealth of data out there and what it is telling us to do,” Schroeder said.

Three panelists stressed the organization’s effort to bolster state funding for UW-Madison and took aim at ending the tuition freeze within the UW System.

UW-Madison generates revenue through two main sources, the panelists said: state appropriation and tuition. But the campus is grappling with diminishing resources in recent years.

“State appropriations are almost exactly what they were in dollar terms, ten years ago,” said Knetter. “And in-state graduate tuition has been frozen now for eight years.”

In response, the group is primarily focusing on thawing the tuition freeze.

Rep. Murphy said he drafted a bill years ago for a new tuition setting policy which would limit future tuition increases to the consumer price index. This means a stable yearly increase tied to the inflation rate.

The proposal also endorses “cohort tuition,” a system in which tuition is determined for an individual student when that student first enrolls and stay flat for four years.

“We need some deregulation in tuition setting, so that part of the equation needs to be healthier than today,” said Knetter.

Specifically, this policy hands power on tuition setting to the board of regents, rather than the state legislature, if the undergraduate tuition freeze is lifted.

“We now have an opportunity to transfer the tuition setting policy from the governor back to the board of regents,” said Higgins.

The initiative is trying to carve out a sustainable path for the UW-Madison as recent data signals a flagging economy.

According to a study conducted by the Center on Budget and Policy Priorities, average state spending per student has plumetted by nearly 20 percent between 2008 and 2018.

“In the last 40 years, state support for UW-Madison has gone from 43 percent to 14 percent, ” said Schroeder.

Higher education supporters hailed the election of Democratic Gov. Tony Evers as a moment to to insulate UW campuses from the funding crisis by directing more funding.  Gov. Evers proposed around $50 million more for UW System in the 2019-21 budget proposal in comparison to Gov. Scott Walker’s 2017-2018 budget proposal.

But the slight increase of state funding is not enough to make up for the historical budget holes and the years-long tuition freeze throughout the system.

Badgers United addressed the drop of UW-Madison’s national ranking as a reflection of its past success.

UW-Madison tied for 15th best public universities in the annual report released from U.S. News and World Report magazine, however, ranked 10th in the year of 2016.

“We are one of the greatest universities in the world by many measures, but I would say it is less healthy than we were 10 or 20 years ago,” said Knetter.

Nestled in the genuine talent hub of Wisconsin, the organization has been working behind the scenes on current economic challenges since last fall, Schroeder said. The group’s board of directors is a who’s-who of Wisconsin luminaries, including former Department of Commerce Secretary Cory Nettles, former Major League Baseball Commissioner Bud Selig, major UW donors John and Tashia Morgridge,  longtime Wisconsin Alumni Research Foundation president Carl Gulbrandson, and others.

According to its mission statement,“We’re members of communities like yours who believe a better Wisconsin starts with a stronger UW-Madison.”