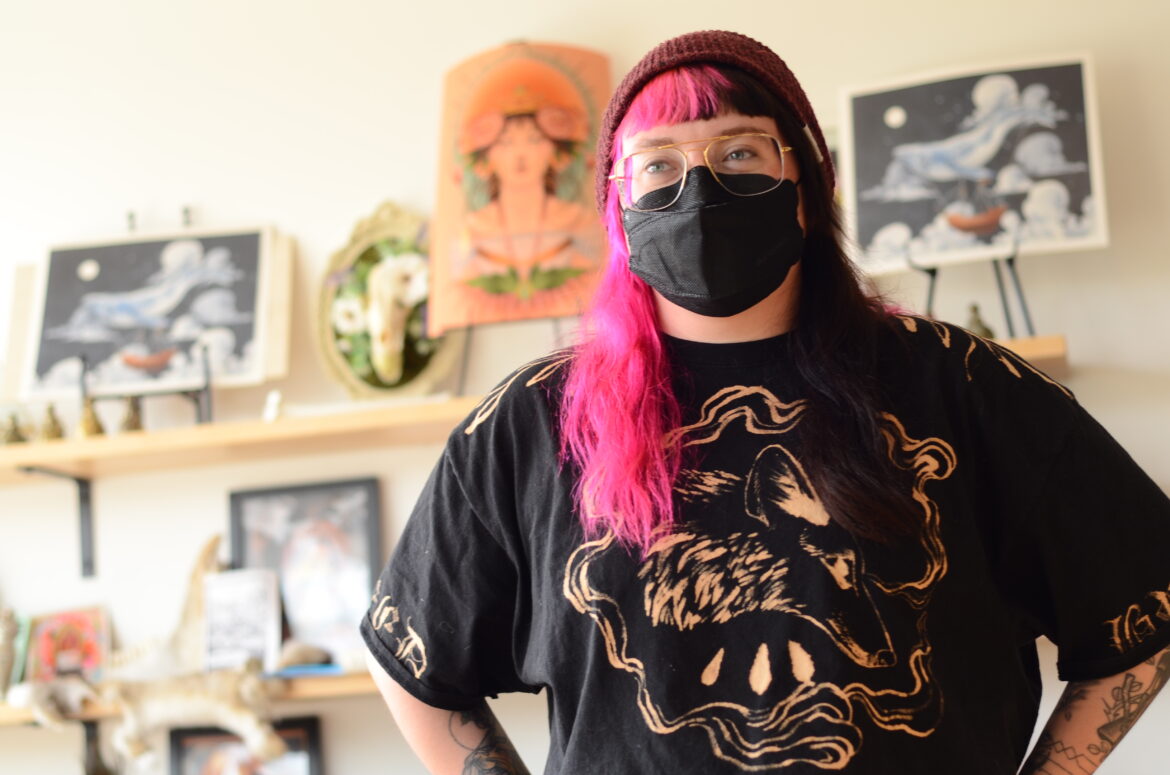 nipinet landsem is the first artist and educator in-residence for the Madison Metropolitan Sewerage District. The position was created this year to foster communication between the district and the Madison community and to bring attention to water, a resource landsem says many take for granted. landsem also co-owns giige, an indigenous and queer-owned tattoo collective in Madison. They are a descendant of the Turtle Mountain Band of Chippewa in North Dakota, an identity which informs their art and activism. landsem has lived in Madison for about six years, having moved here after graduating from Marquette University with a degree in linguistics.

So, I’m gonna go really, really broad with this, and I’m gonna say the biggest challenge that this community and probably the entire world is sort of facing right now is the impacts of settler colonialism. Because that very much so encompasses capitalism, class, racism and the climate crisis. Pretty much all of that stems from settler colonialism and the drive towards quote, unquote, “civilization” from a European standpoint. So, I think that a lot of what we’re doing right now is trying to educate people about that, mitigate its effects in some ways and reverse it if we can, but obviously, that’s very hard.

And so, that’s the macro level. But you can also bring it down to the micro level in that if you’re talking about just the Teejop Madison community, you get people whose families have lived here for a couple generations, who don’t really know anything about the land that they live on, or the other people who live with them. And so, people tend to be very isolated and have a hard time breaking out of that to interact with the larger community. On the micro level, settler colonialism tends to manifest as people not having relationships with each other and the land that they live on.

I wish people understood that not everybody here is white and not everybody here has the same history and relationship to where they live, and their family, and where they come from and all of that, like the concept of money and the concept of community. I feel like I’m always talking about this because on the one hand, you’ve got politicians, people running for office, getting away with being awful racists because they just assume people are going to agree with them. And then on the other hand, you’ve got even smaller communities like Pride in Madison which tends to ignore the presence of Two Spirit people in our community. There’s not really any support. Madison doesn’t even have a native center or anything like that. So, I think just being more aware that this is still a diverse community, even though it seems like most people here are 20- to 30-somethings who are white, upper middle class, working at Epic, right? I wish people wouldn’t homogenize the community and Madison.

My usual answer to this is just land back: give control of the land and the resources back to the original stewards. It was taken without consent, or with trickery. That doesn’t mean everybody has to leave. It just means that the people who know this land best will be in charge of managing it. I feel like that relates to water. That relates to land use. That relates to community politics.

Honestly, talking to the young people here really gives me hope. And I know that I kind of am a young person. I’m not that old, but I come in contact with a lot of youth. There’s a lot of college students getting tattoos and stuff. I have a lot of conversations with people who are in their early 20s and listening to them talk about what’s important to them and what they want to change and what they’re already doing, really gives me a lot of hope. The kids are alright, is how I feel. There’s a lot of people in this community who are really young and kind of coming into their power and their hearts are in the right place. I think that’s really good to see.