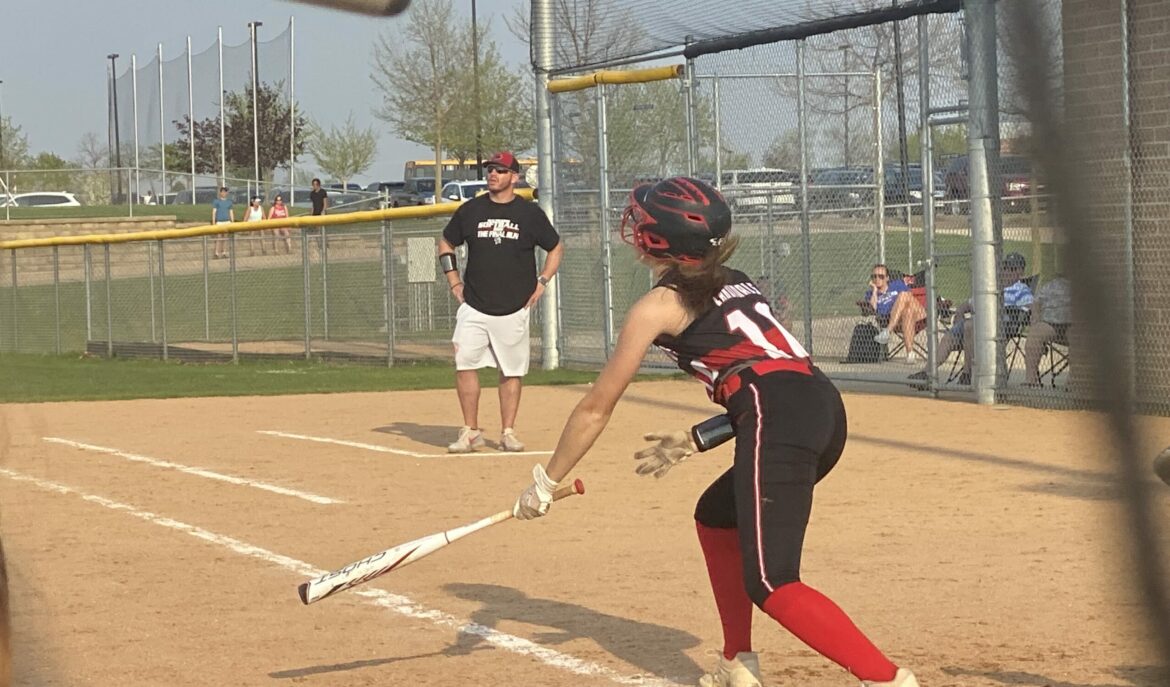 Taylor Baker strikes out 12 in  rout of Janesville Parker

Sun Prairie Softball clinched the Big Eight title outright Thursday night with a 9-0 win over Janesville Parker on senior night. Last year the Cardinals tied with Verona to share the conference title, and last won it outright in 2018.

The Cardinals continued their perfect conference record, now 16-0 with two games left at Madison Memorial and Middleton. Thursday’s win over Parker completed Sun Prairie’s season sweep of the Vikings, previously beating them 10-0 at the start of May.

“Just one step at a time. That’s all it is,” Sun Prairie coach Jamie Olson said. “We have to take one step, one game and focus on that.”

Sun Prairie received another great performance from sophomore Tayler Baker. Baker pitched a gem of a game, striking batters out 12 times in six innings, while only giving up two walks and one hit. She also contributed at the plate, going 3 for 4. The only out came when Parker’s right fielder Karlie Zimmermann made a diving play to save a base hit.

Parker’s only hit of the game came in the top of the fourth inning. Junior Nariyah Lot bunted the first pitch she saw. The Cardinals’ defense left the ball alone in hopes of it rolling foul, but it stayed fair.

“[Baker] threw a lot of good changeups for strike threes and got the batters off balance so they couldn’t hit,” said Sun Prairie senior Chloe Knoernschild. “Taylor is really an amazing pitcher. I love catching for her.”

After Baker’s day was over, sophomore McKenna Gross came in to finish the game off, recording the final three outs in the top of the seventh inning.

“Just the fact that I’ve been able to use [Baker], [Isabel Royle], and McKenna Gross, that just shows you the depth we have within our team,” Olson said. “I can put them in whenever needed and that shows how tough we are.”

Sun Prairie scored eight of its nine runs in the first two innings, giving Baker a great lead to work with. Eight of Sun Prairie’s 10 hitters got a hit, but junior Isabel Royle stood out. Royle finished the game with a double, a triple and three RBIs in three plate appearances.

“I’ve been going through a bunch of ups and downs at the plate,” Royle said. “Tonight, I just let the ball get deep on my hands and I put a bat on it.”

Thursday’s game was one of the hottest of the year, with temperatures reaching over 90 degrees, making it more difficult for pitchers and catchers to perform.

“It definitely was the hottest,” Knoernschild said. “I had to dump some water on the back of my neck to keep me cool. That helped and just taking some deep breaths really helped to keep me cool and keep me focused even in the heat.”

Sun Prairie will face Kenosha Bradford at home on Monday to begin the final week of the regular season. Janesville Parker plays three games in the next two days, facing Madison Memorial Friday night before a double header against Madison East on Saturday.