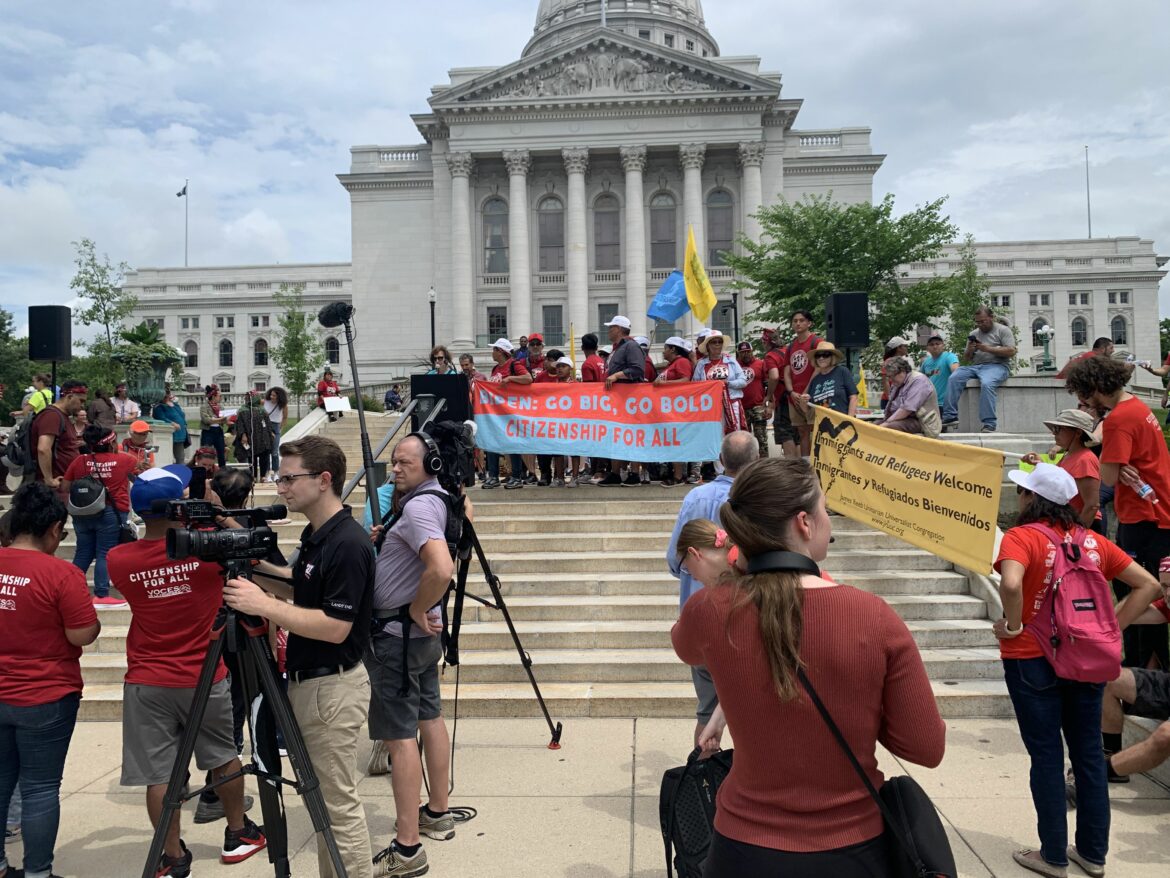 The Dane County and Madison area is often considered a progressive’s paradise, where communities join hands to generate an inclusive environment for all. But for Latino immigrants, that’s not always the case. Blatant racism, the general population’s lack of knowledge about immigration, financial insecurity and scarcity of legal resources make Dane County quite the opposite for some in one of the county’s most vulnerable people, according to activists and experts.

When Stephanie Janeth Salgado Altamirano came from Honduras with her family in 2015, her family had two residential options: Wisconsin or South Carolina. Altamirano remembers advocating for Wisconsin because she was afraid of “what could happen to my family after hearing stories about the American South.”

Unfortunately, she came to learn racism isn’t unique to the South. Upon her arrival in Madison, Altamirano said her public school placed her in its English as a Second Language (ESL) program without testing, which she found “weird.” Weirder yet is that Altamirano met multiple Latino students who she said were born in America and spoke English well. “I’d ask them, why are you in ESL?” Altamirano said.“They’d say ‘I don’t know.’”

Altamirano said her experiences as an immigrant propelled her to advocate for people of color and other immigrants. Since high school, she’s shared her immigration and naturalization story. “Storytelling is such a powerful way because through stories, people are able to relate [and] be empathetic,” Altamirano said.

But her activism comes at a cost. Altamirano recalled a Zoom event she was asked to attend by a book club reading ‘Enrique’s Journey.’ In the middle of speaking, “Zoom bombers” crashed the call, hurling slurs her way and sexually harassing her. Most vividly she remembered hearing the words, “You belong in a cage.”

“It made me think about all the people at the border,” Altamirano said. “It made me appreciate how privileged I am to be here.”

But blatant bigotry isn’t at the root of all the problems immigrants face, said Larissa Joanna — the daughter of a formerly undocumented family and an activist with Voces de la Frontera advocating for Wisconsin’s undocumented community. Another burden immigrants bear is the general population’s lack of knowledge about why many Latino families have to migrate without legal documentation, she said.

“Why would someone choose to leave ... what they’ve known their whole life,” she said, to “come here to live everyday in constant fear [of being deported]?”

Fabiola Hamdan, an immigration affairs supervisor for the Dane County Department of Human Services agreed. For people to leave their home country and everything behind, “something really bad” has to be going on, she said.

Undocumented people don’t reap most of the benefits their taxes pay for. In 2016, residents of Dane County born outside the U.S. contributed $3.4 billion to the county’s GDP and paid $124 million in state and local taxes.

Despite this, immigrants are deliberately targeted and acutely affected by accusations of widespread voter fraud. Over the past two years, politicians across the country touted claims of voter fraud in the 2020 presidential election, including Wisconsin elected officials.'

At the rally, Brandtjen told the crowd “You’re not crazy,” for embracing the notion that the 2020 election was stolen from Donald Trump.

Two studies done at the University of Missouri-St. Louis found resentment toward immigrants is strongly associated with beliefs of widespread voter fraud. Even though the targeting is deliberate, the language of voter fraud is coded, meaning many people who don’t do explicitly racist things can fall victim to the agenda.

Attorney Richard Saks — a board member for Voces de la Frontera — said he believes Gableman issued the subpoena because of the group’s “role in mobilizing Latino voters in Wisconsin.” The group filed a lawsuit against Gableman in response to the subpoena, which he then rescinded. As for the financial barriers immigrants face, some local groups are providing help.

The Community Immigration and Law Center for Madison and Dane County provides free legal services to immigrants who are living at 300% below the federal poverty line.

Aissa Olivarez, an attorney who works for the law center said although it gets most of its funds locally, its financial resources are diminishing as it works to provide legal services partly because public focus on immigration issues has faded since attacks on immigrants aren’t as public as they were during the Trump administration.

“People don’t see this as a continued issue, like we do as attorneys who have boots on the ground doing this work,” Olivarez said.

Olivarez said many Dane County residents don’t know about the process people go through when they’re at risk of deportation. In removal proceedings, immigrants have the right to counsel but not to a public defender. Immigrants also must attend multiple court sessions, which mostly take place in Chicago.

During the pandemic, undocumented immigrants were especialy affected by the closing of service industries like cleaning and maintenance, restaurants and construction, Hamdan said, all sectors of which undocumented workers are overrepresented.

Over 70% of U.S. adults said immigrants do the work most citizens do not want to do, according to a 2019 Pew Research Center survey. But another poll by Pew found less than 40% of those same Americans felt the government should help the undocumented immigrants who have been financially burdened by the pandemic.

It’s worth noting that if the undocumented workers became citizens, their contributions to society would increase the national GDP, research shows. This is partly because there is a wage penalty that comes with having undocumented status in the labor market— people can pay undocumented workers less because of their circumstances. But a pathway to citizenship could change that.

UnitedWay Dane County’s Immigration and Refugee Taskforce pinpointed three areas that are key barriers to the immigrant community’s progression and how to combat them. They include: a lack of strategic community engagement with policymakers and by law enforcement in neighborhoods, a lack of organizational capacity around diversity and inclusion and a need for broad community action surrounding the most pressing needs of immigrants and refugees.

Joanna said it is critical that Dane County residents who aren’t immigrants are “doing the work and helping at any capacity in person or virtually [and] demanding changes and human rights for refugees, dreamers and undocumented folks.”

Altamirano said though it’s essential to focus on the most salient issues affecting immigrants adversely, it’s equally important for people participating in humanitarian discourse to keep in mind that undocumented Latino immigrants are more than just victims.

“Undocumented people can be happy and find happiness. It’s not all fear,” Altamirano said.