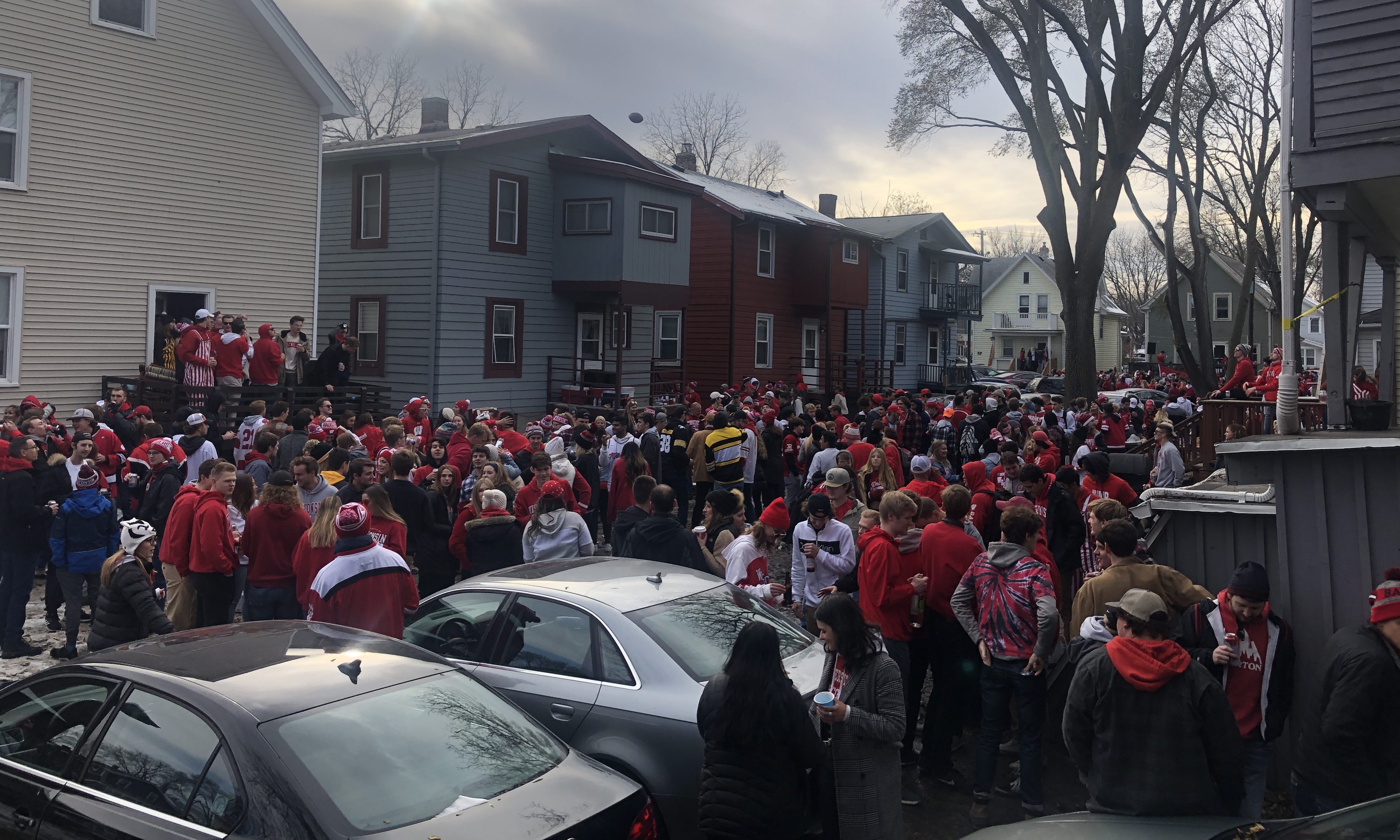 Community members in the neighborhoods surrounding Camp Randall Stadium expressed concern to Madison city officials last month regarding the presence of beer gardens and binge drinking on Badger game days, as they said it disrupts their lives.

Residents that live near Regent Street and Monroe Street often have to deal with the unpleasant effects of binge drinking on game days, including “people urinating in their lawns, vomiting in their alleyways, or even knocking over garbage cans,” said Alder Tag Evers, who represents the neighborhood on the Madison Common Council.

Evers attended the Alcohol License Review Committee’s meeting on October 16 with residents John Perkins and Josh Napravnik to raise concern and ask the committee for advice regarding the disturbances that occur on game days. John Perkins is a member of the Greenbush Neighborhood Association, and Josh Napravnik is a member of the Dudgeon Monroe Neighborhood Association.

Evers said residents specifically began to express concerns after Pizza Extreme on Monroe Street applied to extend their liquor license to sell hard liquor, though the establishment already possesses the license for a beer garden.

“You just feel like, how much is too much?” Alder Evers said in an interview. “These aren’t people who are against people having fun, but how do you balance the legitimate concerns of a business trying to be competitive and make money with the impact of residents who live close to these establishments?”

John Perkins echoed this, as he said, “There are a number of factors that make a particular establishment viable from a business standpoint, one of which is [having] enough traffic…and the places closer to the stadium are going to have more foot traffic on football Saturdays.”

Committee Member Michael Donnelly said at the October 16 meeting that there are two ways to approach these problems: proactively and reactively, proactively being before an establishment obtains a liquor license, and reactively being after they have already obtained one. “It is far easier to do things proactively than reactively,” Donnelly said at the meeting. “Once somebody has a liquor license, they have a property interest in that and anything we want to do to remove it or even restrict it is challenging”.

As a contact person for the Greenbush Neighborhood Association, John Perkins said that he mostly gets complaints about crowds after the football games on Saturdays, but it’s difficult to tell where the problem is originating from, as there are so many people in the area on game days.

Furthermore, Perkins said that the layout of the Greenbush neighborhood likely affects the types of complaints he receives. “The way the neighborhood is laid out, the first couple blocks off of Regent Street are primarily student rentals, and…for whatever reason, we tend to not hear from the student tenants that [live] there,” Perkins said.

In regard to this year’s football season, Perkins expressed that he was thankful there have not been many night games, since fans usually stick around the neighborhood long after the game is over. This means fans roam the neighborhood very late after night games, Perkins said, which can lead to more complaints.

“When the games start in the afternoon, if [fans are] a little loud during the dinner hour, for the most part people can tune it out,” Perkins explained. “They can still go to bed and not be disrupted.”

At the October 16 meeting, Alder Evers asked the committee if there is any way to cap the number of liquor licenses in a given area. Committee Chairman Tom Landgraf responded, “The city has caps [on the number of liquor licenses] that are established by the legislature that we can’t issue licenses past a certain number, and we’re very close to that”.

The meeting also took place two days before the release of the alcohol density report, which was conducted by the Madison Finance Department and Madison & Dane County Public Health Department.  The study was set up in January of 2018, after previous Madison Mayor Paul Soglin introduced a proposal to limit the number of new liquor licenses in downtown Madison. Though that proposal did not pass, it led the Common Council to propose the study be conducted to analyze alcohol density and its relationship with calls for service.

The study showed that as the number of places which sell alcohol increases, so does the number of calls for police services and building inspection services. This creates greater financial costs for both, with most of the costs burdening the police department.

“I can’t say I’m very surprised,” John Perkins said in response to the study. “We’ve heard for years about how the density of liquor licenses on State Street has been a strain on police resources.”

Almost one month after the release of the alcohol density study, three City Council members just proposed expanding and making permanent the Alcohol Overlay District, which bans any new bars or liquor stores from opening in a restricted part of downtown Madison. Alders Mike Verveer, Patrick Heck and Sally Rohrer called for the district to be expanded from four blocks to nine blocks, so that the district would be bordered by Langdon Street to the north, and North Henry Street and West Johnson Street to the east.

On Regent Street, however, no such Alcohol Overlay District exists. Therefore, as John Perkins said, much of the issues come down to determining which operators are responsible and which are not. “[For] any operator that were to come in and try to open a new establishment, I think we would definitely pay attention to whether or not they had a previous location in town, [as it helps] to get some idea of their track record and the type of clientele that they’re attracting,” Perkins said.

Evers said that going forward, he also plans to approach each new request for a liquor license with more caution in order to address the concerns of his residents. As Evers said, residents should “be able to put their kids to sleep at 8 o’clock and not suddenly have a bunch of noise right outside their home because it’s three, four blocks away from Camp Randall.”