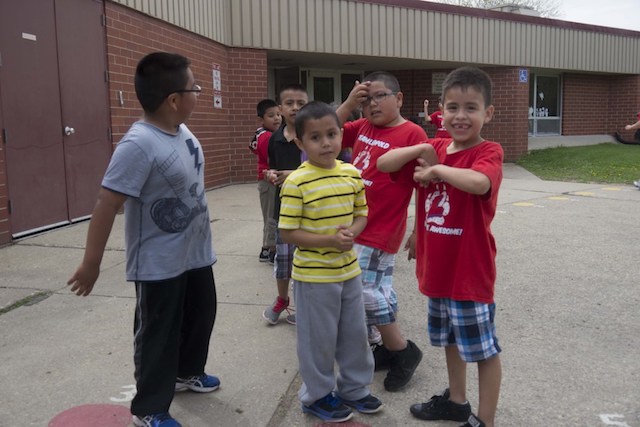 The student body at Leopold Elementary School is one of the most diverse in the Madison Metropolitan School District, and the Leopold PFO is committed to serving the school in its full diversity by working to include parents and families of all backgrounds in the conversation.

The Leopold PFO is designed to support connections between children at school and to  parents at home, as well as making Leopold healthy environment for staff and students, co-president Lee Hayes said. This goal includes a wide range of action, from typical fundraising efforts, to facilitating out-of-school academic support for students, to renovating the staff lounge.

“[By participating] we can really have an active impact on so many kids’ lives,” Hayes said.

Perhaps the most crucial aspect  of the work done by the Leopold PFO is through h encouraging inclusivity and engagement with all families. The sheer size of Leopold Elementary—serving between 700 and 800 students lends to a unique energy within the school that makes people want to engage, Hayes said.

Hayes was elected to the school board as treasurer after two and a half years of serving on the community school committee, which  influenced her priorities as a school board president.

“[The community school committee] really opened up my eyes to all the ways we can reach out to this diverse student body,” Hayes said.

The community school committee established three core needs to address in Leopold—academic support for students of color, out-of-school time and creating positions of power for people of color in the school district.

In the future, the Leopold PFO hopes to create an equity and inclusion committee within the board that meets to specifically discuss these issues, Hayes said.

When Hayes stepped into co-president role, she noticed the board was primarily white, even though only 23 percent of the student body was white. While she hopes people of color will fill vacant spots in the board during the next election, Hayes wants to ensure the PFO board is engaging with Leopold’s families of color in the meantime.

“[The PFO board] is really trying for direct outreach, so people feel directly involved,” Hayes said. “We want to start a chain of positive interpersonal connection.”

In an effort to connect with a wider Leopold population, Hayes reached out to staff at Leopold, including Graciela Laguna, a Spanish Bilingual Resource Specialist, and Linda Johnson, parent liaison, asking if they could connect her to parents they know.

One way of accomplishing this is through greater inclusion of all parents at board meetings.

This year, the Leopold PFO has two board co-presidents—Hayes, who speaks English, and Rosario Ramirez, who speaks Spanish, in an effort to be more inclusive toward Leopold’s Spanish-speaking and bilingual families. Now, every other board meeting will alternate between Spanish and English.

Meetings will also have free childcare and food as a way of capturing Leopold’s position as a community school and another way to make meetings more welcoming and accessible. Hayes calls them “community dinners.”

So far, attendance has been strong, but is a work in progress. The typical PFO meeting was attended by around a dozen adults and a couple kids, but the first meeting of this year hosted around 40 adults and 25 kids, Hayes said.

“It’s just been incredible,” Hayes said. “I hope by the end of this year, we grow out of this space in the library.”

The Leopold PFO board has two main fundraising events per year—the Fall Fiesta and the Timberwolf Trample in the spring, which brings in over 50 percent of the operating budget.

“Having strong, [established] fundraising events really lets us dig in and focus more on family involvement and inclusion,” Hayes said.