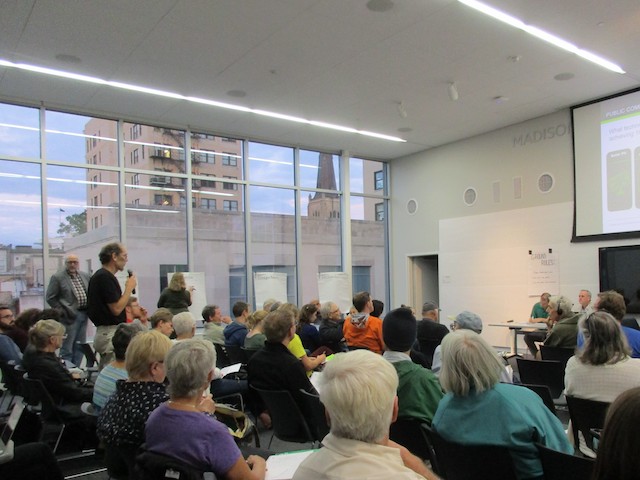 The Sustainable Madison Committee met on September 27 to gather public comments for a renewable energy and zero emission plan for the Madison area.

The meeting took place on Central Library’s third floor at 6 p.m. in order to promote the project and begin taking public comments in-person.

Sustainable Madison Committee chair Raj Shukla gave opening remarks for the meeting, titled “What Does A 100% Renewable Energy Madison Look Like To You?” which also featured a presentation from WKOW-TV meteorologist Bob Lindmeier on the effects of climate change.

The Madison Common Council voted unanimously to work towards a comprehensive plan for 100 percent renewable energy and eliminating carbon emissions earlier this year. A plan and timeline for Madison’s steps toward these goals is due by January 18, which the city allocated $250,000 for developing in March.

Currently the Sustainable Madison Committee’s agenda provides an information gathering and analysis period until November and planning an implementation timeline from October until February.

The committee is accepting public comments on their website until November 17.