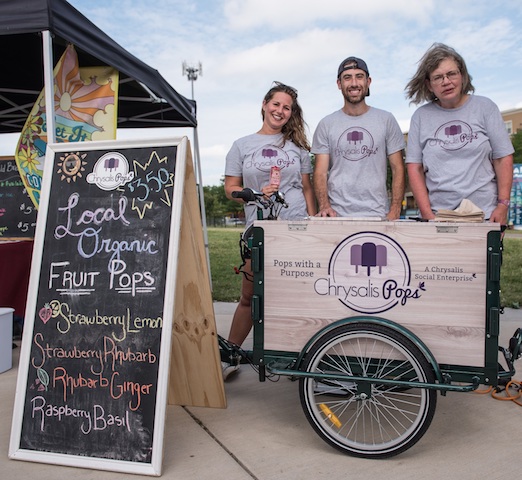 For a six-month season, Chrysalis Pops employees sell popsicles out of the Icicle Tricycle—a tricycle cooler—at local farmer’s markets and community events alongside the program’s slogan: “Pops with a purpose.”

At the core of the Chrysalis Pops program is its mission to weaken the stigma around mental illness. Pops is a vehicle for integrating individuals with mental illnesses into the community’s workforce, lessening the stigma by putting a face to mental health struggles.  The “Pops with a purpose” slogan often prompts a conversation, Chrysalis Executive Director Dani Rischall said.

“I think often what the community sees about mental illness is in the news and not in a positive light, which perpetuates stigma,” Rischall said. “If you’re able to have a conversation with somebody and it’s positive and you’re eating a fruit Pop, and it’s all an enjoyable experience, that will help shift people’s perception of someone with a mental health issue.”

Chrysalis Pops, now in its second season, aims to provide its employees with enough experience to help them land competitive jobs, such as positions in a restaurant or grocery store that anyone can apply for. The program targets individuals who have an interest in working, but also have a long history of unemployment because of barriers such as self-doubt, Rischall said.

Job skills that many employees struggle with the most at first, such as being comfortable speaking to customers, working with others and showing up on time, are important stepping stones to gaining other competitive positions once the Pops season is over, operations manager Max Licker said.

“It’s been a success meeting our employment goals,” Rischall said. “Also, just the skills people gained outside of being able to move onto competitive employment. We saw a lot of people gain confidence and address different issues going on in their life since they had employment. We definitely saw we had a stronger community presence."

The program has its own popsicle-specific challenges—employees learn how to make the Pops from all-local ingredients and practice making a consistent product, Licker said.

“Many people have no experience in the kitchen,” Licker said. “[A task such as] juicing a lemon is not easy for everybody.”

Outside the kitchen, employees get to practice skills that are much less tangible—how to have conversations with customers, learning to be flexible and how to work with many different people, Rischall said.

Although these communication skills are important, they can be difficult at first to employees that are not typically verbal, Licker said.

“A lot of selling Pops is talking, and smiling and saying hi to every person that walks by. Some people are very shy, so that’s a challenge for them,” Licker said.

Mark Carey, a Chrysalis Pops employee, spends his sales shifts greeting customers, taking orders and making change among other responsibilities. The program helped him develop customer service skills, according to Carey’s employment specialist Hilleary Reinhardt.Carey was initially hesitant to call out to people passing by, Reinhardt said. As time went on, Carey became more comfortable greeting people and helping customers pick out a flavor of popsicle.

“In the beginning, Mark and I worked as a team to sell the popsicles, but now Mark takes the lead role and I stand in the back,” Reinhardt said.

Carey’s seasonal position with Chrysalis Pops bolsters his resume, and once the season ends the experiences he has gained this summer will help him find another competitive position, Reinhardt said.

Despite initial difficulties, Carey said his experiences with Chrysalis Pops have been positive and he loves communicating with people.

“[Working] makes you feel worthwhile,” Carey said. “Like you have a meaning in life.”

Watching employees master these skills and becoming more talkative, comfortable and independent is the most rewarding part of the program, Licker said.

“It’s amazing to see how excited people are to work,” Licker said. “[At the beginning] People are really tentative and unsure, because this is a really big step in their lives. [Now] you can really see people excited about what they’re doing. One employee says they even have dreams about selling Pops.”