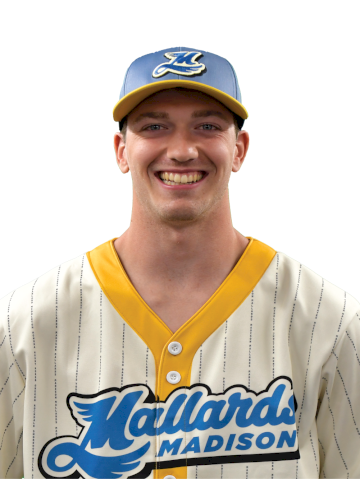 Baldino said it was just a matter of time until the squad, which has won five of their last six, came together.

“We’ve been playing good team baseball even when we were losing,” Baldino said. “Eventually stuff will click, and it’s starting to right now.”

Baldino got run over in the first by Kingfish designated hitter Cam Redding’s RBI double into left field, but he then quickly slammed the brakes on Kenosha’s offense. Baldino stayed true to his mechanics, giving up only four hits to go along with five punchouts and four runners stranded. Baldino said that he and new Mallards catcher Julio Cortez, who arrived Sunday night, are in sync despite barely knowing each other.

“I haven’t talked to him much,” Baldino said. “We work really well together. He’s a good catcher.”

In the bottom of the first, the Mallards’ bats revved up almost immediately after center fielder Alex Iadisernia lifted a two-run homer into left field off Kingfish starter Trent Turzenski to retake the lead 2-1. The team’s home run leader said his blast inspired the rest of the team.

“It’s always great...to get the team back going when you answer right back. It gets everybody excited in the dugout,” Iadisernia said. “Hitting’s contagious, so everybody started hitting after that.”

Turzenski swerved further off track in the third with a wild pitch that sent Mallards left fielder Matthew Scannell home from third and pushed the Madison lead to 3-1. Kenosha catcher Kirk Liebert drilled a triple into center field in the seventh off reliever Kyle Subers, then scored on an errant relay throw to cut the deficit in half, but Mallards reliever Jared Fong stepped up  to close the door. Fong defused a bases-loaded, no-out jam later in the seventh en route to the 3-2 win.

Fong said his time at Washington University at St. Louis prepared him for the tense scenario.

“Definitely a lot of pressure in that situation,” Fong said. “Just having years of experience in those kind of pressureful moments, I’ve really figured out how to control myself and control my breathing to where I get to the point where I know what pitch I want to throw in...that spot.”