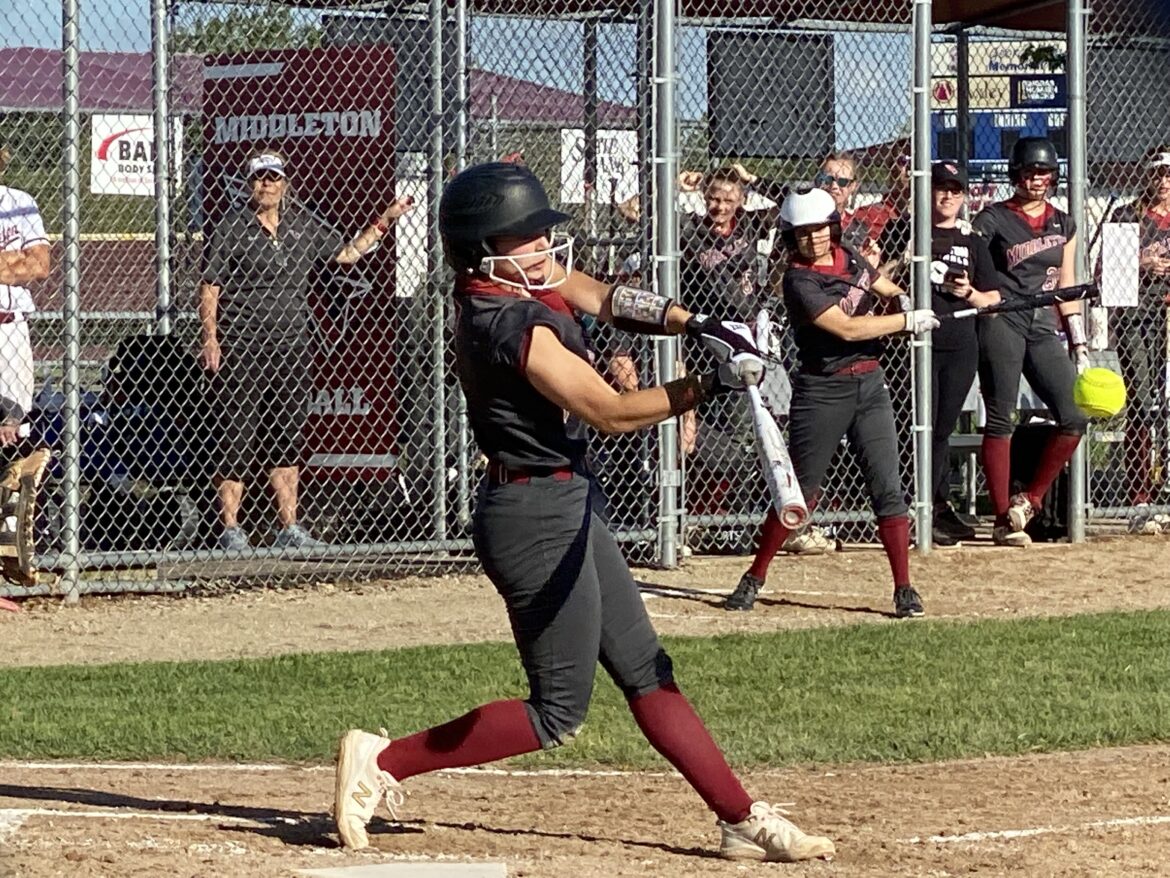 Timely runs push Cardinals past Wildcats in a thriller

MIDDLETON, Wis. – No. 6 Middleton upset No. 3 Verona to win to advance to sectionals for the first time since 2015.

Middleton defeated Verona 4-3 Friday night in a rematch of last year’s regional final between the Cardinals and Wildcats. Verona was the home team and the higher seed, but the game was held at Middleton’s home field at Firefighters Memorial Park due to field conditions after a rainout the previous night. The two teams split the series in the regular season, both winning on their home field.

“This was a gritty team win,” Middleton coach Brittany Carl said. “I’ve been saying, ‘This is our rubber match. This really decides the better team this year.’”

Both teams came ready to play, scoring in the first inning. Middleton however, kept up the pace, getting to Verona’s ace junior Hilary Blomberg with runs in the second and third inning as well.

“I think [Blomberg] probably is battling,” Verona coach Todd Anderson said. “It’s the end of the season, so there is a lot of wear and tear, but we thought our best chances were with her in the circle.”

Blomberg pitched the entire game for the Wildcats, striking out batters six times, but also giving up nine hits, including two doubles to the fence. She at times seemed to be fighting her body and some discomfort, throwing for a total of 107 pitches. Runners got on base every inning except the top of the sixth, where Blomberg struck out the side.

Verona came back to tie the game at 3-3 in the bottom of the sixth inning. Verona junior Ellie Osting started the inning off with a base hit up the middle, followed by senior Jana Lawrence who reached first base on an error from Middleton senior Jenna Redders’ throwing error. Both runners would score on the following play due to a throwing error by Middleton first baseman Anna Zanton.

Zanton and freshman Cora Thomas are both junior varsity call ups who started the game for the Cardinals. Zanton stepped in for freshman Grace O’Connor, who had a last-minute injury before the game.

The top of the seventh inning began with Middleton senior Erin Schleusner reaching base after being grazed by a pitch and Redders singling over the shortstop’s head. The next hitter laid down a bunt to move both runners into scoring position, before sophomore Mackenzie Zimmerman hit in the winning run with a swinging bunt.

After the run scored, Verona’s defense held tight, throwing both Redders and Zimmerman out at home plate to finish the inning and not allow another run to score. It was up to Middleton freshman Megan Button to shut the Wildcats down and keep the score 4-3 with the top of Verona’s lineup hitting in the bottom of the seventh inning.

Button struck out Verona’s leadoff hitter to begin the seventh inning. Middleton’s first baseman and second baseman took care of the rest, recording the final two to pull off the upset. Button finished the day with five strikeouts while only giving up six hits and one earned run on 83 pitches.

“I have not been in that position before,” Button said. “I just took a really calm approach. Don’t overthink it, and let your body do what you’ve been working so hard to do.”

Verona’s top hitter on the night was Lawrence, who was 2 for 3 from the plate and scored a run. Lawrence and center fielder Odalys Rivera are the only two seniors who will graduate from Verona.

This is the first time the senior class for Middleton has made it past the regional finals in the tournament.

“For the whole senior class this was a big game for us to get hardware, because we have never gotten it before,” Redders said. “We wanted to get the hardware so everyone could see that we’re a great team. To me it just means getting to the next round, getting an extra game, which as a senior is all you can ask for.”

Middleton will travel to No. 2 Monona Grove on Tuesday to play in the sectional semifinals.

“Our energy needs to stay up,” Zimmerman said. “Being able to play with these seniors, keeping going, it’s huge for us. Going off of a win against a good team especially like Verona is plenty to keep our energy.”