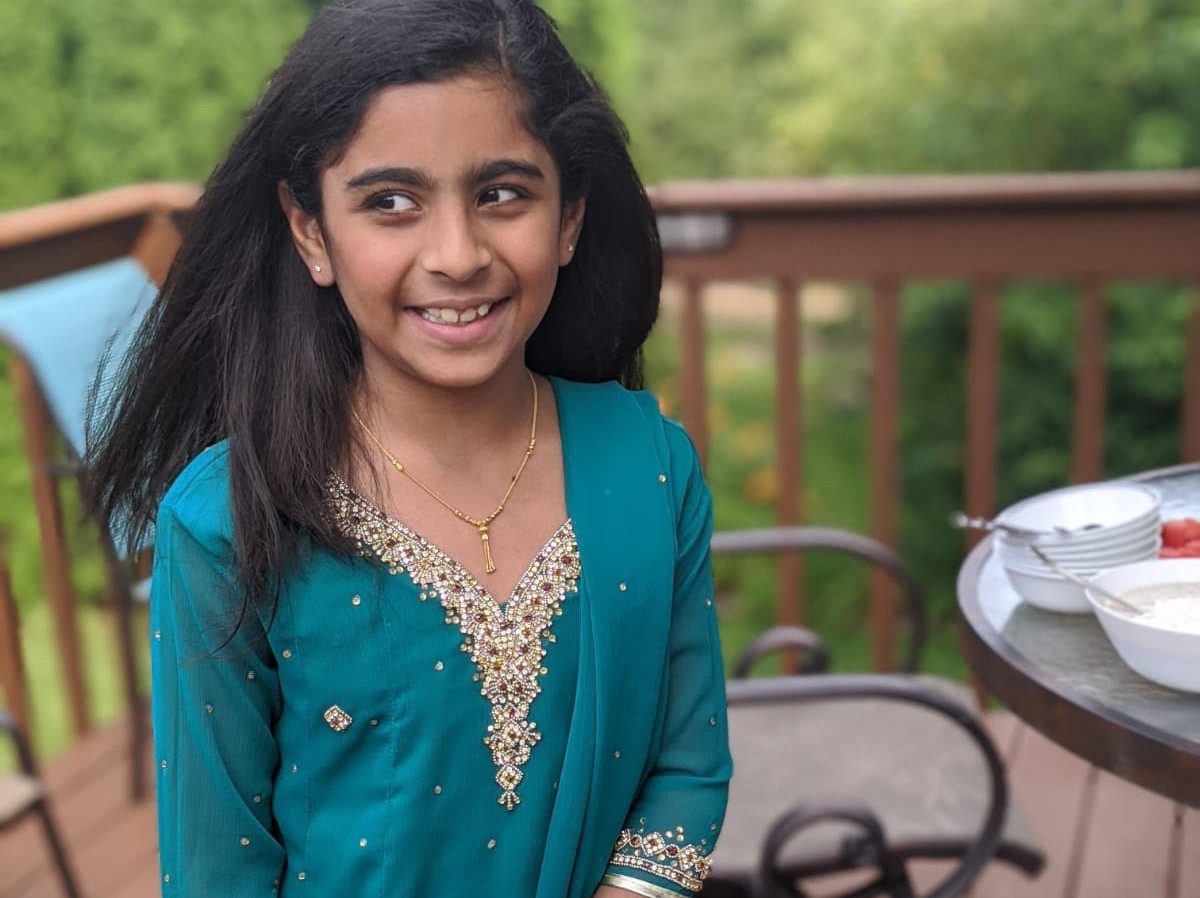 Dressed in colorful traditional attire, 9-year-old Norah Baloch was constantly looking at her hands, decorated with Henna, on the back porch of her house on the west side of Madison. However, she was apparently not happy with the way she was celebrating Eid, one of the most important festivals of the Islamic calendar.

“I can’t invite my friends or visit them. Last Eid was better than this one,” Norah said. Norah said she couldn’t visit her cousins in Chicago, a family norm she used to do every Eid. She spent her Eid with her parents and siblings. For Muslim kids Eid is huge, said Norah’s father, Dr. Imran Baloch. Norah also noted that one of the important traditions is for kids to receive gifts of money from their elders.

“I didn’t get enough money this time. I pray and hope next Eid would be better and we are allowed to hang out with our friends and family members,” Norah said.

Muslim families in Madison, like elsewhere in the world, celebrated Eid ul-Adha on Friday without performing its key rituals and traditions—prayer in congregation, meeting and greeting people in person, asking for forgiveness, visiting families and friends.

Every year, one of Madison’s three Islamic centers holds a congregation for Eid prayer in the city and roughly 3,000 people show up to prayer. There are three Islamic centers in Madison: the Islamic Center of Madison,  Islamic Center of East Madison, and Masjid Us-Sunnah. Muslims in Madison have migrated from different parts of the world and belong to different ethnic groups and races. All three Islamic centers simultaneously organize a single congregation for Eid and each mosque gets its turn to host the congregation. Every year, there are two big gatherings, one for Eid-ul-Fitr, which happens after the Muslim holy month of Ramadan at the end of May, and Eid al-Adha, which occurs after two months and roughly ten days of Eid-ul-Fitr, depending on the lunar calendar. This year Islamic center of Madison downtown was responsible for the Eid al-Adha gathering, but due to pandemic, it didn’t happen.

Eid al-Adha marks the annual Hajj pilgrimage of Mecca in Saudi Arabia and it commemorates the story in the Muslim holy book Quran in which Ibrahim, also known as Abraham, was commanded by God to sacrifice his son as an act of obedience. However, when Ibrahim was to sacrifice his son, God stopped his hands and replaced his son with a sheep.

A version of the story appeared in the Book of Genesis in the Old Testament and in the Torah.

Since then every year this time of the Islamic calendar depending on the sighting of the new moon, Muslim families slaughter an animal — a sheep, cow, bull, goat, or camel. The meats are distributed among family, neighbors, and the poor. Muslims also gather with friends and family.

“I have been living in Madison since 1984 and I never dreamed of the Eid without a congregation,” said 62-year-old Dr. Ibrahim Saeed, the president of the Islamic Center of Madison who otherwise would have led a congregation of around 3,000 people in Madison on Friday. “This is the time we are excited to hug, shake hands, and greet each other and ask for forgiveness,” he said.

Mustafa Musab, a young immigrant here in Madison who has recently graduated from UW-Madison, said it didn’t feel like any Eid from previous years.

“I find Eid prayer to be the most important thing and it makes it feel like Eid,” he said.

Dr. Ibrahim said health and safety are the first priorities for the organizers.

“People and especially kids are very excited during the time of Eid. They want to wear new clothes, jewelry, hang out with their friends and families and enjoy the festivity,” he said.

Somali American Mohamud Ali, 26, is a member of Us-Sunnah Mosque on Madison’s west side. He moved to the United States in 2009 and has been attending Mosque ever since. “It’s the saddest time to have Eid,” Mohamud said.

The Eid in a city like Madison is different than any Muslim majority country of the world because it is an opportunity for the members of the Muslim community to meet people and share their feelings among people of their own faith. Mosques in Madison are unlike those in the biggest cities of the United States or other western countries, as the mosques are frequented by all sects within the Islam religion.

Dr. Salman Mushtaq, a former researcher at UW-Madison, has said he has been away from his family since 2013 and this time of the year he misses his family a lot.

“The Eid congregation provides an opportunity to meet people and share our feelings. We can’t see each other in person and experience it together,” he said.

The Islamic Center of Madison has requested another opportunity to organize the Eid prayer next year.