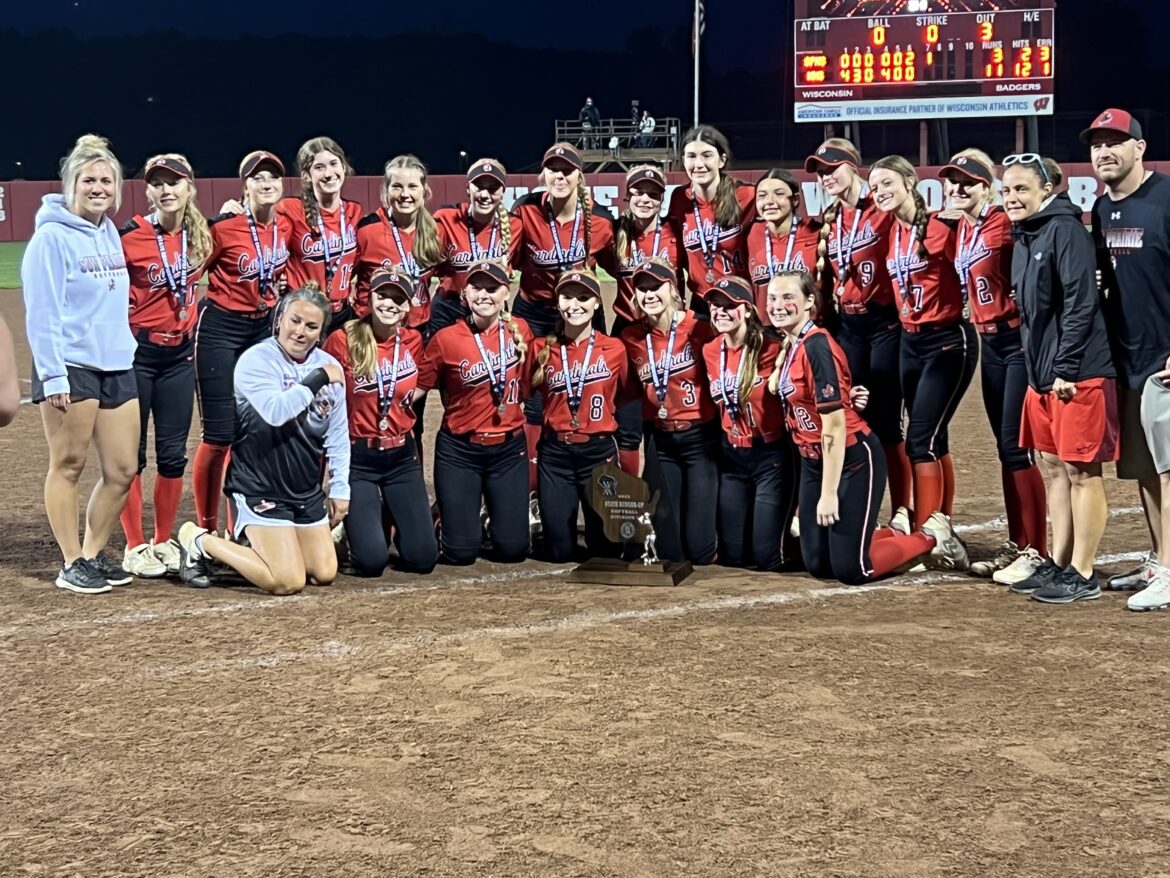 In its final season before Sun Prairie splits into two high schools, the Cardinals (29-2) fell to undefeated Kaukauna (31-0) in the WIAA state Championship game.

The Ghosts defeated Sun Prairie 11-3 Saturday night in a rematch of last year’s state championship that Kaukauna won 1-0. Kaukauna has claimed the state title in all four years it made the tournament, including 2010, 2017, 2021 and 2022. This was Sun Prairie’s fourth appearance in the championship game in a row, but it only ever won in 2018.

The starting lineups for both teams also included a pitching rematch from the 2021 state championship game, with Sun Prairie sophomore Tayler Baker and Kaukauna senior Skyler Calmes both in the circle.

Calmes was tested in the top of the first inning. Calmes put the first two Cardinal hitters on base, walking one and hitting another with a pitch. She secured two ground balls to record the first and second out while moving the runners to second and third base. Junior Sophia Royle worked a full count against Calmes before walking and loading the bases.

Senior catcher Anna LaCount caught Sophia Royle off guard and picked her off at first base, ending the inning. From there, all of the momentum was in Kaukauna’s favor.

Kaukauna came out firing in the first inning. The Ghosts’ speed and aggressive baserunning gave the Cardinals problems defensively. Both junior Venessa Veith and sophomore Grace Kramschuster committed errors in the inning. That, combined with some wild pitches and a home run from senior Hailey Wittman, put the Ghosts up 4-0.

“I think it was nerves, I think it’s excitement, not knowing,” Sun Prairie coach Jamie Olson said about the errors made throughout the game. “I think it was everything. It was [being] under the lights and going up against Kaukauna again.”

Gross was able to fend off the Ghosts until the fourth inning, when they tallied three more runs to extend the lead to 11-0.

Junior Isabel Royle was called in from center field to pitch the remainder of the game in the middle of the fourth inning. Isabel Royle completely shut Kaukauna down, allowing only one walk and no runs in the final three innings, while striking out four batters.

“This is my last year as a Cardinal, so I definitely wanted to do something for my team and go down with something positive,” Isabel Royle said. “As much as the score doesn’t show it, we weren’t ourselves in the beginning. We never gave up, and we fought hard.”

Kaukauna also changed pitchers after the fourth inning, calling Meredith from second base to relieve Calmes. Calmes finished the game without giving up a single hit in four innings.

Heading into the top of the sixth inning, Sun Prairie was still hitless. With two outs, junior Stella Ewoldt walked to bring freshman Luci Moreno to the plate. Moreno hit a soft ground ball that Kaukauna’s third baseman bobbled before throwing to first base, allowing Moreno to reach base safely. When the official score showed an error for Kaukauna rather than a hit for Sun Prairie, there was a collective groan from the Cardinal fans, but it kept the inning alive.

Olson called on sophomore Kenzie Longley to pinch hit in place of Baker. After taking four pitches from Meredith, Longley broke up the no hitter with a double to deep left center field that scored both runners, making it an 11-2 game.

“I just heard the energy in the dugout, I saw the right pitch and I took it [for a ride],” Longley said. “It felt like I was on cloud nine and like I just won the game for us. Even though it wasn’t the outcome we wanted, it was a win in our books.”

The only other hit for Sun Prairie came from Isabel Royle, who hit an RBI triple in the bottom of the seventh inning to bring about the final score of 11-3.

Sun Prairie has three seniors who will graduate this year: Chloe Knoernschild, Kennedy Schaefer and Ella Westphal. Knoernschild was primarily a catcher for the Cardinals throughout her career, but played left field for most of the playoffs until the second inning of the championship game.

“It was just a full circle moment and it really made me happy,” Knoernschild said. “I was willing to play anywhere if it meant that we were going to win, so I didn’t really care but it meant the world to me to be back [behind the plate].”

As many of Sun Prairie’s athletic teams did this year, the softball team took on the phrase “the final run” as the school will be splitting into Sun Prairie East and Sun Prairie West. Four returning starters will attend East next year, while three will attend West.