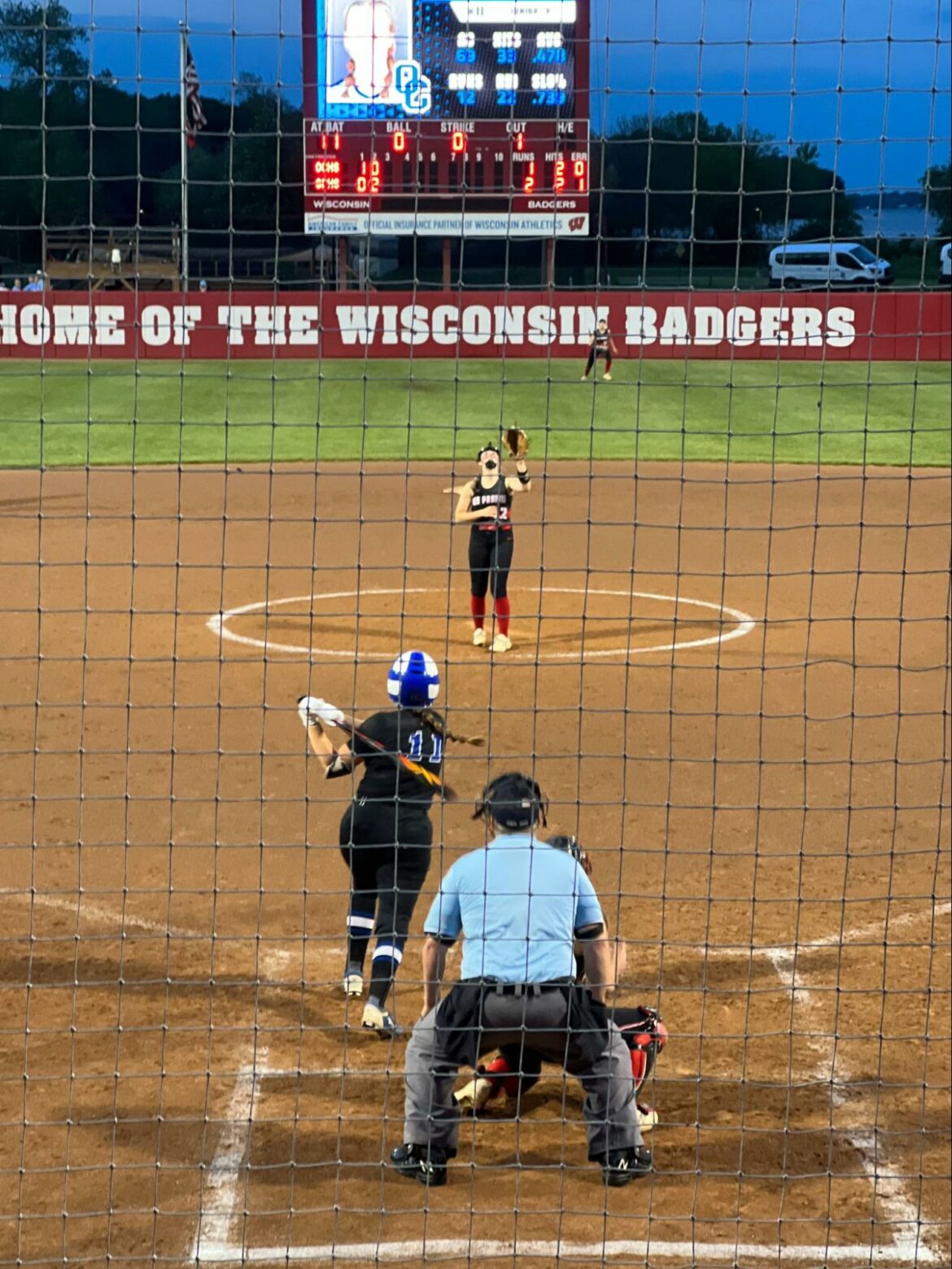 No. 2 Sun Prairie survived a seventh inning rally from No. 3 Oak Creek to make it back to the WIAA state championship game for the fourth tournament in a row.

Oak Creek struck first this time, scoring in the top of the first inning off of a single from junior Sierra Kilbourn, a double from junior Riley Grudzielanek and a wild pitch from Sun Prairie sophomore Tayler Baker.

The momentum quickly changed into the hands of the Cardinals in the bottom of the second inning. Junior Sophia Royle led off the inning with a walk, then stole second base. Sophomore Grace Kramschuster continued her hot streak by hitting a single up the middle that scored Sophia Royle. Junior Isabel Royle followed with a double that fell right in front of the Oak Creek left fielder, and junior Carly Gross hit a sacrifice fly to left field to score Kramschuster. After the end of the second inning, the Cardinals found themselves up 2-1.

Sun Prairie kept it rolling in the bottom of the third inning. With runners on second and third base, Oak Creek pulled their infield closer to home plate to try and prevent a run from scoring. With two outs, Sophia Royle hit the ball just out of the reach of Oak Creek junior shortstop Madisen Noll, but on the ball’s way to the outfield, it hit Baker, who was running to third.

Normally, when a batter hits a ball that then strikes a runner, the runner is called out, but because the infield was pulled in closer than the baseline, that rule does not take effect. In the confusion, some of Oak Creek’s players were trying to inform the umpires that the ball hit Baker, allowing both runners to score and Sophia Royle to reach third base. This pushed the lead to 4-1.

“Our players didn’t realize that it was a live ball, they were looking for the call,” Oak Creek coach Jeff Trask said. “We needed to just focus on getting the ball and shutting down the bleeding. That’s a tough lesson to learn in real time.”

The Knights did not lay down, scoring a run in the top of the fourth on a pair of doubles from junior Brianna Rickert and sophomore Emma Schmidt.

Oak Creek also managed to score in the top of the seventh inning, closing the gap to 4-3 before a final fly out to right field sealed the game for the Cardinals.

Both pitchers had decent games after pitching a full seven innings each Thursday morning. Grudzielanek even passed out from heat and exhaustion after Oak Creek’s game against Hamilton.

“My arm is a little sore, but I thought it would be worse so I’m doing pretty good,” Baker said. “I feel so ready to play tomorrow. I’m ready to go in there, get on top right away and keep the adrenaline going.”

While Noll provided most of Oak Creek’s offense in the first matchup, Kilbourn and Schmidt had the best day at the plate for the Knights. Kilbourn had two hits and two runs scored, while Schmidt had two hits, including the RBI double. Trask said he was really proud of how all four Oak Creek seniors were able to contribute by either getting a hit or scoring a run.

“I just wanted to make contact and hit it hard,” Sophia Royle said. “Afterwards, I was just beyond excited for the team. It gave us a big push of momentum for the rest of the game.”

The Cardinals had two uncharacteristic errors from senior second baseman Kennedy Schaefer. Both errors were when she was attempting to throw out Oak Creek senior slapper Natalie Fields at first base.

“Tomorrow is a new day,” Sun Prairie coach Jamie Olson said. “We will have practice in the morning, we will try to get those nerves out and try to make those adjustments. I’ve never seen that out of [Schaefer], and I hope I don’t see it tomorrow.”

Fields will graduate from Oak Creek Saturday morning and attend Edgewood College in the fall to play softball under coach Allie Taylor.

“I loved playing for Oak Creek softball, the players, the coaches, everyone has my back, I’ve got theirs and it’s been a really great experience,” Fields said. “I’ve met the [Edgewood] girls and the coaches. Kind of like what I said about Oak Creek, the atmosphere seems really supportive, they seem like they have a good time and I’m ready to have some fun playing softball in college.”

“I think we are definitely ready for some redemption against Kaukauna,” Sun Prairie senior Chloe Knoernschild said. “This means so much to me. I got very emotional after that last play. It’s insane to think that we have got to be [in the championship] three times, and I appreciate every moment of it.”