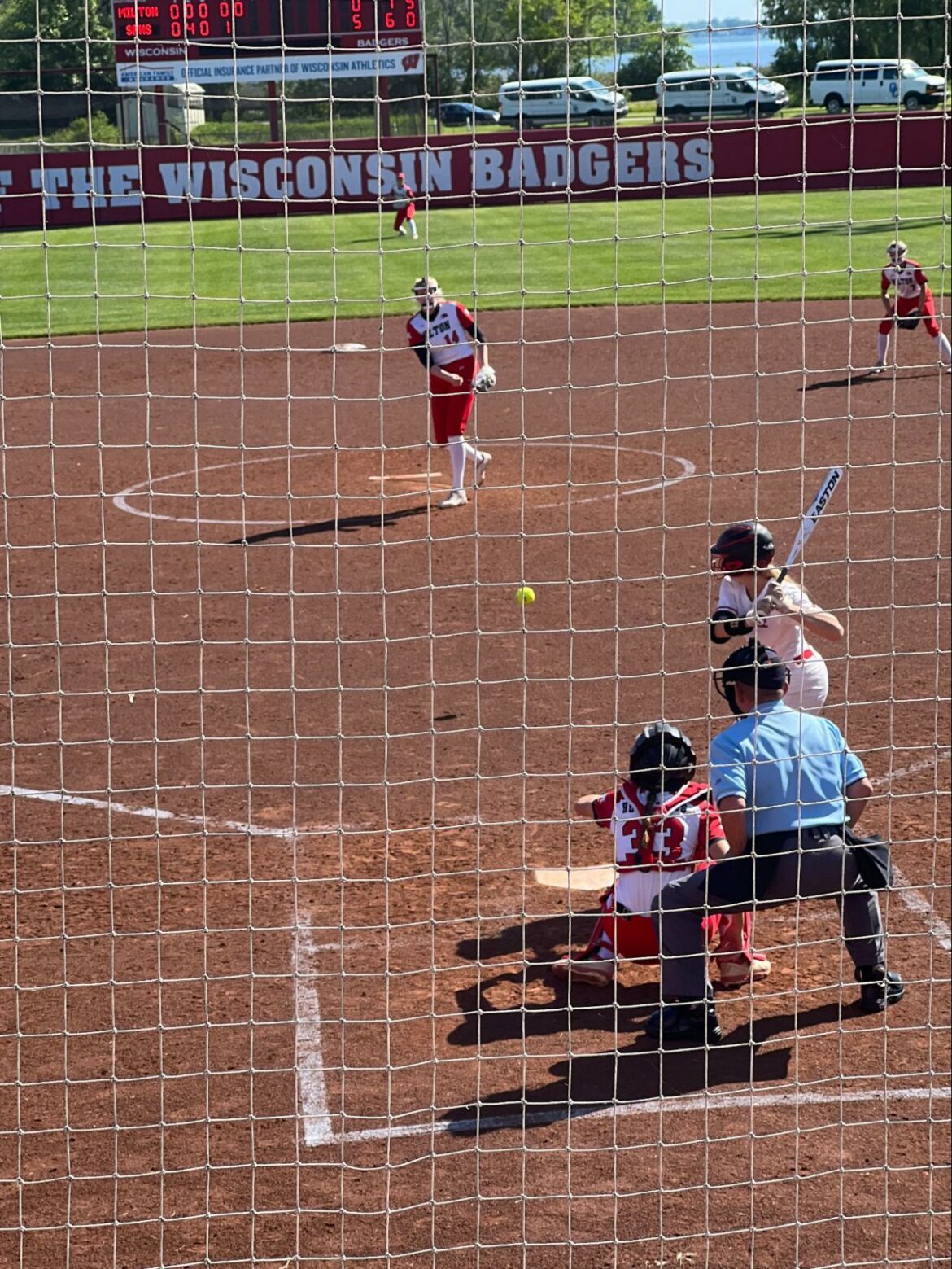 Baker and Kramschuster lead the Cardinals past the Red Hawks

Sun Prairie junior Tayler Baker had a strong performance on the mound Thursday to help the Cardinals make it back to the WIAA state semifinals.

Sun Prairie won the matchup 5-0. This was the first meeting this season between No. 2 Sun Prairie and No. 7 Milton. The game was held at the University of Wisconsin’s Goodman Softball Complex.

This was only Milton softball’s third appearance at the state tournament, while it is Sun Prairie’s eighth appearance and their fifth in a row.

“It feels really reassuring to win this game,” said Sun Prairie sophomore Grace Kramschuster. “It’s really exciting to get to go in tomorrow and play more.”

Tayler Baker was able to hold Milton’s offense down the entire game, finishing the game with 13 strikeouts and only allowing two hits on 93 pitches. Following both singles, Tayler Baker managed to strike out the next two batters to end the inning.

“[Tayler Baker] is a huge asset to our team,” Sun Prairie coach Jamie Olson said. “Her composure on the mound is unbelievable. She doesn’t get [frazzled] when there are runners on.”

Sun Prairie’s offense caused problems for Milton all day. Milton sophomore Gwen Baker allowed at least one runner every inning except the sixth.  The offense started in the first inning, when the first three batters for the Cardinals reached base before Gwen Baker struck out the following three to end the inning with no runs crossed.

Sun Prairie was able to break the ice in the second inning, starting with an inside-the-park home run by Kramschuster. The ball was hit on a line into right field before hopping over the Milton defender’s head and heading all the way to the wall, allowing Kramschuster to score.

“It was great to get things started,” Kramschuster said. “We left a lot of runners on, so we felt like we were in a negative spot. I felt really happy to bring the team back.”

The Cardinals went on to score three more runs in the inning, all unearned. The only other inning that Sun Prairie scored was in the bottom of the fourth, when a single from junior Sophia Royle brought senior Kennedy Schafer around to score.

“I don’t think [we] were seeing the ball that well,” Olson said. “We can’t leave 11 runners on base. We won’t win another game from here on out if we leave that many runners on.”

Milton struggled with errors, committing six throughout the game, while Sun Prairie’s defense was spotless.

“It’s great having them behind me and knowing they are always there to back me up,” Tayler Baker said. “Feeling comfortable if someone does get solid contact on the ball is amazing.”

Milton’s top hitters in the contest were seniors Ashley Vanderhei and senior Grace Schnell, who recorded one hit each.

Sun Prairie’s top performance came from Kramschuster, who finished with two hits, one home run, one RBI and one run.

“If [Kramschuster] gets her bat going, and she starts making contact like she did at the beginning of the year, she will be a hard player to recon with,” Olson said. “All I have to say is watch out.”

Sun Prairie will compete in the semifinals Friday night against Oak Creek.