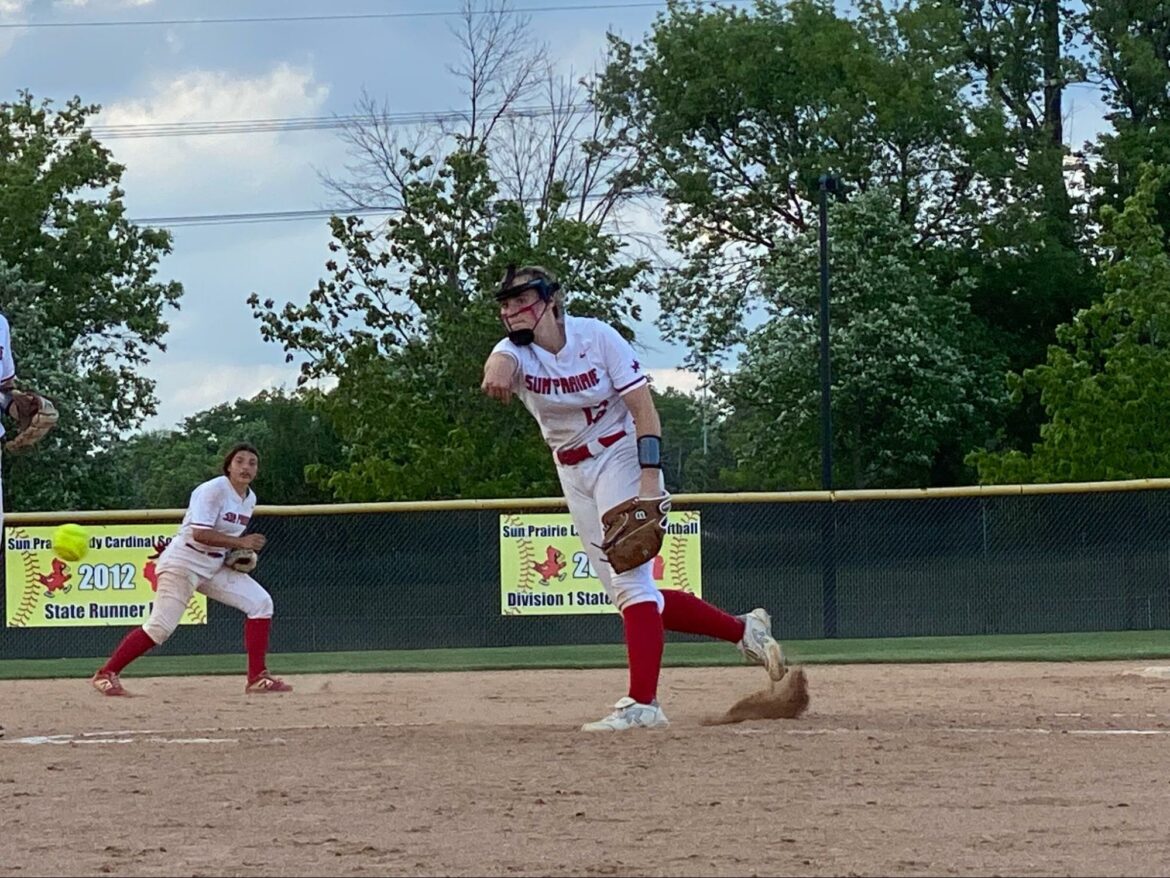 Cardinals’ new pitcher-catcher duo is finding success on the mound

SUN PRAIRIE, Wis. – The old adage that it’s extremely hard to beat a good team three times in a row — from legendary North Carolina basketball coach Dean Smith — is a phrase coaches often repeat when they sweep a team in the regular season, but fail to beat them in the playoffs.

No. 1 Sun Prairie did not have that problem Tuesday night when it defeated No. 5 Madison Memorial for the third time this season, with a final score of 10-0 in six innings. The sectional semifinal game at Sun Prairie High School clinched the Cardinals’ fifth sectional finals appearance in a row.

During the regular season sweep of Memorial, sophomore Tayler Baker threw a perfect game against the Spartans in their first matchup and shut them down 7-0 in the second meeting. Baker took the mound Tuesday night as well, but junior Vanessa Veith played catcher instead of senior Chloe Knoernschild, who had caught Baker every game during the regular season.

“I did it tonight, for the mere fact that I know, having [Knoernschild] out there in my outfield makes my outfield even stronger than what it has been,” Sun Prairie coach Jamie Olson said. “I know it is a big adjustment for [Knoernschild], and I know it is hard for her, in regards to stepping away and not taking over that catcher's role right now.”

The only other game where Veith caught Baker was last Thursday, when Sun Prairie beat Baraboo 9-1. The Cardinals’ run differential when the two are paired together is 19-1.

Baker only allowed two hits and two walks against Memorial, while striking out six batters in a complete game.

“It’s a little nerve-wracking because she pitches faster, and her pitches are different,” Veith said. “Just getting comfortable with her is important.”

The only hiccup between the two came in the top of the fifth. Veith received a fastball from Baker and then threw down to first base in an attempt to pick off the runner, but overthrew the first baseman, sailing the ball into right field.

Memorial’s starting pitcher, junior Andrea Jaskowiak, struggled to quiet the Cardinals’ hot bats, giving up eight hits and six earned runs in only three innings. Jaskowiak, who is verbally committed to the University of Iowa, threw 70 pitches in the three innings.

“[Jaskowiak] had a pretty tight zone today, and she just wasn’t hitting her spots,” Memorial coach Kourtney Peters said. “She did what she could for us, and she gave us everything that she had today. We could never ask for more.”

Memorial senior Emily Finkelmeyer came in from left field to relieve Jaskowiak in the fourth inning. Finkelmeyer finished the game, only giving up four hits and one earned run.

Memorial’s top batters in the contest were junior Hailey Ruff, sophomore Grace Capuano and sophomore Angela Carlsen. Ruff and Capuano recorded the only two hits for Memorial with a swinging bunt and a double to left field respectively. Carlsen finished the day 0-0 with two walks and was the only Spartan to not record an out at the plate.

Sun Prairie spent the last three practices focused on getting ready to hit against Jaskowiak, Olson said. “We just have to stay consistent. We can’t think that we are going to be able to [hit off of] every pitcher. We just have to get ourselves set and ready for the next one.”

One standout player for Sun Prairie was junior Sophia Royle, who was 3 for 4, hit a double, scored two runs and had the game-ending RBI.

“I knew we could have put the game away in the inning before, so I just wanted to pull through for my team,” Royle said. “I just told myself to sit back because the pitching change has a difference in speed.”

Memorial will lose six seniors next year, four of whom are in the team’s starting lineup, including Finkelmeyer, Veronica Carran, Merit Williams and Nicole Konrad. The graduating seniors were all freshmen during Peters’ first season coaching at Memorial.

“Their legacy is going to outlast the 24-game season that we had,” Peters said. “That was what we set out to do when they were freshmen, and they accomplished it.”

Carran is the only player looking to continue her softball career in college as a walk-on at UW-La Crosse, according to Peters.

Sun Prairie will play No. 2 Monona Grove on Thursday for a chance to go to the state tournament. The game will be held at Sun Prairie High School, but a coin flip will determine the home team 45 minutes prior to the first pitch.