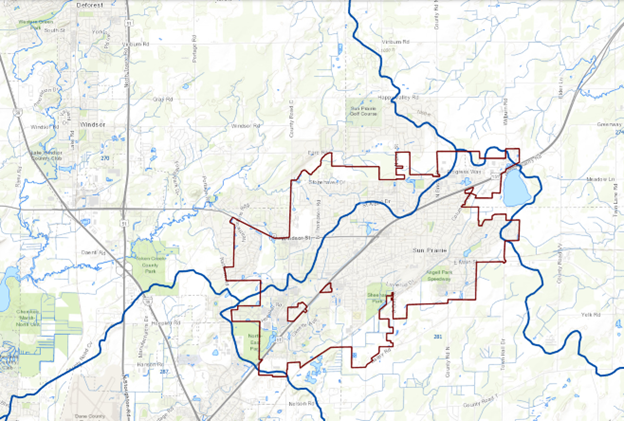 Sun Prairie got its name back in 1873, when a party of 45 men traveled through the rain for nine days straight to build a capitol for the Territory of Wisconsin. When they arrived at the prairie, they saw the sun for the first time in days, which they marked by carving “Sun Prairie” into a tree.

Unfortunately, the city hasn’t been so lucky in recent years when it comes to rain and storms.

Sun Prairie has struggled with floods throughout the city’s history. This includes one of the state’s most recent floods in 2008, when the rain outpaced the stormwater system, causing water to leak into the sewer system.

According to the National Weather Service, the 2008 flood was one of the five most significant floods in Wisconsin’s history. It was a torrential rainstorm that is only expected to happen once every 100 years. In the end, the flood caused an estimated $1.2 billion in damage.

“In [2008] it showed where those pressure points are and what areas are more likely to flood,” said Tom Veith, Sun Prairie’s Assistant City Engineer.

As  the 15-year anniversary of this flood approaches, it is worth investigating where the city stands in respect to flooding in 2022.

According to the Wisconsin Initiative on Climate Change Impacts, a project through the University of Wisconsin–Madison studying the trends and projections on precipitation and temperature, there has been 20% more precipitation in Dane County over the past half century. Researchers also predict that statistic will rise an extra 5% between 2041 and 2060. 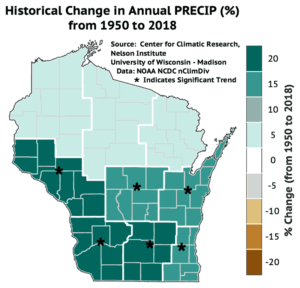 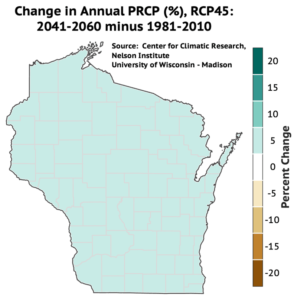 This means that climate change will lead to a large increase in “100 year events.” This is further supported by two of Wisconsin’s major floods coming during this time frame, in 1993 and 2008. While these numbers are not translating in the southern half of the state yet, northern Wisconsin has seen multiple “once in a lifetime” rainfalls in the last decade, according to Wisconsin Public Radio.

According to Risk Factor, a free online tool which estimates environmental threats to American properties, Sun Prairie has a “minor risk of flooding,” meaning flooding could affect the community at any given point over the next 30 years. Overall, Risk Factor says 356 different properties in Sun Prairie have a 26% chance of being severely affected by flooding at some point in that time frame.

A significant amount of saturated soil  and runoff from the Koshkonong Creek makes Sun Prairie susceptible to flooding.

“It has to do with the particle size of the soil,” said Dr. Chin Wu, a professor in the civil and environmental engineering department at UW–Madison. “When you have a small particle, water will bind these particles together and won’t let any more water infiltrate the soil.”

Rather than soaking into the ground, water will pool and become standing water in the presence of these hydric soils that are completely saturated with water.

Since the 2008 flood, Sun Prairie has contracted with MSA Professional Services, an engineering consulting company based in Madison, to study the flood and find solutions to better develop its infrastructure. This study helped identify different projects the city could work on to improve.

“We have had numerous stormwater projects over the 10 years I’ve been here,” Veith said.

Veith, a lifetime resident of Sun Prairie, attributes the completion of these individual project efforts to progress the city has seen over the past 15 years.

“As I travel around the city and see storm events, I am hearing from our staff that we do think it is performing better,” Veith said. “A lot of that is credit to our staff who are maintaining the infrastructure. Based on our long-range planning, I do think things are paying off.”

Sun Prairie has three different watersheds that drain water out of its system. The primary watershed is to the south, where the water eventually drains back into the Koshkonong Creek. Alongside the primary watershed, water can also drain to the northeast into the Maunesha River or northwest into Token Creek.

“We only do wastewater, so your stormwater that runs into the grates and stuff is a separate entity,” said Amanda Wegner of Madison Metropolitan Sewerage District. “There are some cities and states around the nation that have that, but we don’t have that in Dane County.”

This means extra stormwater will not cause wear on MMSD’s filtering equipment, contaminants will not get into the sewer system and the stormwater system can drain water effectively.

Sun Prairie is currently a growing community, creating an ever-growing need for an adept infrastructure that can  handle stormwater runoff.

“It is a double-edged sword,” Veith said. “Parking lots, rooftops and stuff like that will generate more runoff than farm fields will. The farm field has runoff as well, and with that carries different substances and potential contaminants.”

While this new development might create extra runoff, the county is requiring developers to implement stormwater solutions as they develop these areas. This might benefit the city,  but also might exacerbate any areas that currently face problems.

The central area of Sun Prairie is still at higher risk because of its age. Now, it’s important for the city to maintain these projects and educate people on ways they can help alleviate storm water themselves.

“When we talk about water, every little bit helps, so those are great ways for a resident to say ‘how can I help?’” Vieth said. “It has a real effect on our overall storm water capacity.”