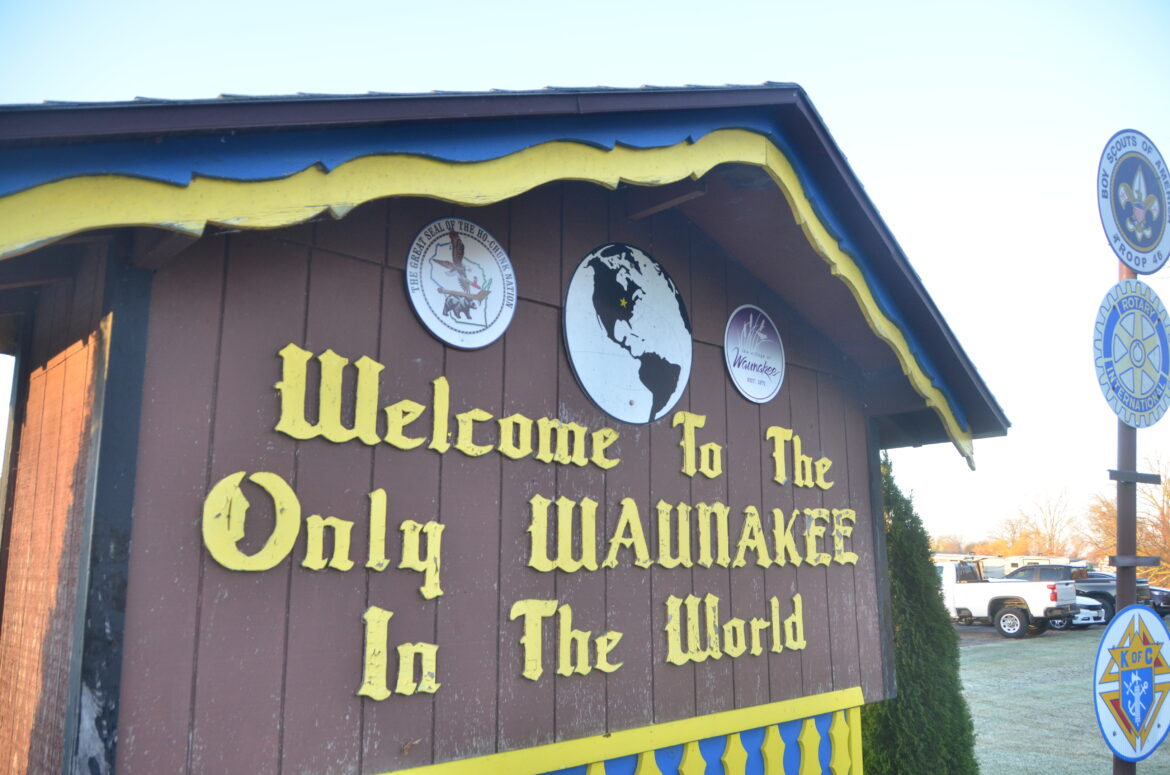 Members of the Village of Waunakee and the Ho-Chunk nation gathered earlier this month to raise the Ho-Chunk flag and honor their partnership as a village and nation. This flag will stay raised at Village Hall in November for Native American Heritage month.

This flag raising ceremony is one of many steps the Village of Waunakee is taking to establish a better relationship with the Ho-Chunk nation through their partnership with UniverCity Alliance.

Village Administrator Todd Schmidt said that the efforts started when Waunakee celebrated its 150th anniversary in 2021. The celebration was focused around the history of the village.

Village president Chris Zellner wanted to acknowledge the people who had been on that land much longer than Waunakee. At the time, Waunakee  had also been working with the UniverCity Year program on broader diversity, equity and inclusion projects, so they decided to consider more projects that would help relationship building with the Ho-Chunk nation.

“This desire to acknowledge the Ho-Chunk as part of our anniversary celebration became a more robust learning experience and recognition process,” Schmidt said. “And essentially the creation of a relationship between the village and the nation that had never existed before.”

Gavin Luter, the UniverCity managing director, said that when the village came to the alliance asking about a partnership with the Ho-Chunk nation, it was pretty clear they did not already have a relationship with the tribe .UCY helped the village to facilitate a meeting with Ho-Chunk leaders, who gave them suggestions on efforts they could make.

The two then coordinated employee training on Ho-Chunk history, worked with the school district on curriculum development, passed an official land acknowledgement statement, celebrated the Ho-Chunk canoe journey and flew the tribe’s   flag above Village Hall.

The village also added two tribal medallions to each of the four Waunakee signs— one being the seal of the Ho-Chunk nation, and the other the village logo.

Schmidt said there is a lot of positive feedback from the community on the projects.

Waunakee’s Village Board also unanimously approved a land acknowledgement statement in honor of the Ho-Chunk nation which acknowledged the history of the village and the people who used to occupy their land.

“When the Ho-Chunk Nation began to work collaboratively with the Village of Waunakee and other partners toward several culturally related projects, such as their Land Acknowledgement Statement, and HCN Cultural Resources Map, we began to realize there was a sincere effort and desire to right past wrongs towards the Ho-Chunk People,” Quackenbush said. “From this, we can now confidently state there has been a lasting relationship established that will be enjoyed by many, for many years to come.”

Schmidt has been in Waunakee for 12 years and said these are the first intentional efforts he has seen in the city outside of general acknowledgement.

The village has plans for future work to continue this relationship, according to Schmidt.

Gifts are a big deal in Ho-Chunk culture, so the village hired local artists to create a piece of artwork to present as a gift to the nation members. .

They also hope to continue the flag raising ceremony every November.

“This land acknowledgement statement isn't just words, but we like to confirm those words with actions and actions that will be ongoing,” Schmidt said.

The Wisconsin Policy Forum gave the Village of Waunakee the 2022 Salute to Local Government award this October for their efforts in diversity and inclusion, a recognition of their pursuit of racial equity and social justice through this partnership with UniverCity and the Ho-Chunk nation.

UCY has been a major part of this project, acting as the project manager and helping to facilitate these connections, according to Luter.

“It’s pretty cool that we've created a vehicle, a forum for communities to work on issues that are important to them,,” Luter said.

Luter said that UCY has a goal of connecting the university to the local communities and these communities to each other. They are doing more projects like this around the state.