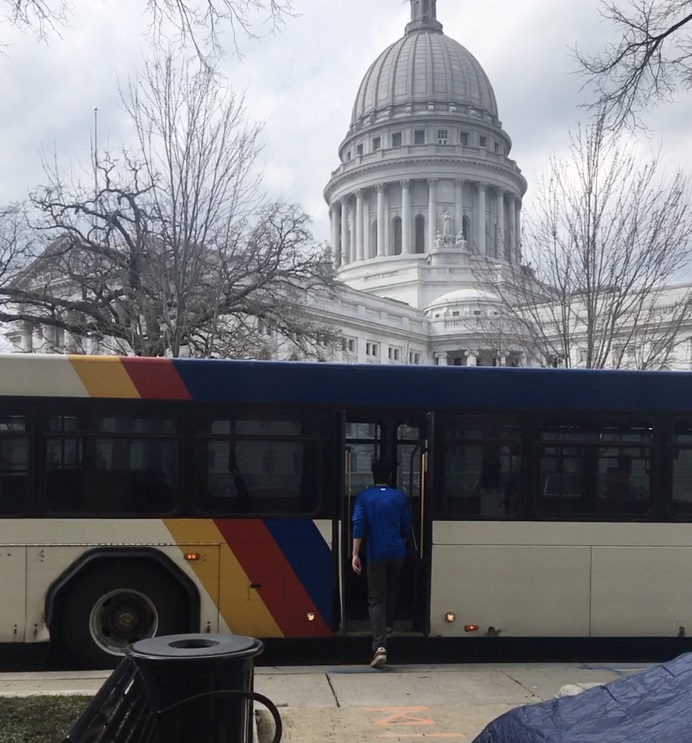 As of May 17, there are 12,571 positive cases and 453 deaths from COVID-19 in Wisconsin, and 537 and 25 respectively in Dane County. The numbers will be higher tomorrow. Madison Metro's administrative offices are closed to the public but its buses continue to operate.  Buses provide an essential service. Essential travel includes going to work, medical appointments and grocery stores. Passengers enter and exit the bus through the back door, if they’re able. Physical distancing limits passengers to a maximum of 15 at any one time. Extra buses may be employed if there is a need for them.  Buses run on a modified Saturday schedule. There is no fare collection, and buses are cleaned extensively on at least a daily basis. Even with such precaution, at least one operator has tested positive for having the virus, although some think it unlikely that it was contracted from a passenger.

How quickly things changed. Despite earlier press rumblings about the emergence of a new, sometimes fatal virus, the first local press mention that someone in Dane County had contracted COVID-19 did not appear until early February 2020. An unidentified person returning from China at the end of January had tested positive and voluntarily gone into self-isolation for a couple weeks. The World Health Organization may have declared COVID-19 a Public Health Emergency of International Concern on January 30, but this was the first known case in Wisconsin, while of more salience at the time was how bad our flu season was. The flu was hospitalizing if not killing victims. And ironically, a major conference on health policy attended by hundreds here in Wisconsin was held on March 2 at the Monona Terrace Convention Center.

It has been, and still is, a time of rapid change amid mixed and confusing messages. On the one hand we would read "Bartlett [community health supervisor for Public Health in Madison and Dane County] said the risk for getting COVID-19 remains low in Wisconsin. ..." (Feb. 29) and "Public health emergency not needed 'at this time' for COVID-19 coronavirus, state says" (March 5). On the other we would read "UW-Madison prepares for possibility of COVID-19 coronavirus outbreak, dusts off pandemic plan" (March 3), "Bus drivers, clerks and other workers who interact with the public fear exposure to coronavirus" (March 5) and "Coronavirus has halted ... concerts, festivals and movie premieres" (March 10).

We do know that Governor Evers declared a public health emergency on March 12, a day before President Trump proclaimed a National Emergency. We do know that the Governor's declaration was followed by a "Safer at Home" order issued with the head of the state's Department of Health to begin March 25 and now extended with modification to May 26. And we do know that after the declaration but before the order, the UW-Madison campus was abruptly shut down at the beginning of Spring Break on March 14, Madison College shut soon thereafter and the Madison Metropolitan School District suspended classes March 20.

Likewise Metro management, with more than a little encouragement from Metro workers, also enacted many safety enhancements after the Governor's declaration but before the "Safer at Home" order went into effect. Beginning March 18, Metro limited the number of passengers on a bus to 15, enhanced cleaning and disinfecting, and beginning March 24 required passengers to ENTER as well as exit the bus through the rear door if they could. Fares were not collected.

Maybe some public transit systems in Wisconsin such as in Green Bay, could shut down completely as a consequence of the declaration, but Madison's Metro Transit was considered an "essential service" that had to continue operating, even if in a significantly modified form. Indeed, some transit advocates saw the pandemic as an opportunity to argue that the essential nature of public transit often went unappreciated and misunderstood.

Continuing to operate, but with extra safety measures, was a huge contrast to transit agencies in many other parts of the country. Major news outlets ran harrowing stories of perilous, sometimes deadly, situations for "essential" passengers and operators. In fact, one story related how the Detroit, Michigan transit system only enacted safety regulations after a bus operator had contracted COVID-19 from a passenger and died. And only weeks after Metro had drastically modified its operations did the federal transit administration finally issue a Safety Advisory (SA 20-1 on April 14).

A major consequence of added restrictions to riding the bus was that ridership and farebox revenue dropped to less than a tenth of its normal level. Beginning March 23 Metro had started operating on a modified Saturday schedule all seven days of the week. Even so, Metro and other transit agencies were operating at a huge loss. In a piece that came out March 20, the national TransitCenter estimated that the annual financial impact of COVID-19 on transit agencies in the United States ranged somewhere between $26 billion and $40 billion. This piece, along with a campaign spearheaded by Transportation for America is credited with having $25 billion in aid to transit agencies included in Congress's multi-trillion dollar CARES (Coronavirus Aid, Relief and Economic Security) Act. Of this, Madison was allotted $24.4 million for capital, operating and other expenses, including overtime and administrative leave pay.

Nobody knows how or when things will open up again, or what it will look like when they do. Some speculate a lasting shift toward telework and a massive shift away from commuting to work by any mode, including the automobile. Others speculate that mass transit will only truly rebound after the emergence of a vaccine. At that point, it is conjectured, more people will have become sensitized to how huge a bite the car-centric lifestyle takes from a household's budget and will choose to travel less expensively by foot, wheelchair, bike or public transit.