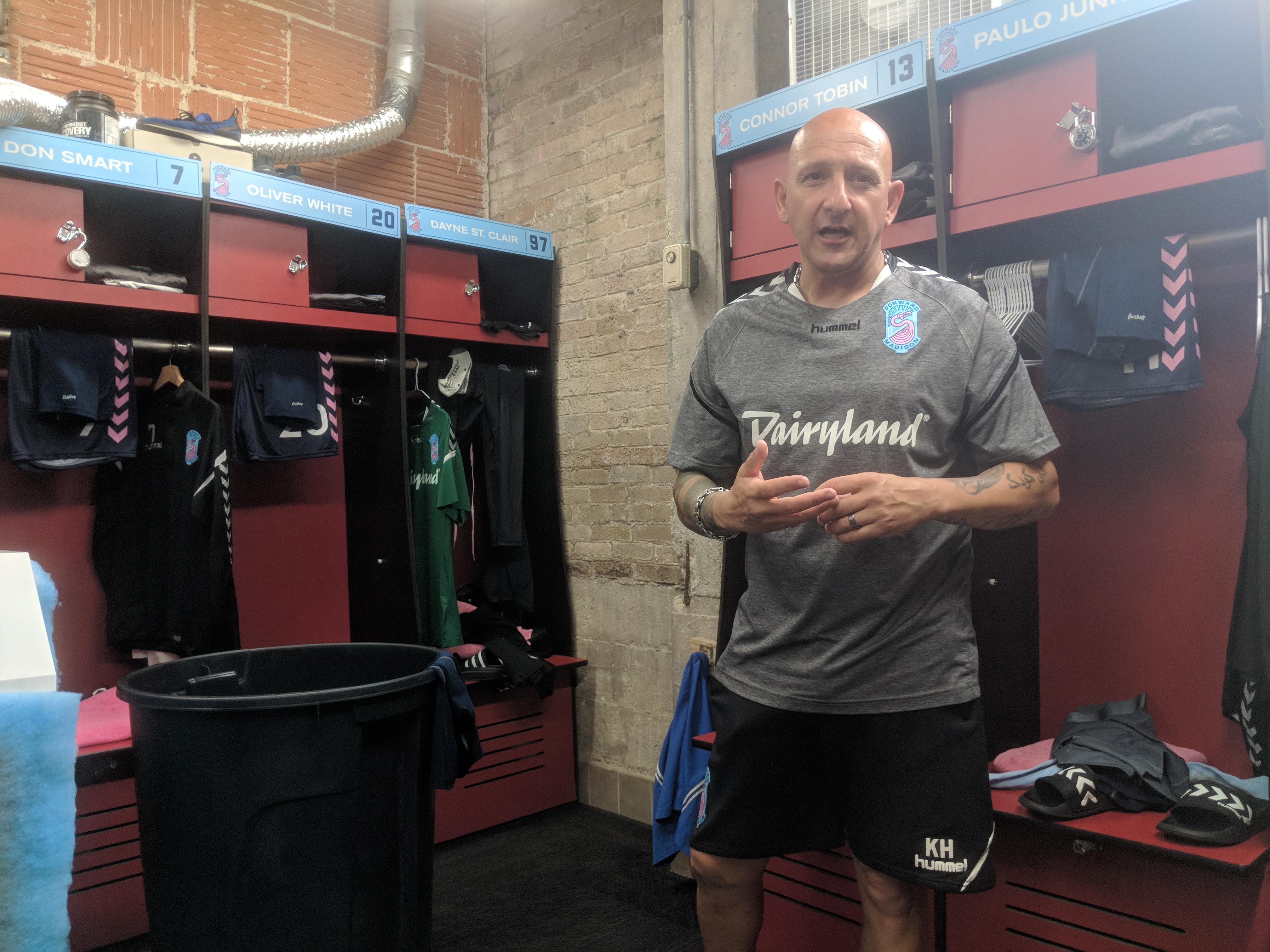 Kevin Harter has been in the locker room for a few hours already when I meet him in the cramped space under the stone grandstand at Breese Stevens Field. Still, he’s behind his usual schedule -- the Forward Madison FC equipment manager usually has the locker room prepped the night before home matches.

Forward Madison FC, playing in its first season in the inaugural season of the new 10-team USL League One, is the city’s first foray into professional soccer, and seems to have touched a nerve. With fans following the team on social media from literally around the world and home attendance that far outpaces the rest of the league, Forward Madison has embraced the quirky weirdness that is Madison -- including the adoption of the pink plastic flamingo as its mascot.

Harter’s official job description as equipment manager, or “kit man,” for Forward Madison FC, puts him in charge of cleaning, prepping, and organizing the team’s clothes and practice equipment. In Harter’s case, it also means coordinating logistics with host sites for away games, screenprinting fan gear, coordinating with Forward outfitter Hummel, ensuring that every player has his specific superstitious “lucky” thing for game day, DJing the hype music in Forward’s locker room before games, howling from the sidelines during the games, razzing players about their choices in facial hair, keeping his team from getting into it with officials, and generally having the time of his life.

Harter darts around the locker room as we chat, draping socks and training jerseys across individual lockers according to everyone’s individual preference – some guys get cut socks, others have to have specific undersocks. “A player does not need to worry about what they’re wearing or what they’re not wearing, they just need to come and perform. My job is to set them up for success,” Harter explains.

Harter, born in Iran, is universally known and loved as “K-Dog,” a nickname he picked up from the players he worked with early in his 25-year career. He became an avid soccer diehard as a kid, but wasn’t exactly a natural athlete. To stay connected to the game, he picked up work for a few years supporting indoor soccer players in Texas. When Major League Soccer (MLS) launched in 1996, Harter was quickly recruited as a kit man for Dallas FC (then the Dallas Burn), and continued to work for the league for the next decade.

Forward Madison head coach Daryl Shore brought K-Dog aboard the Forward technical staff after having known him from the MLS world; they worked together on the technical side of Real Salt Lake (RLS) for three years. Shore knows what the job entails.

When Shore started last fall as head coach of Forward, the team didn’t have a permanent kit guy or the budget to hire one, so they arranged for Harter to do some early consulting for the team in preseason to get ready for their first year.

“I think our ownership and our front office staff and our players saw how valuable it was, not only to have a kit guy, but to have one with K-Dog’s stature and experience,” Shore says.

It’s not always a glamorous job. Harter spends about four hours of his days manning the team’s laundry machines, and about eight hours during the winter, when the team needs to wear cold weather gear. “This is the best part of your job, right?” I joke. “It’s the worst,” he says.

Because there are so many moving pieces to his job, Harter makes sure to be overprepared. He spends an average of 12 hours a day at the stadium, packs bags two weeks in advance for away games, and never leaves Breese Stevens without having set up the locker room for the next day. He often comes in on his days off, just to make sure everything is running smoothly.

Coach Daryl Shore remembers meeting K-Dog back when both men were working with MLS teams. Shore and another coach were meeting with the head coach of the Dallas Burn, where K-Dog was working as a kit man. “The coach said ‘K-Dog, get these guys some gear,’ and K-Dog threw a t-shirt and a pair of shorts at me: ‘Here you go,’” Shore says.

Today, K-Dog still has a reputation among the team for zealous preparation. “He’s our right-hand man. He knows if we need something he’s right there with it,” Shore says. “He’s pretty much prepared for everything always,” assistant coach Neil Hlavaty adds.

Staying on top of the team’s logistics also helps Harter project a sense of calm and ease in the locker room. “I never panic. I don’t need to panic. Why do I need to panic?” he says with the intensity I have quickly come to expect. “What is there to panic about? I am responsible for this situation, so if something’s not right it’s because it’s on me.”

“I stay ready so I ain’t got to get ready,” he later adds.

Harter runs a tight ship in his locker room. “I’m not your maid, and I’m not your mama,” he tells me he stresses to players. Players who are late to practice or leave gear laying out have to spin the “fine wheel,” Harter’s accountability system, which includes punishments ranging from wearing the “mingo kit” (a pink crop top, named in a nod to the team’s flamingo mascot) to practice, to performing karaoke for teammates in the locker room. But that discipline seems to enable an easygoingness from players as they trickle into the locker room before today’s game: nobody is panicked, and everyone is excited to get out on the field.

But Harter’s unofficial work clearly runs much deeper than cones and laundry. He’s the team’s hype man, their mood regulator, and often a necessary buffer between players and officials.

“I’m that high school guidance counselor sometimes,” he tells me. “Not like ‘what do you want to be when you grow up,’ but more like ‘what’s going on? Talk to me, what can we do.’ And it’s never anything too big, it’s never something we can’t handle.” 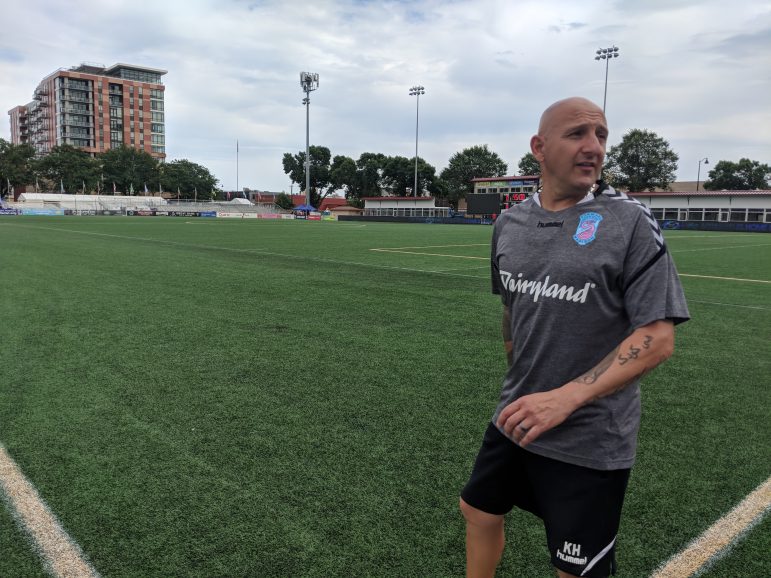 Team captain Connor Tobin speaks to K-Dog’s success in this role, saying, “He can check young players when they need to get checked, but also he can recognize situations before they become problematic. Sometimes it’s a matter of putting an arm around a guy or if he noticed something going on, he’ll have a conversation with me or the coaching staff to say, ‘we need to solve that.’”

“It’s a great set of eyes to have in the locker room,” Tobin adds.

Harter’s ability to connect well with players, he says, comes primarily from his genuine devotion to being himself. “It’s just being me. I don’t have to put on a front or a show. This is what you get every day from me. It’s the loud, obnoxious, go f*** yourself, have fun mentality. That’s the honest truth of how I am. And it serves its purpose,” he explains.

While K-Dog occupies a prominent place in the hearts of Forward Madison players and staff, USL’s budgetary restrictions mean that Forward Madison isn’t exactly rolling in funding for support staff like Harter. “He’s like the Rolls-Royce of kit guys, and we can’t afford Rolls-Royces,” Shore tells me.

What’s more, Harter’s wife and kids are back in Texas, and Madison is a little off their radar. Before taking the job with Forward, Harter says he “had no idea where Madison, Wisconsin was.” Predictably, he’s not a fan of the winter. K-Dog Facetimes with his wife during slow moments in the locker room, but the distance can be tough.

Despite the distance, Harter says his family is fully behind him. “She’s been in this with me for six years now. She knows what it takes,” he says. A former soccer player herself, he says she is “probably more passionate about this than I am.”

As for Harter himself, he’s committed to the gig for as long as Forward will have him. “I can’t see myself doing anything but this, being a kit man. I’ve had jobs in the past during the offseason or whatever, and I hated it. It’s not me. I’m not in my surroundings, I’m not in my element.”

If there’s a theme to Harter’s comments, it’s that successful soccer organizations function as cohesive unit from the team owners and coaches all the way down to the groundskeeping staff. Much of Harter’s job is wrapped up in acting as the glue between all these different factions. “At the end of the day, we are one,” he says over and over.

For the most part, this unity shows up during tonight’s game. Passes are clean, plays seem to connect, and the Forward guys get a few good shots on goal.

Throughout the game, K-Dog sits up on the bench, hopping down occasionally to walk players out to the officials during substitutions to offer any last-minute reassurance he can before players hit the field. While the team seems to be on point, the Kickers get a shot on goal in the second half, and Forward can’t get a matching shot in before the game closes out.

“When we don’t win, or say we draw a game that we should’ve won, we take that personally. We’re here every single day,” K-Dog tells me before the game. “People don’t understand how games affect kit guys.” True to form, K-Dog looks crushed when the game ends 0 – 1 for the Kickers. But when the team huddles up on the field to debrief, to take stock of what happened and regroup before heading over to greet the fans, K-Dog is dead center, part of the action, keeping the group’s heads held high.