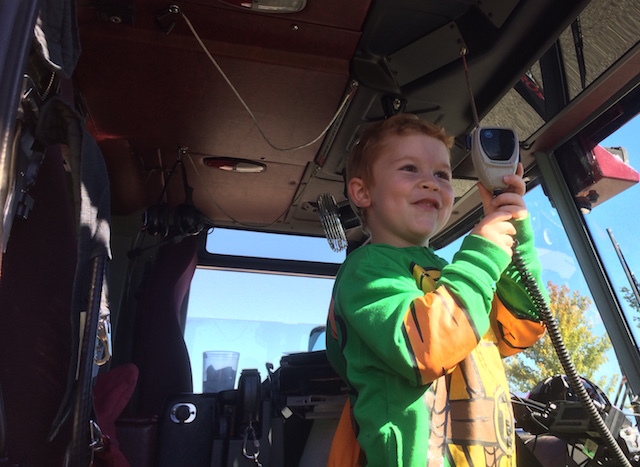 Families poured into Reindahl Park last Saturday morning to get an up-close look at the vehicles that quietly keep Madison running — and the people who drive them everyday.

Among the rigs on display at the Trucks & Treasures event were buses, a fire engine, an armored police rescue vehicle, and even a military Humvee.

But the trucks weren’t just for the looking: for this one day, the City of Madison Parks Division invited “kids of all ages” to climb inside and explore the vehicles for themselves.

“We love this event,” says Erin Nunez, who brought her kids for the fourth year in a row. “The kids get to explore the different trucks and the different parts of the city.”

This was Kennedy Kerrigan’s second Trucks & Treasure event. Last year she stayed in her baby carrier, but on Saturday the 18-month-old looked out from the driver’s seat of a huge red mower, the Toro Groundmaster 5900.

Jayme Johnson, who’s spent the last forty years driving buses for Madison Metro, understands the appeal. It’s the same thing the kids like about slipping behind the wheel of his bus.

“The fact that they can see out of the window … When they’re in a car in a carseat, they can’t see nothing,” Johnson said.

Judging by the din of honking, it would seem that the horn is quite popular too.

Across the lot, Ryan Richgels of Madison Streets and Recycling stood beside a single-axle 5-ton plow truck, one of about 16 that the city sends out for each plow shift. Richgels said that while adults might be angry when they encounter the plows, kids have a special relationship with them.

“They’re the ones who are always waving when you go by,” he said.

For parents, it’s not just a love of trucks that brought them out on this cool fall morning. As Adrian Nunez, 4, showed off his temporary tattoo of a Metro bus, his mom Erin Nunez explained that the event teaches kids about the inner workings of the city.

“I like seeing all of the city staff be proud of the jobs they do and how they help the residents,” she said.

Streets and Recycling staffer Ryan Richgels noted that kids aren’t the only ones learning: Adults have been stopping to ask him about his work.

“It gives them a good idea of all the equipment that everybody’s using in the city — what all the tax dollars are going toward,” Richgels said.

Cassandra Katz brought her children Israel, 2, and Tova, 4 months, because of Israel’s passion for trucks. But, as a mom, Katz was perhaps more interested in what was going on between the trucks.

“Every time we pass someone, everyone’s smiling and saying hello and introducing themselves and their kids,” she explained. “It’s really a good way to network Madison as a whole: west, south, east, and north.”

“That we have the resources to be able to do something like this … I think it just puts another notch in our belt of all the good things about Madison.”